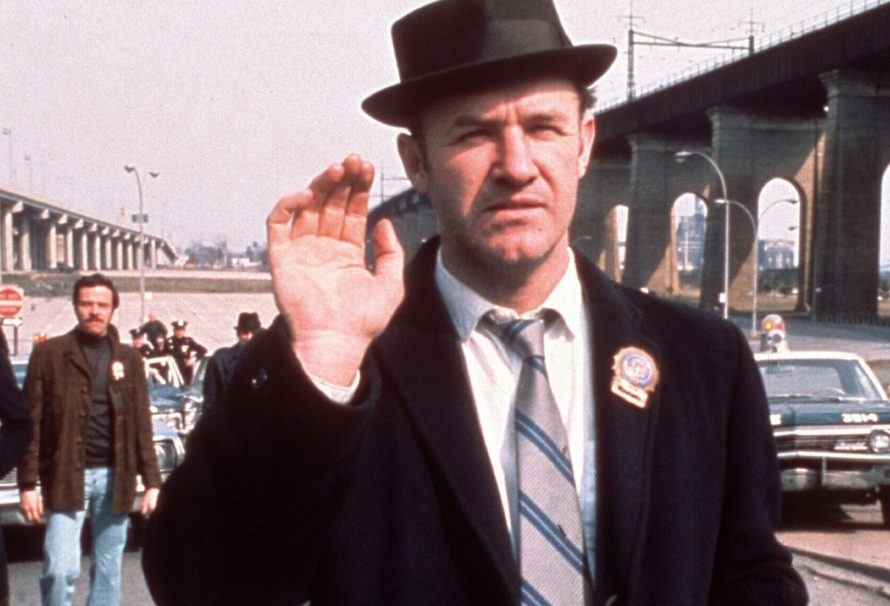 Truffaut’s famous dictum regarding the impossibility of ever making a truly anti-war film is, usually, equally applicable to movies about cops.

Today, in the wake of the murders of George Floyd, Breonna Taylor, and countless others at the hands of law enforcement, much of the cultural discourse has been focused on the role movies and television have played in shaping the public’s perception of cops. And although this has led to a lot of cheap moralizing and hand-wringing over the social and political responsibilities of art, it is impossible to deny that Hollywood has often been used as a propaganda factory by our nation’s police forces.

For no matter how morally complex, politically charged, hard-nosed, or clear-eyed a film is in depicting the systemic racism and inherent fascism of America’s law enforcement agencies and ‘Thin Blue Line’ mentality, the very subject of policing, when placed in a dramatic framework that highlights its attendant virtues and vices—power, violence, duty, honor, loyalty, obsession, order, tradition, retribution, brutality and, usually, tragedy; to say nothing of the requisite scenes of thrilling action, the profane poetry of street slang and police argot, and no shortage of sex appeal—simply proves too alluring to ever truly repulse.

But that’s not to say some filmmakers haven’t tried. There was one epoch of American cinema in which the movies at least attempted to reckon with policing’s heart of darkness: the bitter and chaotic decade that was the 1970s.

Born in the bloody aftermath of the Civil Rights and Anti-War movements, and calcified during the Watergate scandal, the movement known as New Hollywood carried an essentially defeatist ethos—“We blew it”—while presenting America as a failed experiment lorded over by sinister forces and broken institutions and populated by alienated and doomed lost souls. Nowhere was this more apparent than in the cop dramas of the day.

Adopting the dark, paranoid mood of classic film noir, writers and directors of the ‘70s took that genre’s innate cynicism and fatalism to new depths of despair. In place of morally stained or psychologically tormented cops ala those found in post-war crime dramas like Where the Sidewalk Ends (1950), On Dangerous Ground (1951), or Crime Wave (1953), the films of the American New Wave gave us the cop as borderline psychopath in the form of Dirty Harry’s Harry Callahan (Clint Eastwood) and The French Connection’s Popeye Doyle (Gene Hackman).

These new avatars of authority were brutish bullies and bone-deep misanthropes, with Dirty Harry’s famous description of its titular anti-hero—“Harry hates everybody: limeys, micks, Hebes, fat daggos, niggers, honkeys, chinks—you name it”—fitting Doyle equally well. They kicked back against newly instituted civil liberties like Miranda Rights by shooting first and asking questions later, personal consequences be damned. Their sole redeeming qualities were their unwavering commitment to their job, although by the end of each film, that’s also what precipitates their personal undoing. Without moralizing or talking down to their audience, these films reflected the immortal words of Mick Jagger: “Every cop is a criminal.”

But, perhaps predictably, this message was lost on a large section of moviegoers, who so admired characters like Callahan and Doyle—not in spite of their brutality, but for it—that their subsequent sequels and spin-offs (as well as the countless imitators they spawned) stripped them of these darker shadings and presented them instead as ideals of American justice.

This was generally the case as well with the boorish, sometimes satirical, often angry, but still innately sympathetic depiction of cops found in the decade’s other great police thrillers and comedies, such as Cotton Comes to Harlem, Fuzz, The New Centurions, The Seven Ups, Cops and Robbers, Detroit 9000, Busting, Freebie and the Bean, The Super Cops, The Choirboys and more.

Viewed today, their visceral deployment of hardboiled action (the car chases, good God in heaven, the car chases!) and/or gleefully amoral comedy combined with a pervading resentment towards bureaucratic authority and despair over societal decadence makes for a thematically and ideologically schizophrenic viewing experience—which, to be sure, some of us prefer to the pat political analogies found in today’s genre offerings. But they all still contain far more pathos, nuance and skepticism, as well as a blunter understanding of the innate injustice central to the American experience (especially when it comes to the treatment of minorities and the poor) than their ‘80s and ‘90s counterparts, which more often than not used their framework to hang the reactionary politics of Reagan and Bush-era conservatism.

Of course, many of these films were responding directly to a number of public scandals involving cops. The most famous of these, undoubtedly, is Serpico, Sidney Lumet’s critically acclaimed dramatization of the short career of officer Frank Serpico (Al Pacino), an NYPD whistleblower whose testimony against the rank corruption within the department was the centerpiece of New York City’s infamous Knapp Commission (or, The Commission to Investigate Alleged Police Corruption).

Along with Dirty Harry and The French Connection, Serpico is one of the quintessential ‘70’s cop movies. But while the film holds up as a sterling drama and snapshot of old, dirty New York, its ultimate advocacy of policing as an inherently noble and necessary calling—one that could function properly if only the system would root out its bad apples—reads as far too simplistic today. (Lumet would continue to probe the topic of police corruption throughout the following decades, most notably in his 1981 epic Prince of the City, which takes a murkier view of dirty cops and departmental whistleblowers.)

More relevant to our current state of affairs are a trio of unjustly forgotten minor masterpieces that came out over a three-year period: Top of the Heap (1972), Electra Glide in Blue (1973), and Report to the Commissioner (1975).

Perhaps the grimiest, bleakest of crime drama of the entire decade—though 1972’s equally brilliant Across 110th Street (which shared co-star Yaphet Kotto) and French Connection director William Fiendkin’s decade-closing horror show Cruising (1980) could challenge for that honor—Report to the Commissioner stars Michael Moriarty as an idealistic New York City detective turned sacrificial lamb after he accidently shoots a (female) undercover officer during a drug bust. The film’s major set-piece is a jaw-dropping section in the third act, in which Moriarty’s traumatized cop and an almost naked African American drug dealer hold each other at gunpoint inside a department store elevator. They eventually realize that cops on the other side of the doors are more than willing to kill both of them and so they must work together if they hope to get out alive. This being a ‘70’s film, let’s just say things don’t exactly go according to plan.

What makes Report to the Commissioner a far more illuminating watch than Serpico is its recognition that the biggest problems with police come not by way of easily recognizable forms of corruption like graft and thievery, but through their antipathy they hold and antagonism they display towards the very populace they’re meant to serve and protect, as well as the institutional drive towards self-preservation at all costs (these same themes would be picked up and examined more closely in HBO’s The Wire, by far the most important police narrative of the modern era).

Swapping out an urban hellscape for the Martian-like terrain of Arizona’s Monument Valley, Electra Glide in Blue—the only directorial effort of music producer James William Guercio—tells the similar story of a diminutive, but dogged motorcycle officer (Robert Blake, a notorious figure whose penchant for portraying both cops and psychotic killers deserves its own retrospective essay) seeking justice while attempting, and failing, to rectify his morals with the fascistic nature of his work. As in Report to the Commissioner, Electra Glide in Blue hauntingly charts a troubled cop’s crisis of conscience, resulting in him paying the ultimate Karmic price for the transgressions he’s committed in the name of the job.

The above summation also describes Top of the Heap, the most disturbingly relevant and essential film yet mentioned due to its foregrounding of a black perspective. Top of the Heap was written and directed by Christopher St. John. He also stars, playing a black cop in Washington D.C. who, between his deep self-loathing, troubled home life, the recent death of his mother and the daily barrage of racism directed his way from whites and blacks alike, finds himself losing track of reality. As with Guercio and Electra Glide in Blue, the film marks the sole directing credit of St. John. That’s a great disappointment, as it showcases an extraordinarily uncompromising and original personal vision, one that has far more in common with radical agitprop like The Spook Who Sat By the Door (1972) and experimental art films like Space is the Place (1974) than it does the Blaxploitation films it was erroneously lumped in with at the time of its release.

While most of the films within that genre—the majority of which were written and directed by white men, after all—displayed an overriding distrust for the police, they saved most of their ire for black dope pushers and pimps, as well as the Italian mafia, who were portrayed across so many of the previously mentioned films as the main source of crime and corruption within both metropolitan police departments and American society at large.

(The starkest examples of this can be found in The Super Cops, director Gordon Parks follow-up to the first two Shaft films, which shockingly goes out of its way to depict the Knapp Commission as a political witch hunt, while siding with rank and file white cops over its struggling black underclass.)

Throughout Top of the Heap, St. John’s tragic protagonist experiences hallucinations in which he imagines himself an astronaut. After ejecting from a rocket ship moments before it explodes, he finds himself lying in a hospital bed, confessing to a white superior officer: “I heard a voice. It kept saying to me: Get out of this machine. Get out of this machine.”

Taken as a whole, the cop movies of the 1970s have proven far more germane to our current moment than almost any made since. Of those, Top of the Heap sounded the most dire and direct warning about this country’s symbiotic, but poisonous relationship to its police forces.

We should heed that warning now—if it’s not already too late.

Can’t Stop What’s Coming: The Assassination of Jesse James, No Country for Old Men, and There Will Be Blood

Checking In On the Long, Long, Loooong-Running American Pie and Tremors Franchises