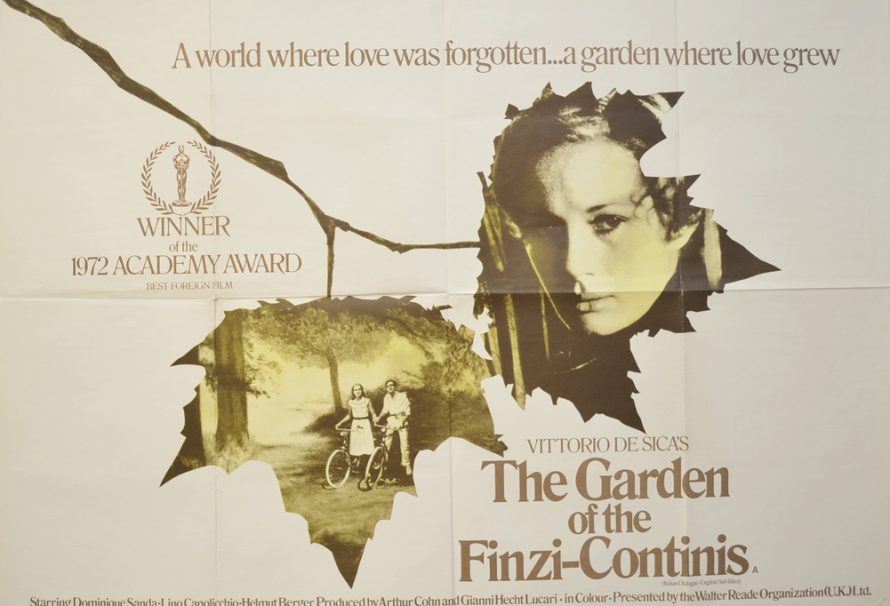 The Finzi-Contini family property is hidden behind towering stone walls, tucked away in a far corner of the city of Ferrara, an otherwise bustling hub of bicycles and businesses in Italy’s northeastern province of Emilia Romagna. Outside, it’s 1938 and the world is on the verge of cataclysm. But inside the garden all is verdant and serene. For generations, this is where the wealthy have lounged for languorous sunny afternoons of sport and leisure. Lately, the Finzi-Continis’ youngest daughter Micòl (Dominque Sanda) has begun bringing friends over for tennis, as they’ve suddenly found themselves unwelcome at Ferrara’s country clubs. Her friends, like Micòl and the rest of the Finzi-Continis, are Jews.

Based on Giorgio Bassani’s semi-autobiographical 1962 novel of the same name, Vittorio De Sica’s 1970 The Garden of the Finzi-Continis spends five years in Ferrara following the fortunes of two families. The film begins with gauzy, upward-looking glimpses of sun-dappled leaves and branches that drift in and out of focus, as if you’re awakening from an afternoon nap under the trees. It ends in the way we all knew was inevitable, with that beautifully maintained tennis court shrouded in a gray fog of war. To young Giorgio (Lino Capolicchio), a middle-class Jew who since childhood has been longing for his classmate Micòl from afar, an invitation to the Finzi-Contini’s palatial estate is a chance to visit Eden. It’s an idle paradise of denial.

Surely things won’t get much worse, these people insist, certain that their money and status can insulate them from what’s coming. Giorgio’s father (Romolo Valli) has a prominent position in the Fascist party, which for the time being has granted him exception to the draconian new restrictions placed upon Jews in Italy. Rules only apply to the poor and less-connected. And besides, even if his son’s presence is no longer tolerated at the public library, the boy can always study at the Finzi-Continis’, who have one of their own that’s more impressive than any municipal building. These characters look upon Mussolini’s edicts as temporary inconveniences. After all, it’s not like this is Nazi Germany.

One cannot help but think of that old adage about the frog in the pot, with the Finzi-Continis and friends slow to notice how the simmering temperature around them as it begins to boil. They’re more fixated on their personal problems anyway, especially Giorgio’s unrequited love for Micòl, for whom he has yearned since his schoolboy days spent trying to get a glimpse over those walls. But she’s impossible to get a read on, played by Sanda (who would go on to beguile audiences in Bertolucci’s The Conformist and 1900) as part sex object, part Sphinx. She has a way of seducing men and then shutting herself down, as if the family garden weren’t the only thing that’s walled off from the world. She tells Giorgio she’s incapable of loving him, that it would be like kissing a brother. His ardor is undeterred.

Malnate (Fabio Teste) is an outsider in the group, a Gentile and a communist who finds the bourgeoisie a little boring, if we’re being honest. Some friends and family members figure he’d be a good match for Micòl, but he’s got her all figured out, and besides, mixed marriages are already on their way to becoming illegal in Italy. Malnate actually seems more interested in her sickly brother Alberto, and at times it’s tough to tell if their frisky, pansexual chemistry is intentional in De Sica’s script or if it’s just because Alberto is played by Helmut Berger. Yet all these shallow attractions and entanglements will soon seem both trivial and tragic when at last intruded upon by the world raging beyond these garden walls.

In the 1940s De Sica had all but invented the Italian neorealist movement with multiple masterpieces like Shoeshine, Bicycle Thieves and Umberto D. By the ‘60s he’d fallen out of favor with critics, taking undistinguished work to cover his gambling debts and directing silly Sophia Loren comedies. The Garden of the Finzi-Continis was hailed as a return to form for the filmmaker by nearly everyone except Giorgio Bassani, who was so incensed by changes to his novel that he demanded that his name be removed from the credits. De Sica died of lung cancer in 1974, two years after Finzi-Continis won him his fourth Oscar for Best Foreign Language Film.

It remains an achingly beautiful cautionary tale about the blindness of privilege, a movie rich with longing and loss. De Sica ditched the novel’s narration, wisely understanding that the opening title card “Ferrara, 1938-1943” already tells us all we need to know. He allows history to cast a ghostly pallor over the film’s frivolity, and it’s impossible to watch The Garden of the Finzi-Continis in today’s political climate without feeling a chill every time one of the characters shrugs off another sign of encroaching authoritarianism, blithely believing such horrors couldn’t possibly happen so close to home.

“The Garden of the Finzi-Continis” is streaming on Amazon Prime.

The Player: The ‘90s Heyday of Screenwriter Michael Tolkin