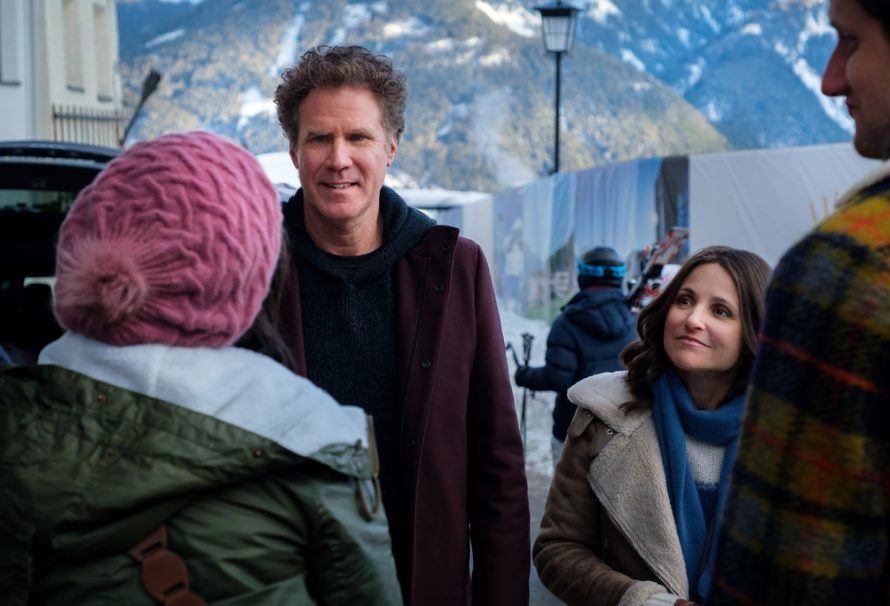 From their screenplay for Alexander Payne’s The Descendants to their joint directorial debut, 2013’s The Way Way Back, Nat Faxon and Jim Rash have specialized in fractious family units whose members have to come to terms with one another in the midst of emotional upheaval. That trend continues with Downhill, their loose adaptation (co-scripted with frequent Chris Morris and Armando Iannucci collaborator Jesse Armstrong) of Ruben Östlund’s Force Majeure. One of the most piercingly funny films of 2014, Force Majeure put a Swedish family vacationing in the French Alps under the microscope after its nominal head behaves in a cowardly fashion in what looked like a life-threatening situation. (In this way, its jaundiced view of modern masculinity rivals that of Julia Loktev’s The Loneliest Planet.)

Faxon and Rash repeat the inciting event from Östlund’s film almost beat-for-beat in Downhill, sending a “controlled” avalanche in the direction of the Austrian ski resort where all-American family man Pete Stanton (Will Ferrell), his wife Billie (Julia Louis-Dreyfus, appearing in her first feature since Veep wrapped), and their two sons are spending some quality time together. The quality goes way down, however, after Peter grabs his phone and books, leaving Billie and the kids to fend for themselves as a wall of snow envelops the outdoor restaurant where they’ve gone for lunch. As it turns out, there was no real danger, but the damage has been done in other respects; Pete is left to defend the indefensible, and try to find a way to redeem himself in the perpetually narrowed eyes of his family.

Faxon and Rash lift a few other scenes and moments directly out of Östlund’s script; one highlight is the awkward evening with Pete’s much younger work colleague Zach (Zach Woods), whom he has been sneak-texting with, and his free-spirited girlfriend Rosie (Zoe Chao), who has been encouraging Zach’s spontaneous side. Pete hopes that the younger couple’s presence will smooth things over, but Billie’s feathers are ruffled even more when he downplays what happened, and directly contradicts her account of it.

Another carryover from Force Majeure is the character of the proudly adulterous Charlotte, who has been reconceived as the hostess of the resort, which she calls “the Ibiza of the Alps.” As played by Miranda Otto, her instant familiarity with Billie is reminiscent of Selina Meyer’s strained relationship with Minna, the Finnish head of state on Veep, but Charlotte’s main function is to set Billie up with a hunky Italian ski instructor when she takes a “solo day” away from Pete and the boys (whose outing at the adjacent family park results in less bonding than any of them would like). This leads to one of the film’s moments of incongruous physical comedy, when Billie is caught masturbating in a public restroom – a scene that gives Louis-Dreyfus something to do (other than fume at her husband) without being terribly inspired. Ditto Ferrell’s drunk scene, as Pete and Zach go out clubbing and Pete attempts to assert his manhood in the most foolish way possible.

The main trouble with Downhill is, unlike Pete’s family, Faxon and Rash seem all too eager to let him off the hook and remove as much of the ambiguity from the situation as possible, especially when it comes to the film’s shrug of an ending. Coupled with the easy jokes (people who use hashtags! Knight Rider in German!), their inclination to spell everything out shortchanges the audience, relieving them of pondering the existential dilemma the Stantons have come face to face with. This is exemplified by how the bathroom mirror shots from Force Majeure have been restaged so Pete and Billie don’t actually have to look at each other (or pointedly look away from each other) while contemplating the growing division between them. Then again, all Pete has to offer are platitudes like “Every day is all we have” (a saying inherited from his late father), so it’s not as if he’s accustomed to deep reflection anyway.

Watch This: The Lovebirds