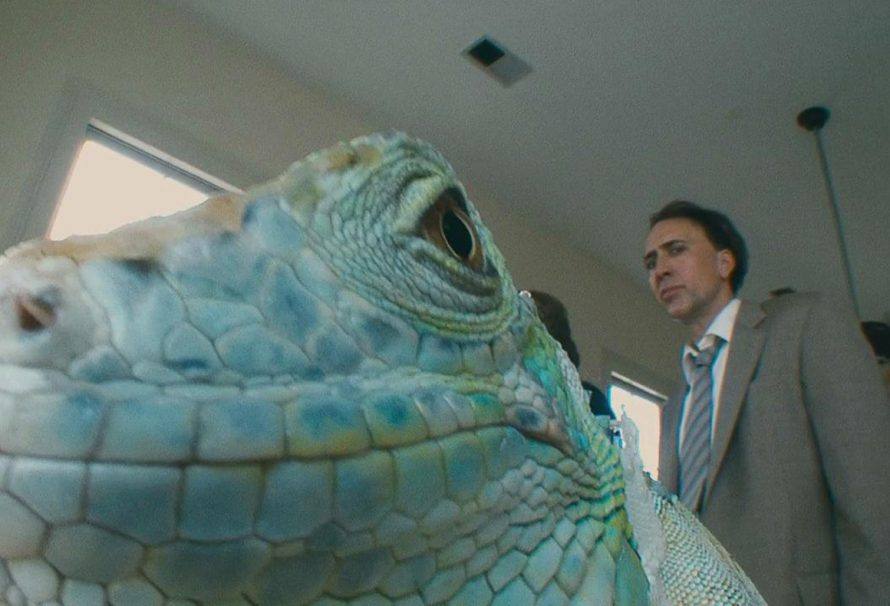 Werner Herzog’s filmography has routinely defied the kind of easily-categorized visual trademarks that define his auteurist colleagues. Lighting, lenses, angles, palette — rarely do two Herzog films resemble one another aesthetically. Yet amid his diverse visuals consistency can be found in his themes: obsession, hubris, and conflict with nature. The asphalt jungle of a hard-boiled urban detective drama like 2009’s Bad Lieutenant: Port of Call – New Orleans is loaded with obsession and hubris, but is the last place you’d expect to find commentary about nature. Yet the natural world is infused throughout the sleazy odyssey of Nicolas Cage’s corrupt and opiate-addicted Detective McDonagh as he frantically tries to solve a mass murder while staying one step ahead of an out-of-control gambling habit. In Bad Lieutenant, nature exists to remind the viewer not only of the futility of man’s brief existence in relation to the amaranthine lifespan of the Earth, but how the human race is still much closer to our more primitive forms of existence than we would like to believe.

Man’s relationship with nature in Herzog’s films is often described as “conflict,” but that gives humanity too much credit. Nature exists as a passive observer, and the snakes, alligators, iguanas (imaginary or otherwise), even weather patterns of the film’s coastal Louisiana setting exude total indifference to the human drama unfolding in their midst. The opening scene takes place in the aftermath of Hurricane Katrina, where a poisonous snake swims with ease through the floodwaters towards a terrified prisoner trapped in a cell. Man built the levees to contain the river, and he built the prison to contain the criminals, and Nature has effortlessly dismantled them both, the water and the animals rushing to reclaim their natural habitat. The grimy and decrepit post-flood cityscapes where the majority of the film takes place are a reminder not only of the state of McDonagh’s opiate-ravaged body and mind, but the unavoidable destruction Nature is ready to unleash at any moment on our precariously-constructed civilization.

Of the animal life featured in Bad Lieutenant, the reptile is the most well-represented. In a film so steeped in carnal desires and primal desperation, the presence of one of the most primitive forms of life seems appropriate. The popular theory of the “lizard brain” suggests that our most base and uncivilized urges come from a part of the brain shared by our cold-blooded neighbors. Nicolas Cage may be one of our finest lizard brain performers; no other actor so intuitively inhabits characters possessed by raw mania, lust, and rage. As Herzog himself remarks in the book Werner Herzog: A Guide for the Perplexed, “There is nothing more wondrous than seeing Nicolas Cage and a lizard together in one shot.” So naturally the film’s most famous scene is a surreal, one-minute shot of a pair of iguanas that only McDonagh—his rational brain coked back to the Cretaceous—can see. With its shaky fisheye view from ground-level, even the camera itself seems to have devolved.

As liberating as raw, lizard-brain emotions can be, they represent a burden in Bad Lieutenant because of the expectations of human civilization to rise above our most base and violent desires. McDonagh doesn’t want to exist this way, but the needs of his primitive body outweigh the aspirations of evolved morality. His childhood home in a verdant and isolated patch of wilderness encapsulates the tranquil innocence he longs to revert to, as does the blissfully indifferent labrador retriever he is forced to taxi around New Orleans. McDonagh resists the domesticity the dog represents even as he secretly aspires to it, pawning off the pup to his girlfriend Frankie (Eva Mendes), his relationship with her another step towards domesticity he is unable to take.

Beyond canine domesticity and reptilian primitivism lies an even more primordial state of existence, where the cares of civilized responsibility and the chaos of the pleasure-drive drift away amid the peaceful void of the sea. Fish are featured twice in Bad Lieutenant, and in both instances their presence brings a calming reprieve from McDonagh’s chaotic existence. Amidst the blood-soaked horror of a massacred family he discovers a betta fish left behind by a murdered child. As the camera focuses on the fish with flowing, cloud-like fins, the ethereal chimes of Mark Isham’s score invoke a moment of dreamy contentment in the midst of McDonagh’s turbulent reality.

By the end of the film McDonagh seems to have willed that dream of contentment into existence. We see an idyllic-seeming conclusion to his story, his environment of green grass and rainbow flowers bathed in soft golden light. It’s a noticeable contrast to the drab slate-blues of urban decay that have dominated his story up to that point. He has apparently tamed his chaotic lizard brain and embraced domesticity, complete with pregnant wife, house, and dog — the quintessential American dream. But then, with a trip to the aptly-named Gator’s Retreat nightclub, the dream ends and McDonagh is back in his familiar pattern of corruption and drugs. As he sits in a seedy motel room with piles of cocaine laid out before him he wonders aloud if fish dream. The film closes at the aquarium, McDonagh enveloped by the blue of the water and entranced by the silent, graceful motion of creatures who were here long before mankind arrived and will exist long after we’ve gone.

The Young Girls of Rochefort in the Social Isolation Era

Watch This: Get Duked!