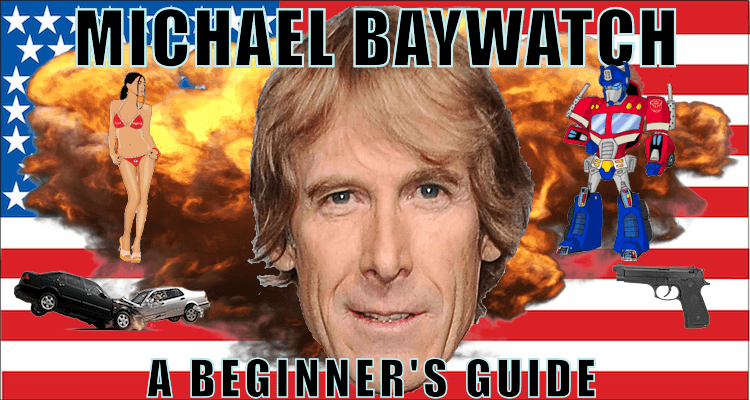 As the world edges closer and closer to the release of Transformers: The Last Knight, Craig J. Clark is mapping the road that led Michael Bay — and the rest of us — here. Here’s the rub: Before he embarked on this project, Craig had never seen a Michael Bay movie. And it’s too late for him to turn back now.

Since Michael Bay made the first three Transformers movies in succession — with nary a detour between them — it is not only possible but preferable to consider them as a single unit. Produced in association with Hasbro (the kind of credit any serious filmmaker dreams of having affixed to their work) and under the aegis of executive producer Steven Spielberg, whose DreamWorks Pictures went halfsies on the first two with Paramount, the tri-part Saga of Sam Witwicky and the Giant, Destructive Alien Robots He Befriends took four deafening years to tell and exhausted no fewer than three writers in the process.

The first, John Rogers, only received a story credit on the original, which was substantially rewritten by Roberto Orci and Alex Kurtzman, late of The Island. They, in turn, bowed out after 2009’s Revenge of the Fallen, which means the last screenwriter standing, Ehren Kruger, became the second after Randall Wallace (Pearl Harbor) to get sole credit on a Bay film when he penned 2011’s Dark of the Moon all by his lonesome.

Dark of the Moon, incidentally, marked my only previous brush with Bay’s oeuvre — outside of the occasional movie trailer or Meat Loaf video. It happened about five years ago at a pizza place where I went with a couple of friends to grab a quick bite. While we waited for our slices, I noticed the television mounted on the wall was showing one of the Transformers movies, so I made a point of sitting with my back to it so I wouldn’t be tempted to look at it. The whole time we were there, all I heard for minutes on end was people shouting, intermittent gunfire, things exploding, and glass breaking. It wasn’t until I watched Dark of the Moon recently that I recognized those sounds and saw the sequence Bay and his effects crew likely spent weeks shooting and compositing his actors into: the collapse of a Chicago office building with the film’s heroes inside. Impressive as it is — and it is spectacular in every sense of the word — it is also spectacularly hollow, which pretty much sums up my attitude toward the franchise as a whole. One needn’t have grown up with the’80s cartoon or any of its follow-ups to feel the same way.

Nowadays, Shia LaBeouf is best known for, well, being Shia LaBeouf, but when he was cast in 2007’s Transformers he was still Shia LaBeouf, jobbing actor. As the flesh-and-blood anchor of a movie trilogy where the real stars are made up of ones and zeroes, LaBeouf grew into his character as they both came of age.

When he’s introduced, Sam Witwicky is an unpopular high school student hawking his grandfather’s effects on eBay so he can afford to buy his first car. Two years later, his rite of passage is that he’s going to college. And in the third film, he’s fresh out of school (meaning he either finished his degree in two years, which is unlikely, or Dark of the Moon is set in the year 2013, which is just bizarre) and working on landing his first job. He’s also intent on holding onto his current, way-out-of-his-league girlfriend, who replaced his previous way-out-of-his-league girlfriend, but in all these efforts he’s hindered by the machinations of the giant, destructive alien robots who periodically drop into his life and are cosmically incapable of leaving him alone.

In addition to LaBeouf, there are a handful of constants across the three films, chief among them Josh Duhamel’s military commander William Lennox, who rises in the ranks from captain (in Qatar, where he and his men have humanity’s first modern-day encounter with a Decepticon) to lieutenant colonel (in charge of the government’s human/Autobot strike force) over the course of the series; and Tyrese Gibson as one of his men, who morphs into quite the quipster. They’re followed closely by John Turturro’s Agent Simmons, who goes from being the buffoonish head of a secret government agency, to a disgraced conspiracy theorist who works in a deli and lives with his mother, to a famous author with a hot German manservant. (As one of the franchise’s reliable sources of comic relief, Simmons also suffers the indignity of being “lubricated” by Bumblebee in the first film and nearly tea-bagged by a Decepticon in the second. “I am directly below enemy scrotum” is an actual line Turturro was paid to say in a 200-million-dollar movie.)

Then there are Sam’s parents, Ron and Judy, played by Kevin Dunn and Julie White. While Dunn relishes playing up Ron’s cheapskate nature (one of the first things he does is drive Sam past a Porsche dealership on their way to the used-car lot where they buy Bumblebee), White’s spacey performance is less endearing, reaching maximum cringe levels after she eats a pot brownie when they drop Sam off at college.

The humans aren’t the only ones whose parts are designed to tickle the funny bone, though. In fact, a lot of the comedic heavy lifting in the films falls on the metal shoulders of the Transformers themselves — primarily the Autobots. Take the extended scene in the first film of them hiding in the Witwickys’ carefully tended backyard, which they proceed to ruin, or every teeth-grinding scene with “The Twins” in Revenge of the Fallen, or the two-robot team of Wheelie and Brains in Dark of the Moon. Even the Decepticons occasionally get in on the act, since the smaller ones behave like Joe Dante’s Gremlins — and the parallel doesn’t stop there since there’s a New Batch-like tendency to brand each new Autobot with a strange accent and/or look. How else to explain the Q-like Que’s resemblance to Albert Einstein or The Wreckers being Australian?

As for the films’ villains, they come in two flavors: human and Decepticon. While Agent Simmons in Transformers and the bossy NSA liaison in Revenge of the Fallen are easily duped pawns, it isn’t until Dark of the Moon that the series introduces a full-fledged traitor to his fellow man in the form of Patrick Dempsey, who gives Shia LaBeouf someone his own size to fight for once. (Frances McDormand, who picks up a check in the third film as the National Intelligence Director, also falls into the “duped pawn” category.) The Decepticons, meanwhile, manipulate Earthlings and our technology to achieve their goals: 1) revive Megatron (voiced by Hugo Weaving) and learn the location of the Allspark; 2) learn where Megatron was dumped at the end of the first film along with the location of an alternate source of Energon; 3) retrieve Sentinel Prime from the dark side of the moon so the Space Bridge can be completed and their home planet of Cybertron transported to Earth. In the process they: 1) attack downtown Los Angeles (a rare example of a destructive skirmish being moved by the good guys to a densely populated area); 2) trash an Egyptian pyramid; and 3) nearly level Chicago. It’s all in a day’s work when you don’t particularly care where you stage your intergalactic war.

And what is warfare without a few casualties? In each film, viewers bear witness to the grisly demise of at least one beloved Autobot and/or dastardly Decepticon of note. In Transformers, fan favorite Jazz is ripped in half by Megatron, while the sequel sees Decepticon leader The Fallen (voiced by Tony Todd) utterly annihilated by Optimus Prime. All bets are off in Dark of the Moon, though, with good guys and bad guys alike getting blown up and rent asunder. (Prime’s favorite finishing move is literally tearing his enemies apart. If these machines bled instead of leaking oil and transmission fluid, Bay would have been hard-pressed to avoid an R rating or two.) Heck, the robotic body count is so high — and the Decepticons so interchangeable when they’re transformed — that I didn’t realize I had witnessed the death of second-in-command Starscream until several minutes after the fact. And Bay is able to tease the execution of Bumblebee and make it seem possible that the life of the allegedly adorable Autobot — who inspired a tearful farewell from Sam not too long before — could actually be snuffed out. Of course, in Revenge of the Fallen Sam himself died and briefly went to Autobot heaven before being sent back to the land of the living, so it seems damn near anything is possible in these movies.

This is especially true in light of the expansive budgets Bay was given to realize them, ranging from the relatively frugal $150 million for the first film to an estimated $200 million for its follow-up. It’s a gamble that paid off handsomely for DreamWorks and Paramount as both films doubled their investments domestically and more than quadrupled them worldwide. It was with Dark of the Moon, however, that the overseas market demonstrated its pull by taking a film that experienced a marked drop-off in the States and still sending it soaring past the $1 billion threshold.

All the money in the world doesn’t mean a thing, though, if it’s marshaled in the service of telling asinine, plot-hole-ridden stories populated by ciphers masquerading as people we’re somehow supposed to care about. It’s saying something that the most complex character in the entire trilogy is Sentinel Prime, the rogue Autobot voiced by Leonard Nimoy, who lends some much-needed gravity to the one film he appears in. And even that is undercut by the Star Trek in-jokes needlessly tossed into the script, culminating in the groan-worthy moment where Sentinel pauses during the climactic battle to say, “The needs of the many outweigh the needs of the few.” Dark of the Moon is simultaneously Bay’s best-performing film and his worst. Funny how that works.

Craig J. Clark lives in Bloomington, Ind., and is more than meets the eye.

The Feminism of Ann-Margret’s Early Roles

Lynne Ramsay and the Horror of the Everyday