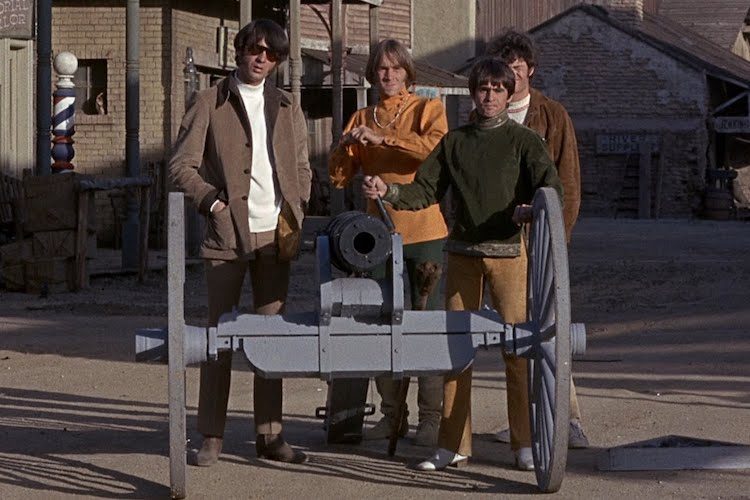 Fifty years ago, at the height of their popularity as television personalities and platinum-selling recording artists, The Monkees — Micky Dolenz, Davy Jones, Michael Nesmith, and Peter Tork — attempted to break free from the strictures of the personae that had been crafted for them over the two seasons their eponymous sitcom had been on the air. And what better vehicle could they ask for than a feature film that would show off all their talents — including their ability to play their instruments, previously documented in the first-season closer “Monkees on Tour” — both as a group and individually? Their accomplices in this venture: director Bob Rafelson (half of Raybert Productions and soon to be one-third of BBS Productions) and his co-producer and co-writer, Jack Nicholson (a journeyman actor one year away from his big break), who decided the myth of The Monkees needed to be exploded. At issue was whose careers would be left standing when the smoke cleared.

When I first stumbled onto Head in the mid-’90s, I was fresh out of college and a decade removed from the ’80s Monkees revival that had brought their show back into syndication and coaxed Dolenz and Tork into the studio to record three new songs for a greatest hits collection. I was in the habit of staying up late on Friday nights to watch TNT’s MonsterVision with host Joe Bob Briggs, and its chaser, 100% Weird. It was under the latter’s auspices that I learned of Head’s existence, and my curiosity about what a Monkees movie would entail overrode my desire to turn in at a decent hour. And a curiosity is how I would have described it at the time, its most salient feature being Nicholson’s screenplay credit, which seemed as much of a joke as anything that had preceded it. (In the pre-IMDb days, I had no idea he’d written several films before this, including two for Monte Hellman and Roger Corman’s The Trip, with which Head shares its psychedelic underpinnings and trippy philosophizing.)

If my first exposure to Head failed to make me a convert, its designation as a “weird” movie remained, such that when it was featured on TCM Underground a decade later, I was moved to revisit it on April Fools’ Day, an appropriate choice given its prankish nature. That the joke is on The Monkees themselves is baked into the film’s DNA, along with its circular structure, as the first song heard — Gerry Goffin and Carole King’s “Porpoise Song” — is reprised at the end. In between, Rafelson and Nicholson cycle through an array of genre parodies and piss-takes, which the band gamely participates in. But with its blunt antiwar messaging (incorporating — of all things for a G-rated movie — footage of the execution of Viet Cong officer Nguyễn Văn Lém during the Tet Offensive) and its fatalistic streak, Head is more Three Resurrected Drunkards (also from 1968, starring Japanese pop band the Tokyo Folk Crusaders and directed by Nagisa Oshima) than Good Times (Sonny and Cher’s sole big-screen outing, and director William Friedkin’s feature debut).

“Okay, you think they call us plastic now, babe, but you wait till I get through telling them how we do it, huh?” –Michael Nesmith

My interest in Head picked up steam when the Criterion Collection released it as part of the America Lost and Found: The BBS Story boxed set, placing it in the context of the “New Hollywood” filmmaking revolution it was obliquely responsible for ushering in. For evidence of this, look no further than the fourth-wall-shattering scene where Peter punches a verbally abusive lunch lady (immediately revealed to be played by a man in drag) and Rafelson calls cut, steps in from of the camera to consult with Nicholson, and downplays Tork’s concerns about how it will affect his image. “Bob, it’s a movie for kids,” he says. “They’re not going to dig it, man.” Meanwhile, Dennis Hopper passes through the frame, presumably trying to get a word in about Easy Rider, which was next on Raybert’s production slate. (As legend has it, Head got its title because if it was a massive hit, Rafelson and company wanted to bill their next film as being “from the people who gave you Head.” That could very well have been Easy Rider had Head not sunk like a stone after briefly topping the box office upon its release on Nov. 6, 1968.)

One of the most illuminating supplements on Criterion’s release is the commentary by all four Monkees (who were, alas, recorded separately). Among the lore brought up is the weekend they spent with Rafelson and Nicholson passing around a tape recorder (and very likely something else), brainstorming ideas for the movie. No mention is made of the protest where they refused to show up for the first day of shooting (save for Tork, who apparently didn’t get the memo), but as Nesmith says, “I don’t recall the four of us contributing that much,” so their failure to secure writing credits is understandable. “If there is a magic trick inside Head, I think it’s Jack Nicholson,” he says. Dolenz, meanwhile, states that he’d “like to know what in the world Jack was thinking when he wrote some of this stuff.” As to how the film marked the beginning of the end for the group (Tork was the first defection, buying out his contract at the end of the year), Jones is philosophical. “I think we said what we had to say and got out when we were supposed to.”

“You say we’re manufactured. To that we all agree. So make your choice and we’ll rejoice in never being free.” –Davy Jones

Of course, getting out is easier said than done for Jones’s fictional counterpart, who is the only one of the group to notice something is amiss when they tour a factory and wind up trapped inside a black box. Having spent the first half of Head parodying war films, Lawrence of Arabia, cavalry pictures, and boxing melodramas, The Monkees spend the second half repeatedly trying to break out of said box while parodying horror films, Westerns, prison movies, and silent cliffhangers before the whole shebang collapses in on itself. In the meantime, they shoehorn in a live performance of the Nesmith-penned “Circle Sky,” proto music videos for Tork’s “Can You Dig It?” and “Long Title: Do I Have to Do This All Over Again?” (one of the few Monkees songs on which he sings lead), a “Fool on the Hill”-style lyrical interlude set to the Carole King/Toni Stern ballad “As We Go Along,” and a performance of Harry Nilsson’s “Daddy’s Song” by Jones (who dances a duet with choreographer Toni Basil), which a passing Frank Zappa (credited as The Critic) dismisses as “pretty white.” “Well, so am I,” Jones replies. “What can I tell you?”

As much of a failure as Head was considered (“It’s too bad that it didn’t go anywhere,” Nesmith says on the commentary, “but I don’t know that it could have at the time”), it has gone on to achieve cult status. The same cannot be said for the thematically similar Good Times, an object lesson in how easily this kind of self-aware meta-movie can go south. Where Head sees The Monkees rebelling against the marketing gurus out to exploit them (represented by Timothy Carey’s Lord High ’n Low) and the godlike Big Victor (a larger-than-life Victor Mature), Good Times pits Sonny and Cher against Mephistophelean financier Mr. Mordicus (George Sanders), who says he wants to produce their first movie without telling them he plans on inserting them into a maudlin, hillbilly-themed rags-to-riches story. This inspires Sonny to fantasize his way through a series of genre parodies in which he’s a bumbling Western sheriff, a clumsy king of the jungle, and a jerky private eye, with Cher playing a role in each, leaving room in between for several incongruous musical numbers. While Sonny and Cher’s love triumphs over Mordicus’ machinations, though, there is no such escape for The Monkees, whose closed-loop narrative deposits them right back where they started. A downbeat conclusion, to be sure, but definitely more realistic (however surreal its trappings may be). And hey, at least they’re able to look back on their sole cinematic venture without embarrassment.