What does it mean to be a black man in America? If we believe the media, it means you’re a target or some kind of miscreant. In part because of the tone set by the current Administration, these stereotypes are promoted as truth and used as justification for the mistreatment of black men by racists, the police, and the criminal justice system.

Still, the reality is far from that, and we in the black community don’t see our men that way.

In 1964, a white German filmmaker named Michael Roemer wrote and directed Nothing But a Man, which addressed the issues faced by black men in America. The violent racism of some American police and the equally virulent racism of certain members of the clergy hasn’t changed much in more than 50 years. The film remains timely.

It stars Ivan Dixon as Duff, a black man who struggles to make a life for himself in a segregated Southern town. He is an outsider, and his name is symbolic: it’s Gaelic and means “dark.”

Also symbolically, the film is shot in black and white. The stunning opening shot pans across a railroad construction crew composed entirely of black men. As they work, the camera zooms in on their boss—a white man. He sits on a railroad car and supervises. The camera moves to show the distance over which these men have laid tracks.  Clearly, their work affects the lives of the people who use the railroad, regardless of their race. Yet, as we learn, these men are not allowed to move freely in the towns that they connect.

The shot is also significant because it demonstrates the importance of teamwork. The men have developed a kind of intuitive synchronicity that enables them to work safely and productively in unison. Teamwork, or a sense of community, is an important theme in the film. 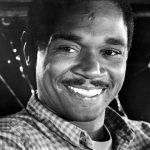 Dixon was a respected, theatrically trained actor, producer, and director who gives Duff a seething tension. Initially, he embodies two kinds of black men. The first ignores the necessity of a support system, confronting systemic racism alone, and the film outlines the consequences of this behavior. The second is the kind of black man who comes from a world where his manhood and personhood are not questioned.

When the film was made, both Malcolm X and Martin Luther King Jr. were still alive and putting Civil Rights at the top of the nation’s agenda. Like those men, Duff is articulate and works to change the status quo, even trying to organize his new co-workers into a union. He doesn’t seek violence. However, like Malcolm X, he is capable of defending himself physically if that is called for.

Then, too, Duff is more than both men. He doesn’t come from a religious background. He doesn’t justify his rights using the language of religion. In fact, he confronts the clergy (represented by his father-in-law) because they have acquiesced to segregation.

Here we have what Malcom X might call the field slave versus house slave syndrome. The father-in-law is comfortable financially and has accommodated himself to Jim Crow. He lives in a pretty house on a quiet street. He denounces Duff because he feels that his own position in the community has been jeopardized by Duff’s militancy. As the father-in-law strides around the room demanding that his son-in-law submit to white racism, Duff sits calmly asserting his moral rectitude in not doing so.

The father-in-law also symbolizes the professional class in the black community. Much like the European aristocracy during Napoleon’s invasion, they enjoy the privileges and education that money brings. These benefits separate them from the horrors of segregation that their poorer brothers and sisters endure. The haves of the black community gain as much from systemic racism as the dominant race.

Robert M. Young’s cinematography makes a vivid comparison between the plantation-like atmosphere in the shantytown that the have-nots live in. There are no sidewalks. The houses are dilapidated, and the streets are dirty.

Like the reality shows of today, Young’s camera work is compelling and immediate. Much of the film is shot in close-ups, creating a feeling of intimacy. All of these combine to make Nothing But a Man present and realistic. Equally powerful, the issues it tackles — classism and racism — are of the moment, exacerbated by the Trump Administration. The film, like its lead character, shows the way to address these problems: to hold one’s personhood as inviolate.