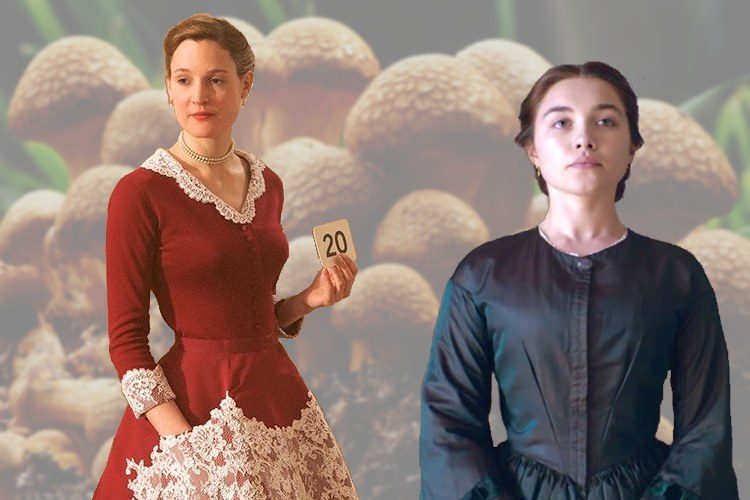 And yet, the movie doesn’t follow the trajectory of most Gothic romances, which usually conclude in mortal tragedy. This is due to the rebellious nature of Alma, who upends all of our expectations. She is not willing to sacrifice herself in the name of love, not even on behalf of Reynolds’ particular obsessive brilliance. In fact, she proves just as obsessive as he is, but unlike him, she is not satisfied living within obsession’s gloomy shadow. She goes to great lengths to get out from under it, and to bring Reynolds up with her.

In the end, the film is about, if not women’s empowerment, at least one woman’s ability to level the balance of power in her own life. Although Alma plays the long game in her romantic war of attrition with Reynolds, the film establishes her stubborn independent streak early on. When Reynolds teasingly accuses her of having tastes that might get her into trouble, she responds, “Perhaps I’m looking for trouble.”

Surprisingly, rather than sending Reynolds retreating to his established ways, her fiery refusal to bend to him becomes the catalyst for him to change. It is when things are seemingly at their breaking point (as following a disastrous surprise dinner Alma cooks for an annoyed Reynolds, or when she ditches him on New Year’s Eve to go out dancing) that he makes the express choice to recommit himself to their relationship.

For her efforts, Alma even wins over Reynolds’ taciturn, Svengali-like sister, Cyril (Lesley Manville). Cyril, who stalks the House of Woodcock quietly, draped in all black like the Angel of Death, attending to its business both financial and domestic, surprises her brother by expressing her admiration and approval for Alma (albeit in her singularly cold, even capricious manner).

Of all the surprises within Phantom Thread, this is one of the largest, and most welcome, considering how we as an audience are conditioned to expect the worst from characters such as Cyril, whose most obvious forebear is Mrs. Danvers, the obsessive and manipulative lesbian housekeeper in Alfred Hitchcock’s 1940 romantic thriller Rebecca. For as unsentimental as it is, the moment Cyril vocalizes her support for Alma is the moment we recognize that the balance of power within the House of Woodcock has shifted. Alma has gained the upper hand, and the remainder of the film revolves around her holding on to it.

By the end of the film, Alma and Reynolds’ relationship has morphed from one of literal toxic codependency to a kind of proto-S&M partnership, a cycle of binging and purging that is at least leavened by a recognition and acceptance of what it is they want from one another. The end is a twisted one, but something approaching happy.

Phantom Thread was not the only Gothic romance of 2017 to portray an iron-willed woman manipulating a repressive system in order to overturn it. Set roughly a century earlier, in the muddy and gray marshland of the English countryside, Lady Macbeth (directed by newcomer William Oldroyd, and adapted by playwright Alice Birch from Nikolai Leskov’s 1865 Russian novella Lady Macbeth of the Mtsensk District) examines the more overtly violent rebellion of a young woman who, like Alma, refuses to subordinate herself to the will of others.

Young Katherine (Florence Pugh) has been married off to the significantly older Alexander Lester, the heir to his family’s estate and mining operation. Although she’s married to Alexander (who shows absolutely no interest in her on any level, including physical), she serves at the behest of his cruel, garish father Boris, who makes plain early on that her sole purpose is to attend to the expected ceremonies of social housekeeping, and give him a grandson.

The limited nature of her duties don’t seem to bother Katherine so much as those placed upon her physicality. Kept on a strict sleep schedule and confined to the manor, she begins to act out, first in small ways — looks that openly betray her contempt for everyone around her, insolent backtalk, stolen drinks of wine. This rebellion soon enough moves into the realm of the carnal.

When her husband and father-in-law are called away on business, she takes to the out-of-doors, where she is seduced by a rough-edged stable worker, Sebastian (Cosmo Jarvis). The two embark upon a ravenous affair, one that produces plenty of let-down hair, ripped bodices, and soaring proclamations of love.

While this may follow the expected route of the pastoral romantic tragedy (Leskov’s original novella is often compared to Madame Bovary and Anna Karenina), what’s striking is the openness with which Katherine and Sebastian carry on their rebellious affair, their loud and violent lovemaking echoing throughout the quiet manor with zero regard for who might hear them. When their affair is eventually discovered by a newly returned and viciously infuriated Boris, Katherine takes immediate and drastic action to hold on to her newfound love and sense of freedom.

Considering that the title is a direct reference to one of the most famous murderesses in all of literature (none of the characters within the film are actually named Macbeth), it should come as no surprise that said actions are of the homicidal variety. Katherine’s first weapon of choice is the same as Alma’s (though her intentions are far more lethal): she slips poisonous mushrooms into her unsuspecting victim’s breakfast.

(It bears noting that there was yet one more film to have come out last year that also featured women poisoning men with mushrooms: Sofia Coppola’s update of The Beguiled. That film – itself awash in Gothic sensibilities, albeit of the American Southern flavor – likewise examined the upending of traditional power dynamics between men and women by way of the violent expression of long-repressed sexual desire. Placing it alongside Phantom Thread and Lady Macbeth would make for a enjoyably heady and sensuous, if perhaps a bit too dizzying, triple feature.)

Her extreme measures having proven successful, Katherine, like Alma, returns to them when her independence and livelihood are again made vulnerable. At the end of the film, she, like Alma, succeeds in permanently shifting the balance of power in her favor, although her victory is a decidedly darker one, with a trail of bodies in her wake.

If Katherine is, as her distraught lover claims during the culmination of her killing spree, “diseased,” she is set to pass the disease on to her unborn child. But what, exactly, is the nature of her disease? Is it evil? Malice? Death? Or is the “disease” simply a drive toward freedom?

While on the surface Katherine’s might seem like a pyrrhic victory, it’s actually far more complicated. Yes, the ultimate shape of her triumph is cruel, but it’s hardly any crueler than the previous status quo. Innocents have died, but it wasn’t as if the system had shown any concern for innocents beforehand. The struggle for freedom is a messy one, but as any good lady of the manor will be quick to note, you can’t make a good breakfast without breaking a few eggs.

Katherine’s is a transgressive arc, and the thrill we get from watching it is the same we get from watching the bad, brooding men of “prestige” film and television — from The Godfather to Mad Men to Breaking Bad. You can point to those stories as ultimately condemning their antiheroes for their moral failings and violent atrocities, but let’s not pretend that their appeal doesn’t lie in the way they serve as expressions for our own dark desires. At least in Katherine’s case, her desires — for freedom, love, sex, power, and vegeance — come from her having previously been denied them. She was first a slave to the system which she ultimately topples.

Lady Macbeth, for all of its noirish fatalism, doesn’t adhere to the standard expectations of romantic tragedy, any more than Phantom Thread does in all its melancholy and moroseness. Both films use the example of the objectified and repressed woman — the beautiful porcelain doll who is expected to wear fancy dresses and do as her male lord commands — to explore a shared cunning which, in the end, for however devious and criminal, is preferable to the sense of order which sought to contain it.