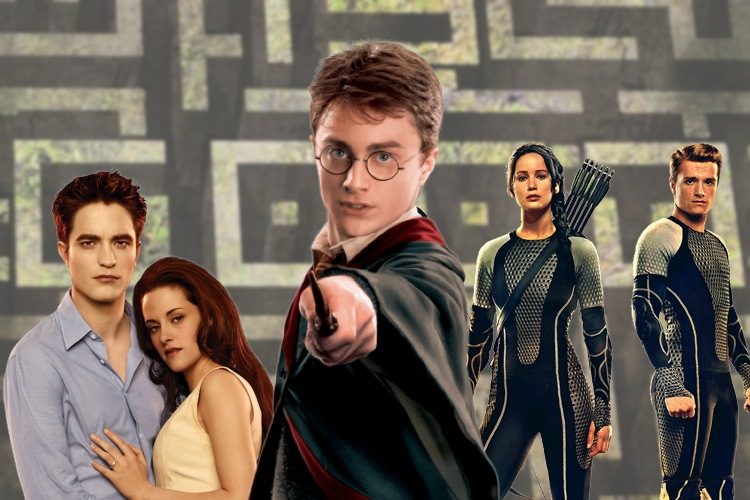 Where were you when the world stopped giving a damn about big-screen Young Adult (YA) franchise adventures? You most likely don’t recall, but that’s fitting for a sub-genre that burned ridiculously bright at the box office for 15 years before fading away with barely a whimper in 2016. To clarify, it’s specifically adaptations in the crosshairs here, meaning we’re only discussing film franchises spawned from bestselling YA book series. That’s no small gathering, though, as new titles appear on bookshelves every day with Hollywood option announcements typically following suit, but while the shelves are still full the multiplexes have grown oddly quiet. What happened, and what does it mean  for the new Maze Runner: The Death Cure and future YA franchises?

The sub-genre was dominated throughout its 2001-2015 run by the holy trinity of Harry Potter, Twilight, and The Hunger Games — the top 17 highest-grossing YA adventures all belong to those three franchises. The eight Harry Potter films, five Twilight films, and four Hunger Games movies earned a total of $14 billion worldwide.

Curiously, the next two spots on the chart belong to the very franchise that seemed to confirm the sub-genre’s demise.

Divergent (2014) and its follow-up, Insurgent (2015), earned nearly $600m worldwide, and while that’s respectable coin — especially for movies that are little more than rallying cries in support of multitasking — their budgets didn’t leave much wiggle room for subsequent drop-offs. Which is precisely what happened with the series’ third film, Allegiant (2016). It opened in the same March slot as the previous films, but it limped along to a $66m domestic total and a worldwide gross that ended more than $100m below its immediate predecessor. More than a third of its audience disappeared over the course of one year, never to be seen again.

It’s easy to blame the Divergent series itself, as the films are all hot garbage that distilled the long familiar themes and ideas of “the One hero” to the point of mockery. (Forget the power of legend, myth, or the unique nature of those who stand up against dystopian tyranny — the Divergent films are literally about a teenager who can do two things at once.) The third film’s lackluster performance hit so hard that the fourth entry may actually be premiering on television.

While Allegiant was 2016’s highest profile YA misfire, it wasn’t alone. Two other franchise hopefuls tried to get off the ground with one dying on release and the other doing just well enough to leave the sequel door open a crack. First out of the gate was The 5th Wave, but even with a modest budget (roughly $57m including marketing) its $110m worldwide gross and overall lack of enthusiasm means the next two books in the trilogy won’t be seeing the big screen. Tim Burton’s stab at the sub-genre, Miss Peregrine’s Home for Peculiar Children, fared better, earning nearly $300m around the globe, but that’s still not quite double its budget and doesn’t bode well for the possible follow-up, Hollow City.

The odds suggest it’s something of a sucker’s market. Outside of the big three, only The Chronicles of Narnia: The Lion, the Witch, and the Wardrobe (2005), Percy Jackson and the Olympians: The Lightning Thief (2010) and The Maze Runner (2014) managed to survive beyond the first film adaptation. We only got three of seven Chronicles films, and Percy Jackson squeezed out a single sequel — honest, there was a sequel called Sea of Monsters in 2013 — despite there being five books in the series. Only The Maze Runner will actually complete its story as the three-book series comes to an end with The Death Cure.

There wasn’t a single YA adventure adaptation released in 2017 — this after years of multiple titles per year — so The Death Cure’s performance should be a good indicator of the sub-genre’s ongoing viability through 2018 and beyond. Only two more are scheduled for this year, and of those I’d wager you’ve only heard of the first. A Wrinkle In Time hits theaters in March, and if the massive investment of talent and money proves worthwhile, there are four more books in Madeleine L’Engle’s quintet waiting in the wings. Also hitting screens this year, albeit with far less star power and marketing reach, is The Darkest Minds. That series has four books, but if I were a betting man I’d wager the odds are slim we’ll get to see the second reach theaters.

Hell, I’m not even convinced the audience will show up for A Wrinkle In Time.

That 15-year stretch dominated by Harry Potter, Twilight, and The Hunger Games was carried by those three franchises. No others even came close despite numerous attempts, and like the studios themselves, we’re left wondering why none of them caught on with the public. Are the first entries in the big three simply better films? That’s part of it, as several of the “one and done” titles mentioned above sit below 50% on Rotten Tomatoes, but even Twilight capped out at 49%. The original book series’ popularity seems equally unclear on the subject as some of them (The Mortal Instruments, Eragon) have sold over 30 million copies compared to The Hunger Games‘ 60 million, but those sales were accomplished without multiple movies bolstering additional interest. For additional reference, the Divergent book series has only sold 20 million copies.

The answer is ultimately as ethereal as it is with any film’s success. Some films connect with an audience, and some don’t. Teens and preteens are every bit as fickle as adults, and while talent, quality, timing, and marketing all play a role, none of it breaks down into an easily predictable formula. If it did, you’d be watching the 29th film in my epic adventure series about a mute (by choice) teenage girl, her talking armadillo, and their ongoing quest to rid the world of irradiated mimes.

Is the YA adventure sub-genre dead? No movie trends ever truly die, and even when they fade in popularity — like the Western did heading into the 70s — there are always exceptions to the rule. (We still get Westerns each year, but they’re few and far between and rarely light up the box office.) If 2018’s three hopeful YA franchise starters fail then the foreseeable future seems dim, but Hollywood is nothing if not persistent, especially when there’s the promise of the next Harry Potter cash cow on the horizon.

Rob Hunter lives in California, is neither young nor adult.