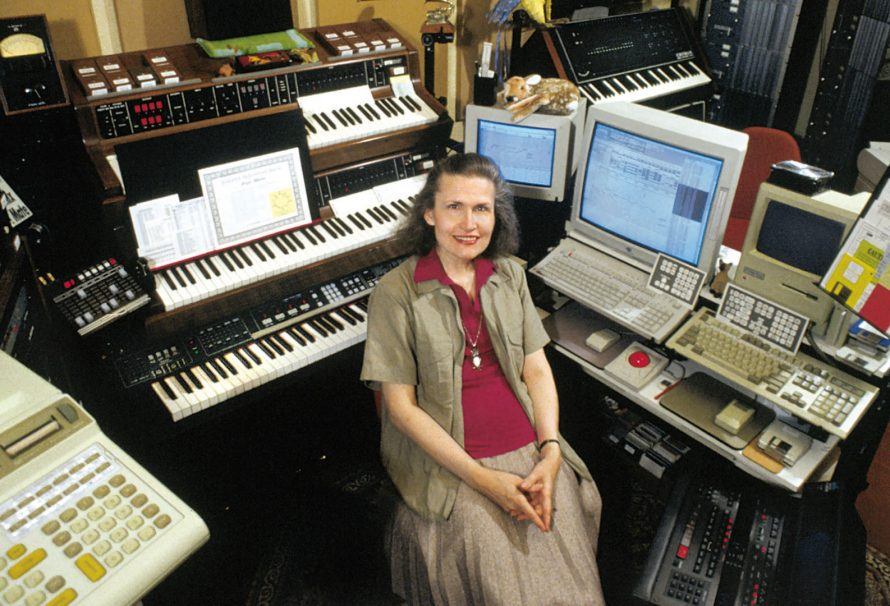 Before Daft Punk, before Tangerine Dream, even before John Carpenter, there was Wendy Carlos. Not content with hurling classical music into the future with her 1968 record Switched-On Bach, she then paired up with master filmmaker Stanley Kubrick on A Clockwork Orange and later The Shining. But in between those, she explored the unknown space between the orchestra and the synthesizer, on the canvas of a multi-million dollar Disney picture. The result was Tron.

Boasting a $17 million budget and Jeff Bridges as main character Kevin Flynn, Tron (1982) was writer-director Steven Lisberger’s attempt to bring the new aesthetic of video games into the world of cinema, with games such as Pong (1972), Space Invaders (1978), and Donkey Kong (1981) filling arcades and subsequently corporations’ coffers. Lisberger’s pitch was essentially The Wizard of Oz for the arcade generation, with computer-generated imagery the new Technicolor, so he would need music that would not only fit with the visuals but also the film’s unique sound effects. Enter Carlos, who saw potential in the picture’s mesmerizing graphic style, a cross between German Expressionism and Pac-Man.

“It became clear to me,” she told Keyboard Magazine in 1982, “that the part of the score for the computer world should be as full of color as possible. I wanted to use a combination of symphony orchestra and synthesizer for the computer world, and just a string orchestra for the real world. I felt that symphony orchestra in combination with synthesizer could be a strong factor in the film, a natural idea that complemented the way the film combined live actors and video graphics.” Carlos, who had studied composition at Columbia University, saw this as a chance to stretch her muscles in writing for orchestra, so had the London Philharmonic Orchestra record symphonic elements to augment the electronic pieces.

This was where she ran into trouble, as many do with effects-heavy pictures. The LPO was booked for late March ’82 and the edited film was not delivered until February, leaving very little time for Carlos to write to the final cut and perform the synth tracks. In the end, the decision was made to record the orchestra first and the synthesizers later, so it could be ready for the sound mix and, finally, the film’s release on July 9.

Further problems arose while recording the orchestra, with Carlos and the engineers disagreeing on microphone placement, as well as a lack of rehearsal time, with the LPO afforded a measly two days in which to record fifty-five minutes of music. Subsequently, the sessions were not completely suitable for the composer, and she had to fix several things due to orchestra flubs and miking mistakes. “I used the synthesizer in three ways. First, I added tracks where synthesizer colours were needed. Second, I doubled lines that I thought were performed poorly. Third, I put in lines that had been missed altogether by the orchestra, totally off-mike, or improperly recorded.”

Because Carlos was working on the soundtrack album tapes, she wasn’t available during the film’s final mixing sessions to represent the score, which was then mixed lower than the sound effects. To add insult to injury, part of her end credit suite was replaced by a song by soft rock outfit Journey. Nevertheless, Carlos wrote a spectacular score for Tron, which perhaps has to be heard away from the film to be fully appreciated.

However, her music supports the picture’s fascinating visuals perfectly. The central “anthem” theme is a wonderfully bright piece that manages to emotionally transcend the film’s shortcomings, with a beautiful mix of electronics, orchestra, and choir coming together in a perfect synthesis of the esoteric elements that make up the picture’s computer world. The scene where the characters find water is a shining example of how Carlos gives her music a beautiful tone, as you might expect, but infuses it with an otherworldly color that sets it apart from how a straight orchestral score might play with the scene.

Carlos’ pioneering would have a huge influence on film music, and it continues to this day. Another celebrated composer, Jerry Goldsmith, had similarly spent years experimenting with synthesizers, but throughout the 1980s would use them much more prominently in tandem with the orchestra on such scores as Gremlins (1984) and Rambo: First Blood Part II (1984), while John Carpenter, famed for performing his scores on synth, would eventually add an orchestra for Village of the Damned (1995) and Escape From L.A. (1996), the latter in association with Shirley Walker. And of course, French duo Daft Punk would use the same technique for their score to the 2010 sequel Tron: Legacy.

Thankfully, Wendy Carlos’ reputation continues to grow, especially with the recognition women are finally receiving for their work in the arts, with the composer profiled in the recent documentary Sisters With Transistors (2021). Her work on Tron was one of many breakthroughs where she succeeded creatively, against odds – and as a result, perhaps made the strongest contribution to one of the weirdest mainstream pictures of the 1980s. End of line.

“Tron” is now streaming on Disney+. “Sisters With Transistors” is currently playing in virtual cinemas.

A Loner, A Rebel: A Profile of Pee-wee’s Big Adventure

Review: The Eyes of Tammy Faye

The Dark Gift of Interview with the Vampire

The Elvis Before Elvis