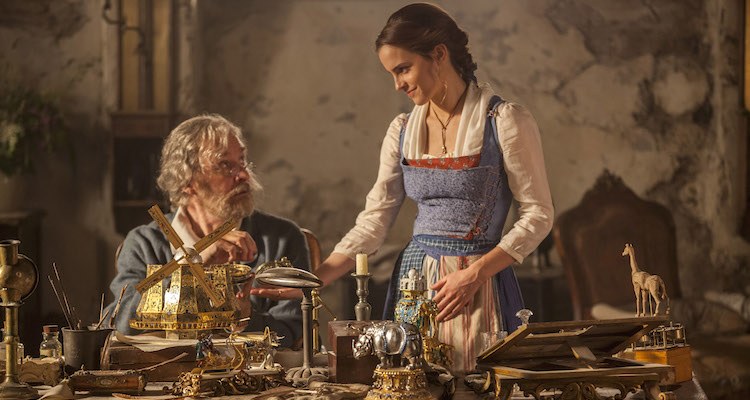 The only way Disney’s live-action remake of its own Beauty and the Beast works is if you don’t compare it to the 1991 animated masterpiece. This is hard to do, though, because 1) you have seen the 1991 animated masterpiece, possibly many times, and 2) the remake keeps chasing it, going so far as to duplicate specific shots and sight gags in an effort to trigger fond memories. Those memories are indeed fond, but the new film pales in comparison to them. It never passes the “So why am I watching this version?” test.

It’s only a remake of the 1991 cartoon, by the way, with those seven songs — “Be Our Guest,” “Gaston,” etc. — and none of the ones that were added when the film was turned into a Broadway musical. (It doesn’t even use the “Human Again” sequence from the film’s 2002 re-release.) Instead, it has a few uninspired new songs written by Alan Menken and Tim Rice just for the movie (and thus potential Best Song Academy Award consideration). Directed by Bill Condon (Dreamgirls) from a screenplay by Stephen Chbosky (The Perks of Being a Wallflower) and Disney stalwart Evan Spiliotopoulos (Pooh’s Heffalump Movie), it’s 129 minutes long and has about the same amount of singing as the 85-minute original did. You know what that means: more talking!

The plot is essentially unchanged save for minor variations and some expanded backstories. Belle (Emma Watson), the only headstrong, literate girl in her provincial French village, becomes prisoner to a buffalo-like Beast (Dan Stevens), actually a handsome prince who was cursed with beastliness as punishment for his selfishness. He dwells in an enchanted castle with his servants, who were transformed into housewares due to guilt by association, I guess. These include Lumiere the candlestick (Ewan McGregor), Cogsworth the clock (Ian McKellen), and Mrs. Potts the teapot (Emma Thompson), plus a narcoleptic, opera-singing wardrobe (Audra McDonald) and her harpsichord husband (Stanley Tucci). If the Beast doesn’t get someone to fall in love with him before the last petal on the arbitrary magic rose arbitrarily falls, he and his employees (slaves?) will be stuck like this forever.

Meanwhile, an over-compensating violence enthusiast named Gaston (Luke Evans) wants to marry Belle whether she likes it or not (she does not). Assisted by his faithful, pear-shaped sidekick LeFou (Josh Gad) — whose romantic crush on Gaston is more obvious than before but still unspoken — Gaston uses Belle’s dotty father, Maurice (Kevin Kline), as leverage. Maurice is a vaguely defined artist or tinkerer now instead of an inventor, and there’s a lengthy tangent giving unnecessary details about his late wife, Belle’s mother. On the other hand, new information about the Beast’s pre-Beast life effectively fleshes out his role in the story, and it’s good to finally have an explanation for, among other things, why the villagers never noticed the giant Beast castle a few miles away.

The enchanted objects, including much of the Beast, are mostly CGI creations — animated, in other words — but Condon and company chose to make everything adhere to the laws of physics that would apply to real objects. They sing and dance, but they only bend and stretch in natural ways. And so the film has this manufactured, weighed-down feeling to it, a magical story hampered by gravity and reality: it turns out talking candlesticks aren’t as wonderful without that rubbery, cartoonish energy. The songs often have repetitive, vamping measures added between lyrics to accommodate the blocking (not an issue in a cartoon, where characters can move from one side of the room to the other instantaneously). Some visual jokes fizzle for similar reasons. For example, when the Beast is encouraged to flash a smile, the result isn’t a hilariously exaggerated grin but a mild one, confined by the limits of what a real Beast’s mouth and teeth can do.

That being said, the cast is almost uniformly excellent. If there’s any element of this remake that surpasses the original, it would be found among the performances. Emma Watson and Dan Stevens have chemistry together even under the makeup and CGI, and it’s nice to see (and hear a bit of singing from) Kevin Kline as crazy old Maurice. Luke Evans makes a fine preening Gaston, though Josh Gad’s campy LeFou veers wildly between funny and irritating, saddled with anachronistic dialogue like “I used to be on Gaston’s side, but we are so not in a good place right now.” And if someone had to replace Angela Lansbury as the kindly, title-song-singing Mrs. Potts, you couldn’t do better than Emma Thompson.

But the whole thing is just so labored, so effortful. It does what it tries to do, technically, but you feel all the work. Most of its charms are borrowed; rarely does it create charm of its own. As delightful as it sounds (and often is) to have, say, Ewan McGregor and Ian McKellen play Lumiere and Cogsworth, in the end it’s like everything else about the movie: not as enchanting as you want it to be.

REVIEW: Ocean’s Eight Is More Efficient, Not Quite As Much Fun

REVIEW: Uncle Drew Has NBA Stars Clowning Around, Nothing Else

REVIEW: Boiled Angels: The Trial of Mike Diana Guilty of Being an Entertaining Doc (Fantasia Festival)

Mission: Accountable — The Facts & Figures of Ethan Hunt and the IMF