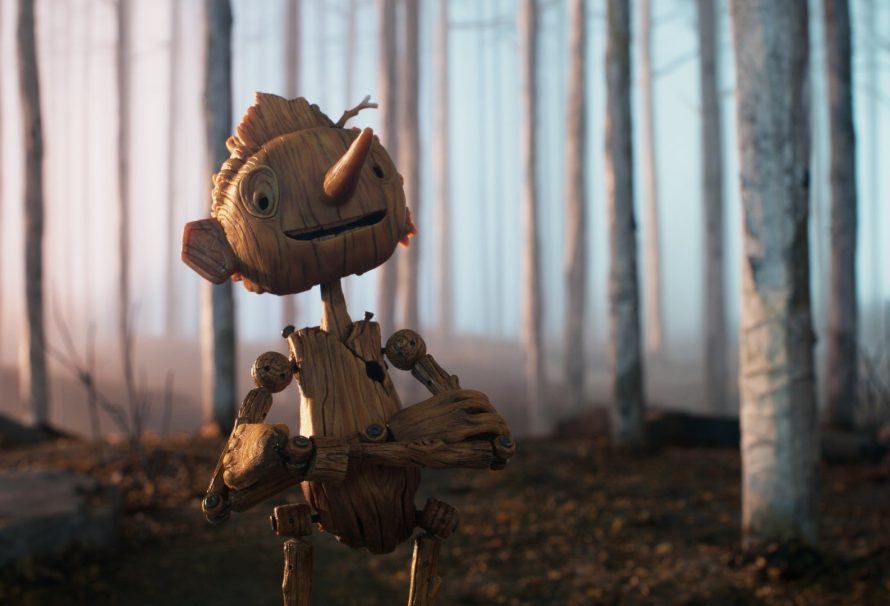 The latest adaptation of Carlo Collodi’s children’s classic is officially titled Guillermo del Toro’s Pinocchio. Perhaps the director’s possessive was added to distinguish this stop-motion animated film from the literal dozens of other versions of Pinocchio — it’s the third one released in 2022 alone — but it also serves as a stamp from its creator. del Toro isn’t just co-director here, alongside animation veteran Mark Gustafson (The Fantastic Mr. Fox). He’s also a co-writer with Adventure Time’s Patrick McHale, a producer, and a lyricist of the stop-motion musical’s songs. This Netflix movie is such a wildly original take on the story that it could have come from no other filmmaker than the man who made Pan’s Labyrinth, The Devil’s Backbone, and The Shape of Water; it’s a fantasy set against the backdrop of a real-world horror, a nightmare and bedtime story rolled into one.

Though Pinocchio is set in Fascist Italy to The Devil’s Backbone’s Civil War-era Spain, Pinocchio begins almost identically to del Toro’s 2001 movie: we see bombs dropping from planes flying above, and a child dies in both film’s early scenes. In Pinocchio, the death of young Carlo (a character added to this version of Carlo Collodi’s story) sends his woodcarver father, Geppetto (voiced by David Bradley), into a bottle. In a drunken rage, Geppetto chops down a pine tree at his son’s grave, unknowingly jostling Sebastian J. Cricket (Ewan McGregor), an insect and aspiring writer who has made his home in its trunk. Fuelled by grief, Geppetto carves the wood into a marionette that looks like a boy and promptly passes out. A wood sprite (Tilda Swinton) brings the puppet to life, much to the surprise of a hungover Geppetto when he meets Pinocchio (Gregory Mann) the next morning.

Some elements from Disney’s beloved 1940 animated film remain: a cricket serving as Pinocchio’s conscience, a puppet show with Pinocchio as its star, a wooden nose that grows with each lie, and a giant sea creature who swallows these characters whole into its cavernous belly. Yet Pinocchio is another beast entirely, and not just because del Toro has swapped out Geppetto’s cat Figaro and fish Cleo for a mischievous monkey named Spazzatura (Italian for “garbage,” and whose grunts and squeaks are voiced by two-time Oscar winner Cate Blanchett). In spirit, del Toro’s movie bears more resemblance to its stop-motion brethren like The Nightmare Before Christmas and Laika’s Coraline and ParaNorman than a Disney film or even what we expect of a Pinocchio adaptation. This is dark and strange stuff; it doesn’t file down the sharper edges of the source material, and it even adds a few of its own. The cruel words said from some on-screen parents to their children may be just as frightening to young viewers as some of the PG-rated violence.

Pinocchio is also surprisingly frank about death for a kids movie, with a bittersweet ending that feels fresh for the genre. In addition to the transformative power of love, the film centers on the preciousness of life — with the acknowledgment that it wouldn’t matter as much if death weren’t an inevitability. Despite beginning with the tragedy of a child’s death, it doesn’t treat dying as a purely bad thing, so much as it is simply a part of existence.

Where Pinocchio is less successful thematically is in its setting in 1930s Italy, which doesn’t feel as organic as the political and historical elements in Pan’s Labyrinth and The Devil’s Backbone. Fascism and its insistence on obedience are (rightfully) decried, but Pinocchio is a disobedient brat for most of the movie, endangering the lives of himself and his father and hurting Geppetto’s feelings. This dissonance undercuts the emotional power of the film, which also isn’t helped by the short and simplistic songs peppered throughout its overlong running time. Composer Alexandre Desplat’s music is typically gorgeous (as are vocals, especially from McGregor and young Mann), but the accompanying lyrics don’t display a  level of artistry and care that matches  the rest of the movie’s craft.

The visuals and the weird world created by del Toro and co. are the film’s undeniable strengths. With its pedigree, you expect creative creature design and grotesquerie — and you get it. Each scene is rich with detail and texture, with a tactile quality that is difficult to replicate with more standard kinds of animation. It’s a gorgeous thing to watch, even when it’s gross. Given that it’s coming from the mind of del Toro, you know it’s going to be both (and often in equal measure).

Somehow del Toro has taken this familiar story and made it something new, both in how it looks and in its approach to the plot. This doesn’t feel like a tale that’s been told across multiple mediums for over a century. Even with echoes of past adaptations, the director still has created a work of startling originality.

“Guillermo del Toro’s Pinocchio” is out now in limited release. It streams Friday on Netflix.

Sleepy Hollow and the Rise of Gothic Noir