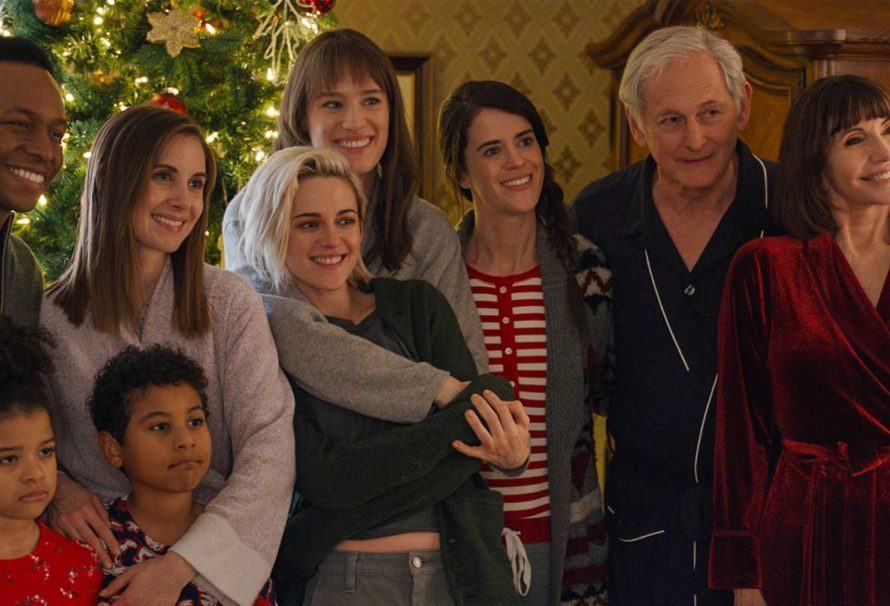 Christmas-set romantic comedies typically adhere to a pretty strict formula, one you can see displayed from Hallmark to Lifetime to Netflix to studio releases. There’s family, a culture clash of some kind, dramatic misunderstandings, a requisite amount of coffee/cocoa/eggnog, and some form of high-profile disaster involving the holiday itself. Clea DuVall’s Happiest Season, out this week on Hulu, fits this profile to a candy cane-striped, tinsel-draped tee; the main difference is that the central couple is gay. While that provides some timely and moving thematic opportunities, Happiest Season also brings up questions about what we actually want from a holiday movie, particularly one with inclusive leanings.

Abby (Kristen Stewart) is happily in love with her girlfriend Harper (Mackenzie Davis), and planning to propose. Harper takes Abby home with her to meet her family, but on the way discloses a major issue: she hasn’t told her parents she’s gay. Harper’s dad, Ted (Victor Garber) is currently in the middle of a mayoral campaign, and her mom Tipper (Mary Steenburgen) is obsessed with keeping up appearances for the sake of good press. Over the holiday, Abby and Harper’s relationship has to be forced back into the closet, with Abby posing as Harper’s sad orphaned roommate.

Complications ensue, of course, when Harper’s competitive, high-maintenance sister Sloane (Alison Brie) and her picture-perfect family show up and immediately suspect something’s up between her and Abby. Harper’s high school ex Riley (Aubrey Plaza) also thinks there’s more to Harper and Abby’s connection than they’re telling, and becomes an ally. Abby’s best friend John (Dan Levy) also provides Abby with emotional support as she starts to worry if Harper’s refusal to come out means their relationship is doomed.

Happiest Season features some fun supporting performances (Levy and Mary Holland as Harper’s odd duck sister Jane are particular standouts), and the pairing of Stewart and Davis as the central couple feels like an inspired choice. Stewart in particular is a little outside of her usual wheelhouse in a lighter comic role that results in a game performance, even if it doesn’t always work. If anything, it might make more sense for her and Davis’ roles to be reversed, with Stewart playing the more reserved Harper and Davis getting to exude likeable awkwardness as Abby.

The film is hindered, however, by a Hallmark-y squeaky clean sense that makes it feel toothless. There are some legitimately touching moments related to identity, community, and coming out, but those moments are surrounded by schmaltz that threatens to make the whole enterprise feel like unimportant fluff. DuVall’s film could have some actual edge if it wanted to, but instead suffers from a cliche plot, uninspiring aesthetics, and a tooth achingly-sweet soundtrack of bad Christmas pop.

Happiest Season feels like a slightly nicer version of a basic cable Christmas movie, which dims its effect somewhat. However, everybody deserves to have a cheesy holiday romantic comedy that reflects their experience, and DuVall’s movie certainly does a solid job of exploring the difficulties and joys of LGBTQ relationships. If nothing else, it’s nice to have a mildly entertaining Christmas movie that injects some diversity into the genre, even if it’s not especially profound.

Review: John and the Hole