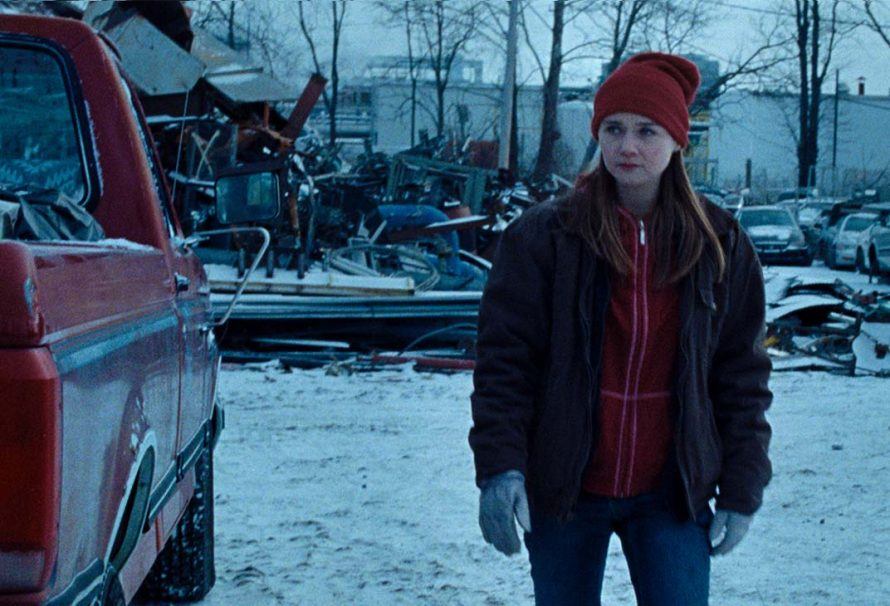 Nicole Riegel’s Holler belongs to a growing wave of stories that tackle the experience of rural poverty, and the many ways our country continues to fail the working class. It’s an especially successful area in nonfiction literature–an early version being Jeannette Walls’ memoir The Glass Castle (adapted in 2017), and a particularly bad example being J.D. Vance’s Hillbilly Elegy, which Ron Howard turned into an even more egregious adaptation last year.

Riegel’s movie, set in the rust belt, isn’t pandering or syrupy. There’s no moralizing about bootstrapping, or harshly judging people who have been dealt an undeniably bad hand by forces outside their control. It is, however, disappointingly meandering and formless. Riegel’s story about a teenager trying to make it out of her dying Ohio town lacks direction, and sometimes feels as uncertain as its heroine about what its goals are.

Ruth (Jessica Barden) is a high school senior whose brother Blaze (Gus Halper) has taken care of her ever since their mom Rhonda (Pamela Adlon) went into a recovery program for her opioid addiction. Ruth and Blaze try to make ends meet by selling aluminum cans and scrap to a local junkyard owner, Hark (Austin Amelio). Unfortunately, it’s not enough to keep the water on, or the eviction notices from piling up. When Ruth gets accepted to college, Blaze convinces her to go with him to join Hark’s scrap metal crew, which offers a significantly better payday, and could help Ruth pay for an engineering degree. Along with the bigger haul, however, comes danger from on-the-job risks, rival scrappers and Hark himself.

Barden is the movie’s greatest strength, putting forward a strikingly natural performance that tells us the kind of person Ruth is without other characters, or even much dialogue, having to. She’s a capable, stubborn kid who knows she’s smart, but lacks the resources to know what to do with her intelligence. Barden communicates that understanding mostly through her facial expressions, displaying the impressive emotional intelligence that’s followed her throughout her career so far. She’s backed up by a number of other strong performances, notably Becky Ann Baker as Linda, a factory worker and family friend.

The movie surrounding those performances, unfortunately, doesn’t provide a compelling narrative, or commanding visuals to keep our attention. There isn’t an arc in Holler so much as a timeline of events, occurring in drab, wintry grays and blues, that eventually cause consequences. Hark’s scrap crew lives in his house, but we never learn much about the other employees, or their relationship to each other. Ruth graduates high school, but it’s uncertain if she actually wants to attend the college she’s been accepted to, or where that is. Ruth doesn’t seem to know whether she wants to leave home, despite there being no future for her, and Blaze continually telling her to just get out while she still can.

When that big moment finally comes, the movie just lets it happen, with no sense of direction about what’s next or if what lies ahead of Ruth is any different than what’s behind her. It’s meant to seem like a moment of bittersweet triumph, as Ruth finally smiles heading down the highway in her brother’s truck, but poverty isn’t a place, it’s a system. Even in its final moments, the story of Ruth escaping that system feels far from finished. Holler doesn’t do a great job of exploring the underlying causes of the culture it places us in, despite there being plenty of avenues to do that exploration. It feels like a missed opportunity.

“Holler” is out Friday in select theaters and on demand.

Classic Corner: How Green Was My Valley

How Rambo Turned a Complicated Antihero into Agitprop

The Thirstiest, Most Comforting, and Variously Joyous Moments of 2020 in Movies