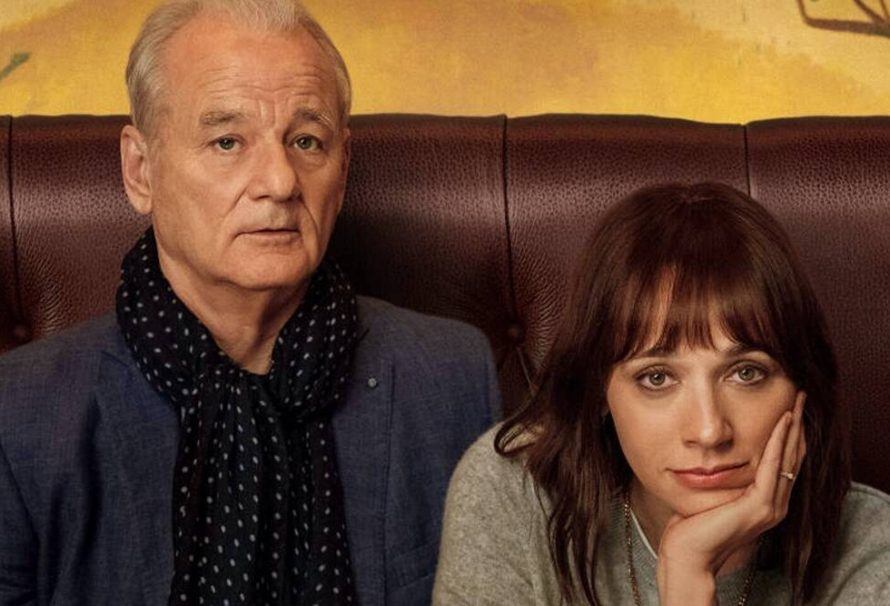 In the opening moments of Sofia Coppola’s On the Rocks, her protagonist, Laura (Rashida Jones) and her husband Dean (Marlon Wayans) , sneak away from their wedding reception for a skinny dip in their swanky hotel’s swimming pool. Coppola follows Laura’s bare feet up to the edge of the pool as she jumps in, yelping with joy and still wearing her veil. Coppola immediately cuts to a similar shot of Laura’s bare feet, now walking through the hallway of her apartment, picking up stray toys.

This is a lovely, informative opener to Coppola’s warm, enjoyable character study of a woman coming to grips with her changing life and marriage, and the other relationship that’s defined her understanding of both–her philandering dad Felix (Bill Murray). Finding herself with two kids and a sporadically-present husband, frequently tired and with a book she just can’t seem to write, Laura fears she’s lost her mojo.

When she suspects Dean might be cheating on her with his new assistant (Jessica Henwick), she calls Felix for insight. He suggests they follow Dean to catch him in a lie, and Laura reluctantly agrees. Eventually, their sleuthing leads to serious conversations about Felix’s behavior in Laura’s childhood, and how it’s impacted her life.

More than anything else, On the Rocks feels like a hangout movie, and it’s hard to think of two people you’d rather hang out with than Jones and Murray. They’re extremely fun together, with chemistry that feels equal parts father/daughter and Tracy and Hepburn. Murray’s low-key charm is a huge part of what makes this work; Felix is the kind of guy who thinks a bright red vintage convertible is the perfect vehicle for a stakeout, and also that stakeout snacks include champagne, crackers and caviar. Jones plays the straight woman, disapproving of her dad’s choices, but still far from immune to his flights of fancy.

But the film falters in its portrayal of the relationship Laura is trying to preserve. Wayans’ Dean is great with the kids and shows Laura affection, but he’s under-written, and their dynamic as a couple feels off throughout. Even in moments where things seem to be going fine, Wayans and Jones don’t feel like a married couple hitting a rut. They feel like two people who barely know each other. When Dean asks Laura how her book’s coming, he sounds like someone she’s casually dating who’s vaguely aware the person he’s with is working on something. That may, however, partly be the result of Coppola not bothering to detail what Laura’s book project actually is, or what subjects she writes about.

On the Rocks’ central relationship – between Laura and Felix – is sweet and subtle, full of a shared history that’s expressed, but never stated outright. It feels natural. That warmth spreads to the way she portrays their New York, a place full of charming restaurants and apartments filled with art. It’s unfortunate the same amount of care doesn’t stretch to all the corners of the film. Even with those weaknesses, it’s a pleasant place to spend 90 minutes, and Jones and Murray give us fun characters to while away that time with.

“On the Rocks” streams Friday on Apple TV+.

Quiz Show and the Lies TV Tells Us