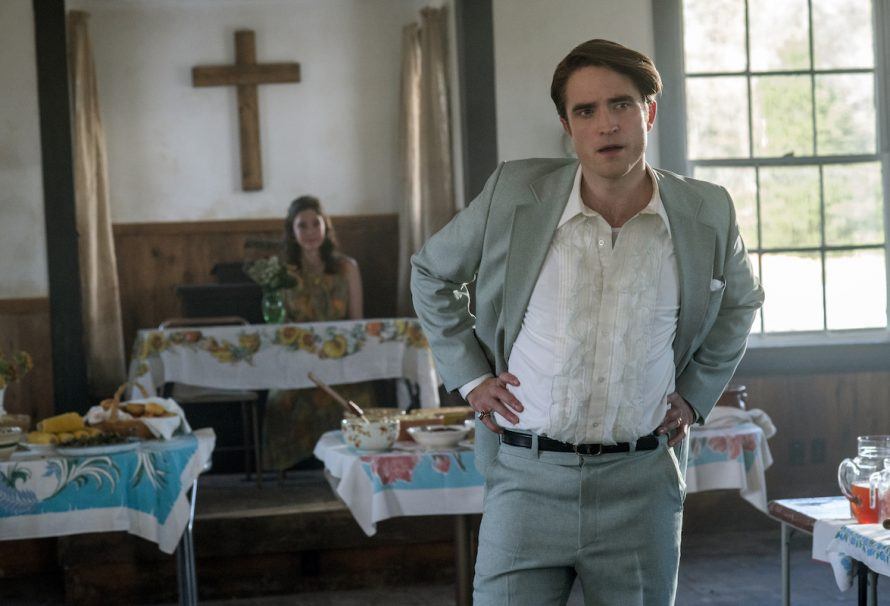 Antonio Campos’ The Devil All the Time, adapted from Donald Ray Pollock’s novel, tells a relatively simple story in a complex way. This 138-minute tale of tragedy and revenge’s collage of tangentially connected subplots make it easy to dismiss as a bloated mess. While the film could be leaner, that criticism feels reductive; The Devil All the Time’s powerful themes take viewers down a fascinating psychological rabbit hole.

Willard and Charlotte’s marriage is disrupted when Charlotte gets cancer. Willard makes desperate, bloody prayers to god to save Charlotte, and is bereft when his wife dies anyway. The couple’s traumatized son Arvin (Tom Holland) is raised by his grandmother and uncle alongside their ward, Lenora (Eliza Scanlen). Years later, another charismatic preacher, Preston Teagardin (Robert Pattinson), comes to town with eyes for the underage Lenora. This kicks off events that resurface the patterns of violence and tragedy that defined Arvin and Lenora’s parents’ lives. It also brings Arvin in contact with Sandy and Carl, now full-fledged serial killers.

The story of Arvin, Lenora and Pattinson’s skeezy Teagardin is the film’s central plot, but that story is informed by all the others surrounding it. The Devil All the Time could have easily been a limited series, and might have been better served by that format. As it is, some characters could be removed from the movie completely with little impact; others, like Sandy and Carl, have fascinating arcs, but feel ancillary because they don’t get the attention they deserve. Despite this, the film remains an engaging exploration of generational sin, life’s ironic coincidences, and its frequent cruelty.

The proceedings are guided by wry omniscient narration delivered in a world-weary drawl by Pollock himself. Like God, the author looks down at his characters, knowing each of their trajectories–their crimes, disappointments and often violent deaths–as soon as they enter the story. He knows the way his characters influence each other, too. This is particularly apparent in Arvin, who can’t forgive his father for the pain he inflicted, however like him he may be.

The major point is that no one’s story takes place in a vacuum. Our lives are influenced by experiences we can’t control, sometimes ones we don’t even encounter firsthand. The only control we do have is how we react to what’s thrust upon us. Campos makes sure we feel his characters’ existential burdens throughout the film. His script, together with naturalistic photography from The Childhood of a Leader and Vox Lux DP Lol Crawley and a gloomy Americana-inflected score by Danny Bensi and Saunder Juriaans, suffuse the entire enterprise with a sense of low-hanging dread.

The Devil All the Time overflows with murder ballad atmosphere and meaty characters who beg for a deeper dive. There’s so much that it doesn’t quite fit into the limitations of a film, and some excellent performances get short shrift as a result. Still, there’s plenty to recommend in spending nearly two and a half hours with Campos and Pollock’s misguided sinners, as they draw  captivating bloody patterns into the hardscrabble Appalachian dirt.

“The Devil All the Time” is now streaming on Netflix.

"If I Could Change, Anybody Could": Arts in Prisons, in Documentary Film

Y2Kinema from Last Night to Relaxer