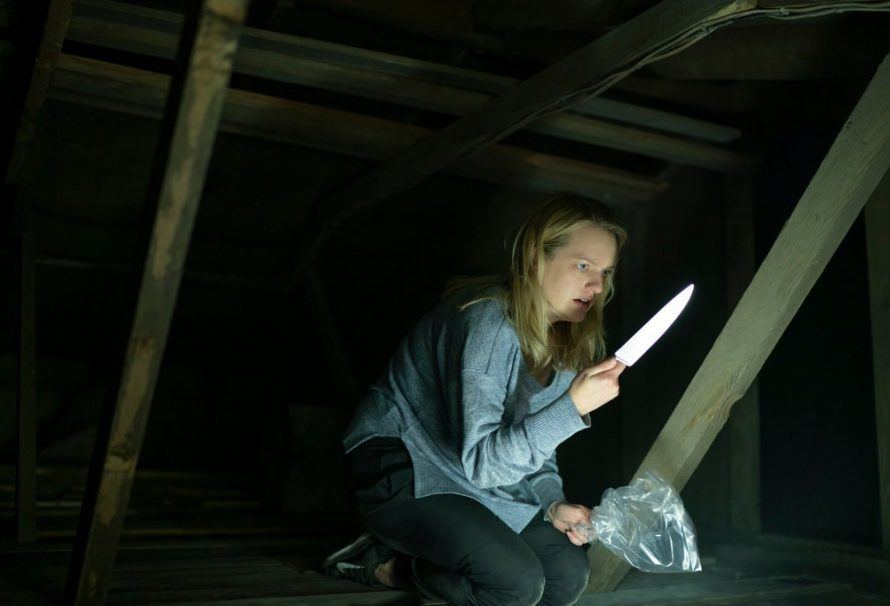 Leigh Whannell’s The Invisible Man feels like three kinds of genre films melded together. One is a thriller about escaping an abusive relationship, in the vein of Sleeping with the Enemy or Enough. The second is a female-driven crime movie, like Double Jeopardy or Eye of the Beholder. The third is what Whannell’s previous movie, Upgrade, was–a down-and-dirty action crowd-pleaser. All three of these styles are good catalysts for the movie’s central concept, and they mostly play well together. The seams occasionally show, but Whannell’s approach is such a clever one that the occasional moments of weakness hardly matter.

Whannell’s script begins with Cecilia (Elisabeth Moss) escaping from the home she shares with her abusive partner, Adrian (Oliver Jackson-Cohen). After Cecilia takes refuge with a friend (Aldis Hodge) and his teenage daughter (Storm Reid), she learns that Oliver is dead of an apparent suicide, leaving Cecilia $5 million. Her relief, however, is short-lived, as a string of creepy events leads Cecilia to suspect Adrian isn’t dead at all. Adrian, a tech whiz, has used his genius to find a way to become invisible, stalking and tormenting Cecilia, not only sneaking up on and physically threatening her, but gaslighting her to friends, family, doctors and the police.

Whannell is using the same idea as James Whale’s 1939 The Invisible Man: a scientist discovers a way to become invisible, and becomes homicidally insane. He’s taken that concept and turned it around here, making his film into a parable about the hoops that abuse and sexual assault victims have to jump through to prove their credibility. Cecilia’s experiences are extraordinary, but the frustration she encounters — having to prove that what’s happening to her is indeed happening to her, only to face doubt and distrust even from her closest friends — is all too familiar.

It’s such a good idea that it’s easy to wish The Invisible Man were slightly smarter and tighter than it is. The fact that it’s a Blumhouse release probably doesn’t help matters, giving Whannell’s movie Get Out-level expectations that it’s not remotely interested in meeting. Whannell also drags out the subtle, slow-burn elements of the story a bit longer than necessary, taking slightly too much time to get to the big action set pieces and twisty conclusion that really make The Invisible Man sing.

However, the movie still has plenty of strengths–chief among them Moss’ performance as Cecilia. Much of the movie involves Moss reacting to–and often fighting against–empty space, and she throws herself into a growing paranoia and desperate anger that is impressive to behold. Over the course of the film, she morphs from jittery, PTSD-consumed victim to cautiously optimistic to paranoid to total badass, and every moment of it is believable.

Whannell also makes excellent use of space, proving that it’s possible to build tension with only the strategic placement and movement of a camera. Some of the most intense moments of The Invisible Man don’t involve floating weapons or jump scares at all; they’re panning shots, or distance shots from odd angles, letting us know someone else is watching without giving up their exact position. That air of uncertainty, which Whannell sets up in the very first sequence, creates a sense of paranoia and discomfort that lingers throughout the film.

The Invisible Man’s timely take on its source material isn’t really meant to be more than an interesting story choice, and if you look too closely at some of the movie’s details, flaws start to show:a couple of plot shifts, and some odd loose ends that don’t quite feel plausible. However, it’s still a very entertaining piece of work. Moss is more than up to selling the big character turns the film asks of her, and Whannell is keenly aware of what kind of movie he’s making, and what he wants to do with it. It’s ultimately just a fun, nasty, pulpy revenge thriller, but at least it’s got some creativity under the hood.

Review: The Other Lamb

“Don’t” Hesitate to Stream This Triple-Feature