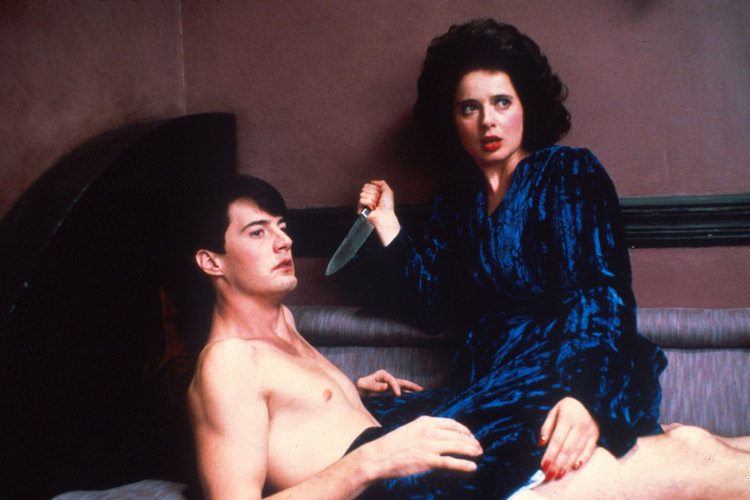 In the 2016 documentary David Lynch: The Art Life, one of the stories Lynch recounts from his childhood is the time a naked woman appeared out of the blue on his suburban street, a bewildering sight for an impressionable boy. He doesn’t make the connection in that interview, but this was clearly the inspiration for nightclub singer Dorothy Vallens’ startling late-night appearance on Jeffrey Beaumont’s lawn near the end of Blue Velvet (out on Blu-ray this month in a new edition from the Criterion Collection). Coming after Jeffrey (Kyle MacLachlan, fresh off starring in Lynch’s misbegotten Dune) has tried to wash his hands of the Vallens affair, this moment reaffirms the connection Lynch makes between nudity and vulnerability throughout the film and serves as a reminder that what Jeffrey has seen and done while investigating Dorothy (Isabella Rossellini) and the degenerate criminals she’s mixed up with will follow him the rest of his days.

For Jeffrey, the road from overgrown Boy Scout to in-over-his-head amateur sleuth starts with the discovery of a severed ear in a vacant lot near his home. This is his first inkling that picture-postcard Lumberton has a dark side he’s never investigated, having previously heeded his Aunt Barbara’s ominous admonition to stay away “from Lincoln.” Naturally, Lincoln Street is precisely where Dorothy lives, so with the help of police lieutenant’s daughter Sandy (Laura Dern as the Nancy Drew to MacLachlan’s Hardy Boy), he hatches a plan to sneak into her apartment, hide, and observe what “The Blue Lady” gets up to when she isn’t singing at The Slow Club. “I don’t know if you’re a detective or a pervert,” Sandy says. Jeffrey’s glib response: “That’s for me to know and you to find out.”

As Jeffrey sets his plan in motion, installing himself inside Dorothy’s living room closet while she’s not home, he seems destined to land in the “pervert” category since the first thing Dorothy does after taking a phone call from someone she has to call “sir” (this we soon learn is drug kingpin Frank Booth, indelibly portrayed by Dennis Hopper) is retreat to the bathroom where Jeffrey (and the viewer) watches her disrobe in long shot. Further frustrating his/our prurient desires, when Dorothy emerges from the bathroom she’s in a modesty-preserving red towel, and to Jeffrey’s alarm she heads straight for the closet to retrieve the blue velvet dressing gown she’s compelled to wear when Frank visits her.

While he initially avoids detection, Jeffrey makes a noise when she steps back into position to continue his surveillance, alerting Dorothy to his presence. Petrified by the realization that he’s given himself away, Jeffrey can only watch as Dorothy goes to the kitchen and returns with a large knife with which she threatens him, making him come out of the closet and be an active participant in what had been, up to that point, a benign if risqué little adventure for him. By forcing Jeffrey to strip for her so she can see him, Dorothy objectifies the voyeur at the same time Lynch strips his compromised hero bare. “What do you want?” Dorothy asks once Jeffrey is down to his underwear (which, like the towel Dorothy just had on, is red). “I don’t know,” he meekly replies, remaining stock still while she slips off his last remaining article of clothing and fondles and kisses him.

Throughout this part of the scene, Lynch frames MacLachlan so the viewer only gets a three-quarter view of his behind, but when Jeffrey and Dorothy are startled by the knock at the door heralding Frank’s arrival, his manhood is exposed during his mad dash to the closet, where he watches impotently while Frank and Dorothy play out their sordid scene of depravity. When Frank orders her to open her robe to him, though, Lynch keeps Rossellini’s back to the camera, keeping the focus on Frank’s face – and Jeffrey’s disgusted reaction to him. After Frank has had his jollies and left, Jeffrey emerges from the closet, once again in his underwear, and attempts to console Dorothy while she’s at her most vulnerable. That she asks him to hold her because she’s scared is quite a turnaround considering how aggressive she was with him just a few minutes earlier. When he finally gets dressed and leaves the apartment, a mere 20 minutes after his arrival, it’s abundantly clear that he understands a little more how the world works, even as he questions why it has to contain people like Frank.

Almost in spite of how hairy Jeffrey’s first encounter with Dorothy was, he tempts fate by returning to her apartment the next day (making sure he does so after Frank has been to see her), going to The Slow Club to watch her sing, and tailing Frank and his goons back to their hideout so he can get some dirt on them for Sandy’s father (and hopefully reunite Dorothy with her husband and son). On his third neighborly visit, though, Dorothy meets him at the door in a red dress (there’s that color again) and invites him into her bedroom for sex, which he enjoys until she forces him to hit her. Tellingly, it is at this point and no sooner that Lynch stops being coy about Dorothy’s (and, by extension, Rossellini’s) body, associating its full exposure with sexual violence, which Frank backs up with the threat of regular violence when he catches Jeffrey leaving her place and takes him on a joyride designed to scare him off for good.

For a brief time, it appears he has been scared off, going back to high-schooler Sandy and taking her to a party that’s as far from the menacing debauchery of Frank and his cronies as you can get. But then comes the mortifying scene where Dorothy shows up at his house – one of the moments Roger Ebert singled out in his scathing one-star review (reprinted in the book I Hated, Hated, Hated This Movie) in which he took Lynch to task for stranding Rossellini’s “convincing and courageous” performance in a story that’s “marred by sophomoric satire and cheap shots.” That may be how Ebert saw Blue Velvet at the time, but in the 33 years since it was released, Lynch has demonstrated time and again the sincerity of his intentions.