Screenlife — the screen-capture-style gimmick-turned-medium used in movies like Unfriended (2014) and Searching (2018) — feels like a textbook bad idea.

The style was largely pioneered by Russian director and producer Timur Bekmambetov, whose studio, Bazelevs, developed technology to propel production of movies told through laptops, phones, or tablets and has since gone all in churning them out. On its face, it’s a format that can easily come across as cheap and easy, a quick cash-in on a setting all audiences are familiar with.

There’s a reason nearly every article about Bekmambetov and his new passion not-so-subtly mentions his age: There’s something inherently cynical about a man nearing his 60s diving headfirst into a low-budget/high-profit filmmaking style that relies on subject matter that’s hip with the kids. Not to mention the title of nearly every film in this format so far — the aforementioned, plus Open Windows (2014), this summer’s Unfriended: Dark Web (now on DVD), and Bekmambetov ‘s upcoming Profile (2018) — is a damn pun.

And yet, remarkably, the Screenlife movies so far are not only experimenting with different brands of a very distinct and shockingly immersive visual style, but they’re also leading with deeply sincere, well-acted, character-centric stories that are often hard to find in tiny-budget horror filmmaking.

I’m not going to pretend these are perfect movies. Sometimes, I’m not even sure they’re good ones. But to me, they represent the beginning of something with serious potential, and well worth anyone’s time. 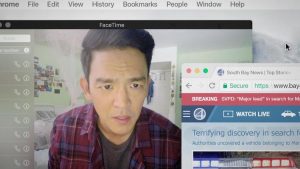 So far, Screenlife has stuck to two ways of telling stories on computers. There’s the Searching and Open Windows style, a kind of high-tech found-footage that zooms in and around the screen and flips between different devices; and then there’s the Unfriendeds, where the action plays out almost entirely on one character’s static desktop.

Both methods have merit, but it’s the latter that gets exciting for me. Searching and Open Windows are more cinematic — TV news, security tapes, and full screen zooms of certain shots help break into different locations or provide more varied, third-party perspectives. Ultimately, it feels more like a traditional movie.

The Unfriended movies have the harder task, and, to me, the infinitely cooler one.

Early on in Dark Web, the main character opens the Skype app and walks away from his computer for a moment. The Skype page pops up, obscuring a Spotify playlist giving the film an in-universe score, a Facebook chat with the character’s girlfriend, and, underneath it all on the left side of the screen, a sliver of a video feed from the character’s webcam.

Suddenly, there’s a ding, and notifications for Facebook messages from strangers start stacking up in the right hand corner. The character walks back to the computer, stops short right in frame of the video feed on the opposite edge of the screen, pauses, looks confused, and then sits down.

Dark Web and Open Windows do this constantly — layering or timing video feeds, texts or webpages in different windows to build up to a kill or a reveal or insight into its characters, and all in ways that feel at home in a theater.

Everything on screen in these movies, especially in the Unfriended franchise, is deliberate. If a mouse hovers near text on the screen, it means the audience is supposed to notice it, but also that the main character is interested or thrown off guard or hesitating. If a character pulls up an old video, it gives the audience necessary information, but also shows what’s on her mind.

As someone who, like most of us, spends an ungodly amount of time behind a laptop, the resulting experience is insane to me. Even when the movies end, they change the way I interact with my own laptop and phone.

Not to mention, I can never again listen to a Skype sound effect without losing it.

It’s a wholly encompassing experience, and not just visually. The Unfriendeds (and, to an extent, Searching) use the way we use technology to interact with people to construct a storytelling style that’s as immersive as it is intimate.

When a character types out a message, we see them pause, delete, and revise before sending. We see how other characters see them on a video chat and the six other things running through their heads or desktops.

Unlike traditional filmmaking or found footage, Screenlife movies are dedicated to showing you how a person is seen and how they want to be seen, played out in real time with tactics we all use every day.

None of the current Screenlife movies are overtly about who we are online (or who we are around other people) versus who we are to ourselves, but the idea is in the DNA of every frame.

At their worst, Screenlife movies are cheesy experimental films, where maybe the intentions are more interesting than the execution. But at their best, they tell stories that literally could not be told as effectively any other way.

An empathetic format is one thing. Using it to elevate stories is another.

This is best seen with the Unfriended franchise, an anthology series where the movies are connected not only by format, but by what they do with that format.

In Unfriended, the ghost of a girl who killed herself due to cyberbullying haunts her social media accounts to get revenge on six friends who, in one way or another, did her wrong.

It’s no masterpiece, but it’s more than just a supernatural slasher flick. Using Facebook and Skype, the ghost gets violent and emotional retribution, forcing her friends to admit how they betrayed her and each other, pushing them to choose who they care about most, and then, obviously, killing them.

Dark Web drops the supernatural element for a villain that feels closer to home: a team of ruthless hackers and human traffickers capable of using an older group of friends’ private technology and online presences against them — invading everything from laptops to webcams to Facebook and Skype accounts — when the protagonists learn too much.

In both movies, we get to know the protagonists in the context of a digital world that will ultimately terrorize them. In Unfriended, selfish teenagers trash a friend seconds before she joins a Skype call, or a character reminisces by scrolling through old Facebook posts. In Dark Web, characters seek connection, either through a game night with friends or romantic gestures, and reveal who and what they care about when they think no one else is listening.

Horror movies work best when the danger feels too close for comfort. Screenlife wraps that danger in a visual format the audience is familiar with, and reminds them of the real pain that world can cause. Maybe a ghost won’t haunt your Facebook, but an anonymous screen name may grant you the opportunity to hurt someone without consequence. Maybe a team of hackers won’t go after your friends for fun, but the information you keep online may not be as private as you think.

Without Screenlife, Unfriended and Dark Web would likely be middle-of-the-road to bad horror movies, too separate from the fears they’re commenting on to make an impact. With Screenlife, something important happens: The subject matter of the movie becomes the setting, and the themes and format of the story constantly build off each other.

With each of the Bekmambetov-produced Screenlife movies, Unfriended, Dark Web, and Searching, filmmakers have added elements that make them feel unique. Unfriended was the most contained; Dark Web expanded to more locations and devices; and Searching became more cinematic, molding a mystery that makes every inch of its screen an information playground for the audience.

The medium has already proved it’s no one-trick pony, and Screenlife isn’t going away any time soon. Bekmambetov’s company has already committed to completing 14 new films told via screens in the next 18 months, crowdsourced pitches for future films, and shown interest in breaking into still more genres.

Profile, a political thriller based on the real-life account of a journalist investigating and infiltrating ISIS, premiered at festivals earlier this year. A comedy called Liked, horror film Unfollowed (puns), a Snapchat version of Romeo and Juliet (I know), and, I’m assuming, some kind of payoff to all the alien invasion references in Searching, will likely be on its tail.

I don’t know how long Screenlife will feel fresh before the novelty wears off. Part of me still thinks Screenlife movies are constantly one misstep away from becoming a trainwreck. But the other part of me, the part that has constantly been surprised by this medium and what it can do, hopes I’m proven wrong.