Like any good Gen Xer, I trace my love of horror movies to the made-for-TV movies of the 1970s. Inspired by cinematic blockbusters like Rosemary’s Baby, The Exorcist, and The Devil Rides Out — and by an establishment-averse zeitgeist thrumming with interest in astrology, the tarot and other occult arts — television’s three big networks dabbled in demonic stories that thrilled adolescents and freaked out their parents (that is how I recall it, anyway). These movies (and a handful of TV series including Circle of Fear and Kolchak: The Night Stalker) were a constant source of chatter at school and, for pre-teens like myself, a measure of how cool you were if: a) your parents let you watch them, or b) your parents forbade you watching them but you somehow managed to see them anyway.

Once the 1980s arrived, with movies dominated by the Lucas and Spielberg visions of sanitized space fantasies, and under the watchful eye of the growing Moral Majority, the 1970s “cheesy horror” genre —  typified by erotic, spooky occult stories of girls gone bad — lay fallow until the late 1990s, when The Craft brought it cackling back to life. But for a glorious decade or so, it was witches and sorceresses and headmistresses, oh my. The fact that there were actual witches in growing numbers was feeding this media obsession, and Hollywood obliged with plenty of primetime witchery. It’s hard to say if these films were intended as warning or mere entertainment, but the witches were often thwarted by their intended victims.

Crowhaven Farm (1970, available on Amazon Prime) was a heaping helping of cheese full of white people living in Massachusetts. Hope Lange is a woman who inherits an old farmhouse in Salem and starts having terrifying nightmares and visions from the point of view of its former owner, who was tortured as a witch. There’s an evil young trollop who tries to seduce her husband, too; it’s all very The Crucible meets The Twilight Zone. Despite its silly costumes and bad acting (except Lange, who does her best with a bad script), Crowhaven Farm has a deliciously spooky vibe and is one of a number of films during that era that explored the trendy topic of past lives (along with Audrey Rose and The Reincarnation of Peter Proud). This movie, directed by the prolific film and TV director Walter Grauman (he directed The Old Man Who Cried Wolf that same year), has the dubious distinction of igniting my lifelong interest in witchcraft and occult horror cinema. 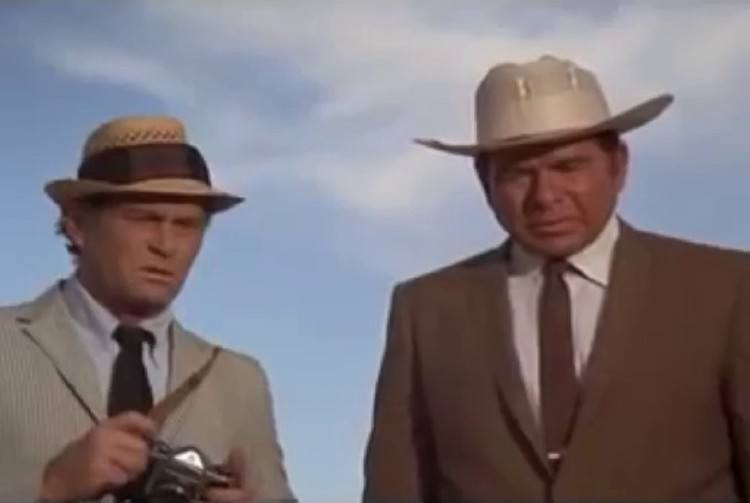 The Night Stalker — about a serial killer in Las Vegas who turns out to be a vampire — came along in 1972, with a follow-up primetime movie in 1973 (The Night Strangler) and the 20-episode series Kolchak: The Night Stalker in 1974-75, which proved to be a major inspiration for X-Files and Millennium creator Chris Carter. It was the figure of Carl Kolchak, played by Darren McGavin, who gave these stories their mass appeal: a wisecracking, somewhat bumbling newspaper reporter in a slouchy white seersucker suit and porkpie hat who was drawn to crime stories that had supernatural origins, and who would face life-threatening danger trying to do his job.

1973 was a stellar year for occult storylines in cinema (The Exorcist, The Wicker Man, Don’t Look Now, Theatre of Blood, Ganga and Hess, The Legend of Hell House) as well as on TV, where supernatural anthology series like The Sixth Sense and Circle of Fear (originally titled Ghost Story) were finding an audience. All hell literally broke loose in ABC’s TV movie Don’t Be Afraid of the Dark (available on Youtube and Google Play), in which Kim Darby (famed for True Grit) stars as a young housewife terrorized by some super-creepy demonic creatures that live beneath the stairs of her new (but actually very, very old) house. No one believes her, and given she already has some emotional problems, it’s simply assumed that the move has been stressful and causing her to “see things.”

Directed by actor-director John Newland, the film also starred Jim Hutton (Ellery Queen) and was probably one of the most talked about films of the year; it was subtle, atmospheric, and absolutely terrifying. The 2010 remake, starring Katie Holmes and Guy Pearce and produced by Guillermo del Doro, is basically dreadful, and was the last proof I needed that CGI monsters are just not scary at all.

The same year also brought Satan’s School for Girls — obviously the time for coy titles was over. This ABC movie (available on Amazon Prime) starred Kate Jackson, who would later play the “smart one” (read: brunette and slightly less sexy) on Charlie’s Angels. The film has a plot that foreshadows Dario Argento’s Suspiria (1977): a young female student (Pamela Franklin) discovers strange goings-on in her new school and tries to find out what’s at the root of the evil with the help of her roommate (Jackson). It turns out a coven of witches, revealed in white robes during a sorority initiation, is being led by Roy Thinnes, with Jackson as his high priestess.

The portrayal of a female-only enclave as a hotbed for satanic worship was seen frequently in films during this period; were girls seen as being vulnerable, or drawn to evil, or both? Certainly the Madonna-Whore dichotomy cannot be the only defining contradictory state for women: There is also the Hapless Victim-Seductive Strumpet archetype. Jackson, as a duplicitous woman who lures her friend closer to the truth, proves one has to play at one archetype in order to embody the other. Like their witch forebears of Colonial times, contemporary witches were also, apparently, hiding in plain sight. 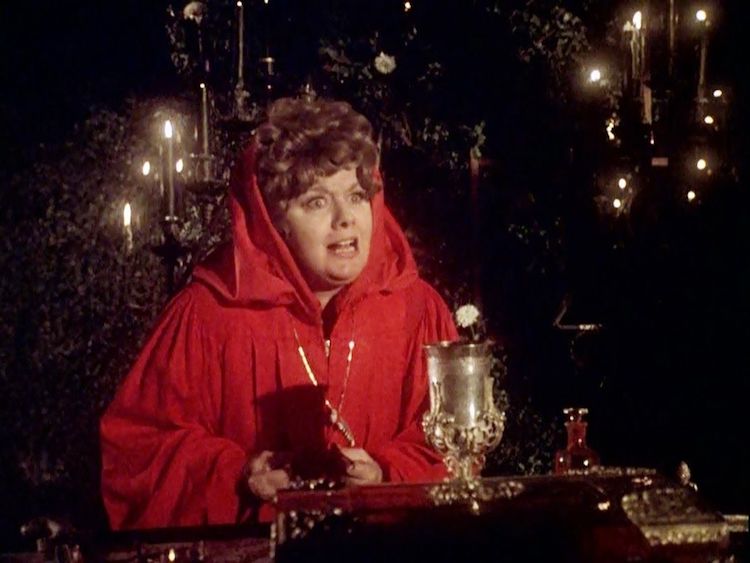 Certainly one of the most successful movies of this “witch school” cycle was The Initiation of Sarah (available on Amazon Prime), a star-studded thriller that premiered on ABC in February 1978. Kay Lenz, who already had a fairly successful film career, plays Sarah, a shy, mousy college girl who lives in the shadow of her gorgeous sister (Morgan Brittany). The two are accepted into rival sororities, one popular and competitive, the other the subject of ridicule and scorn, and Sarah is ostracized by her sister’s new “sisters” (“We’re your sisters now” is uttered more than once). Sarah’s sorority has a “house mother” named Erica, played by the legendary Shelley Winters, whereas her sister’s sorority is run by vain, ruthless Morgan Fairchild. Sarah seems to have a gift for telekinesis that bursts forth when she is angry; this story is clearly inspired by Carrie (both the Stephen King novel and the Brian de Palma movie) But where Carrie is truly alone in the world but for her insane mother, Sarah is close to her sister, makes friends with the other misfits in her new sorority, and even begins socializing with a handsome young teaching assistant. Erica sabotages Sarah’s slow progress and wants to harness Sarah’s powers to serve vengeance on the rival sorority, with which her house has been at odds for decades.

There’s a fascinating theme exploring women’s trust, loyalty and anger here, and, much like Carrie, the film’s trappings (candles, knives, white robes, chanting), and tone (wistful/innocent, then angry/cruel) are wonderfully witchy and ritualistic. But whereas Carrie is only called a witch by her religiously deranged mother (who tries to get Carrie “pray away the sin”), Sarah is being actively groomed to be an actual witch by Erica, a devotee of the dark arts who wields a large brass pentacle during her new acolyte’s initiation, urging Sarah to focus her anger. Message: Sororities, and maybe campus life in general, were seen as dangerous influences on young women, possibly hiding satanic activity. Also: Caught up in the lust for power and the intoxication of jealousy, sister will turn against sister. And lastly: Angry women are troublesome. 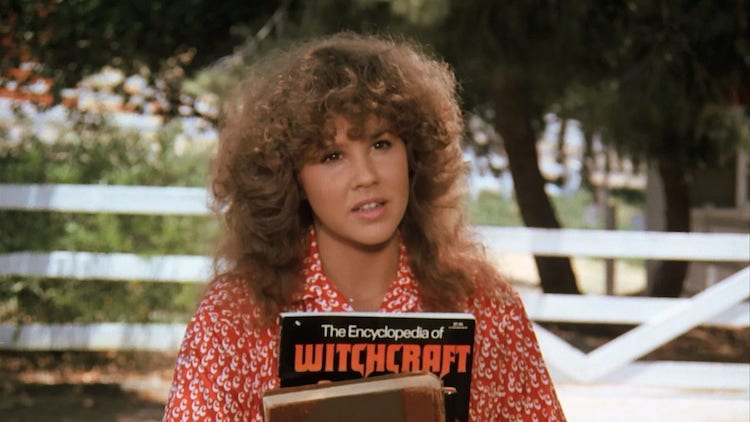 Another 1978 TV movie touches on this theme of contemporary witchcraft and adolescent female rivalry. The Exorcist’s breakout star Linda Blair starred in a number of controversial made-for-TV films in the 1970s (including Born Innocent and Sweet Hostage), but the only one with an occult-themed story was Stranger in Our House (later released theatrically as Summer of Fear; available on VOD), directed by Wes Craven. Blair stars as Rachel, a teenage equestrienne whose mysterious cousin Julia comes for an extended visit after her parents are killed in a car crash. The shy cousin undergoes a dramatic transformation, from bookish and mousy to bold and sexy, eventually stealing Rachel’s boyfriend on prom night (wearing a pink dress; more homage to Carrie?) and endearing Rachel’s parents to her.

After she finds strange clumps of paper covered in molten wax and human hair, Rachel suspects Julia of using witchcraft, a theory that is supported by the local occult specialist who conveniently lives in the neighborhood (seriously, as a kid I kept assuming there must be one of these guys in my neighborhood, too, so ubiquitous were they in the movies). Of course, Rachel’s parents think she is just being difficult and jealous, and when she confronts Julia about her actions, she just smiles and tries to placate an emotional Rachel. Blair is a fairly good actress, but her tendency to appear in mediocre horror films did typecast her for many years. As Rachel, she seems to be walking in the shoes of her mother from The Exorcist: worn to exhaustion and seemingly hysterical to everyone around her because she knows something satanic is afoot.