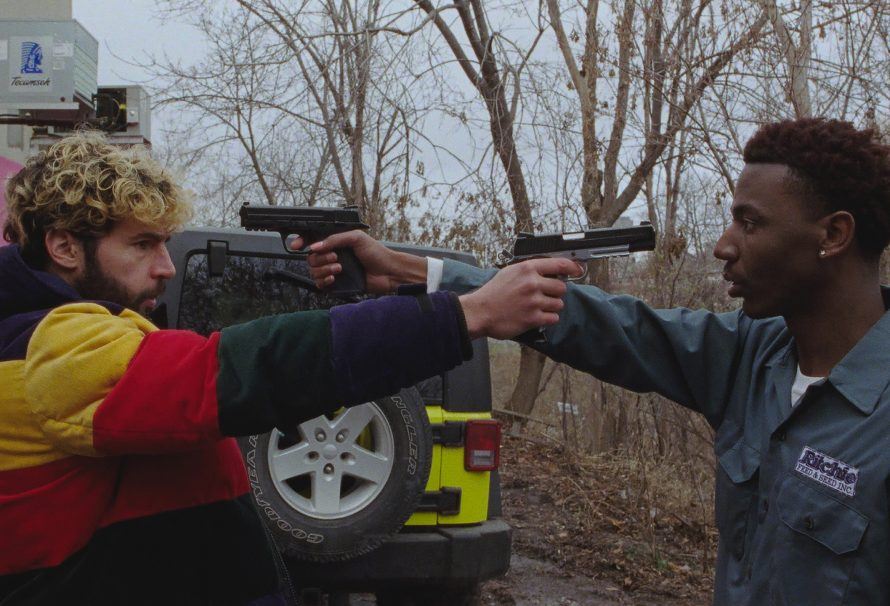 At first glance, On the Count of Three seems like the typical formula for a Sundance movie: take two disparate, seemingly conflicting elements, put them together, and hope you get a peanut butter & jelly sandwich. Making a comedy that also takes suicidal thoughts and depression seriously seems like an impossible task that would easily fall into the trap of being too crass, thoughtless or insensitive. Fortunately, director and star Jerrod Carmichael balances its elements, telling a story that’s as nuanced and grounded as it is funny.

Carmichael plays Val, a man working at a job he absolutely hates (despite his prowess at it). His best friend since childhood, Kevin (Christopher Abbott), is institutionalized after many years of emotional issues and seeing various therapists. Both men have separately decided to take their own lives; Kevin attempted to take his days earlier, while Val makes an attempt on screen. While visiting Kevin, Val decides the best way for both of them to check out is together, so he springs Kevin from the institution and shows him the matching handguns he’s procured for them to use simultaneously on each other. Before the two can pull the triggers, Kevin decides he wants a “bonus day” where the two can address issues with their past and also do whatever they want. Val agrees, which makes sense; each of them have a number of accounts to settle, and neither Val nor Kevin are quite sold on taking their own lives.

A lesser film would’ve used the excuse of such “freedom” to send the pair of buddies on a rollicking rampage, setting up a series of setpieces where they do increasingly crazy things. The clever script by Ari Katcher and Ryan Welch turns these expectations on their head, having Val and Kevin encounter everything from dirt bike riding to gas station robbery in ways that are neither nihilistic nor frivolous. The pervading tone is one of honesty, as both men are finally allowed to admit things to themselves and others that they’ve held back for a long time. For that reason, the film feels refreshing, exploring issues like romantic relationships, familial abuse and childhood bullying without the usual social barriers people—especially men—put up around such things.

As a director, Carmichael gives the film a lot of energy, making choices in the pacing of scenes and editing that have a distinctly comedic flavor. One such sequence sees Val and Kevin going to confront Kevin’s childhood therapist, fully intending to kill the man as cinematographer Marshall Adams’ camera follows them in one shot from the building parking lot to the office door. Of course, they’re thwarted in their attempt, the payoff of the long shot “joke” being the mundane scene that follows.

Where Carmichael’s comedy background really shines is in the casting—not only himself, but people like J.B. Smoove, Tiffany Haddish and Henry Winkler (playing what must be his darkest role yet) help blend the film’s comedic rhythms with its grounded character work. Abbott’s casting is perhaps the most unique in this way, the movie’s potentially bleakest and most troubled character being played by an actor known for his dark choice of roles who is perversely the funniest guy in the movie. His car ride sing-along to Papa Roach’s “Last Resort” is a highlight both for its ridiculousness as well as its sincerity, kinda like the song itself.

While Carmichael attempts to do his utmost to take suicide seriously, the somewhat upbeat nature of the film may cause some to feel like there’s still a facetiousness there. What saves On the Count of Three from being a hollow lark is the undeniable chemistry between Carmichael and Abbott, a pairing that somewhat evokes the classic buddy cop African-American/white guy duos as well as even the Western, with the two turned into a sort of suburban Butch & Sundance by the finale, their past finally catching up with them. Carmichael allows the outsized climax of the film to buy the story’s life-affirming ending without trivializing the men or waving away their mistakes. The final shot is a wry statement on the struggle many of us have with choosing to live another day—no matter how miserable things get, we are not alone.

“On the Count of Three” is now available for virtual viewing via the Sundance Film Festival.