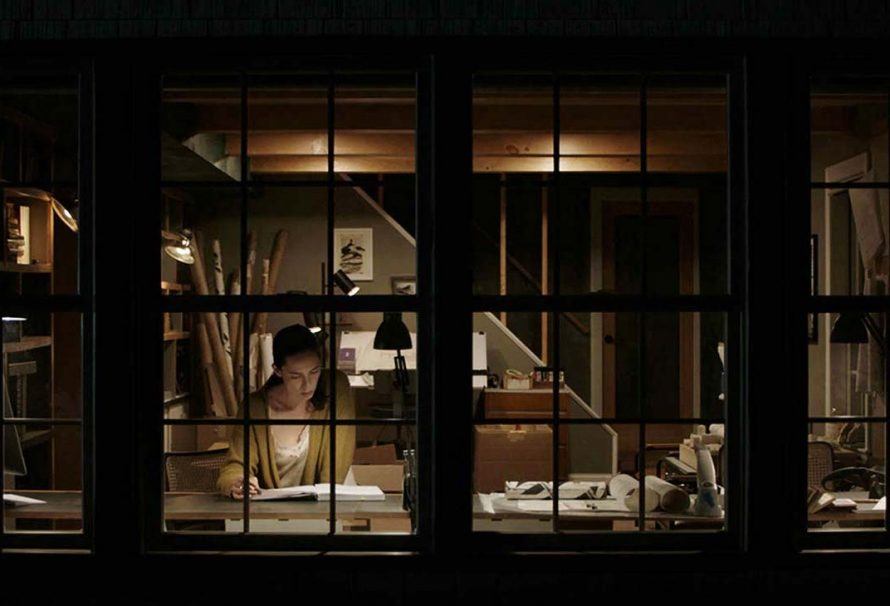 Horror filmmakers love to build stories filled with outrageous furnishings, but any lasting power their movies have is due to how hard they strike a core, internal fear. The Night House is a movie that, like the mazes referenced in the film’s plot, has a lot of dead ends and wild turns, but at its core is the question of what secrets another person may hold, and how knowing the truth may or may not affect one’s feelings. Lurking even beneath that is a fear about the unknowability of death, the ultimate destination for us all, and what — if anything — lies beyond the mortal plane. Like the film’s titular structure, The Night House has a lot going on inside of it.

One of the pleasures of the script by Ben Collins and Luke Piotrowski (who also wrote 2017’s similarly smart Super Dark Times) is how it builds its premise, leading its protagonist and its audience down a path that is deceptively simple at first only to end up wildly complex. Schoolteacher Beth (Rebecca Hall) is a new widow, her husband of many years, Owen (Evan Jonigkeit) having mysteriously committed suicide. The complete unexpectedness of the act — as Beth explains to her friend, Claire (Sarah Goldberg), it was she who struggles with depression and mood swings, not Owen — sends Beth into a spiral of grief, her behavior at school and at social events more unhinged than before as she attempts to drown her sorrows with alcohol.

At first, her experiences of lucid dreams involving Owen and unexplained paranormal phenomena at the house he built for her by a lake seem to be wish fulfillment hallucinations (or perhaps an indication of a mental disorder), but it’s when Beth starts finding odd clues about her late husband’s secret habits that she begins suspecting there’s more to Owen’s suicide than emotional issues. The most troubling evidence is a picture on Owen’s phone of a woman who looks almost exactly like Beth, but is not her, leading Beth to discover that Owen may have had a history with several doppelgänger women at a secret house he built in the woods—which has a floor plan that is the complete reverse of her lake house.

As that description implies, things get pretty crazy as the film goes on, and while each building block put on top of the other carries enough logic to feel satisfying, the final finished puzzle is a bit baffling. For someone whose importance to the story ends up being quite large, Owen is oddly kept off screen as much as possible, a choice that perhaps was made due to the larger thematic idea of Beth not ever being able to truly know the man she had been married to for years, yet one that is still oddly distancing. As the plot continues to twist, there are some other elements that are left deliberately vague, and while these were also likely intentional choices to evoke the natural fear that comes with ambiguity about the afterlife, it adds to the mountain of questions that the ending of the film doesn’t quite provide answers to.

The upside of all this vagueness and ambiguity is that it ultimately serves the tone of the film, which is really, really damn scary. Director David Bruckner has quietly been establishing himself over the last decade as one of this generation’s most dependably solid horror filmmakers, and The Night House should serve as his primary director’s reel for years to come. Some of the most ingenious jump scares ever made are in this movie, a fact made even better due to none of them being made up of obvious elements — if they were verbally described in a dispassionate manner, they wouldn’t sound scary at all, but within the context of the film, they have the power to make an entire audience jump. Part of that payoff is due to Bruckner’s grounding of the film around the wilder moments, making it a showcase for star Hall. As an actress, Hall has become a similarly reliable performer, so it’s wonderful to see her let loose here, making Beth into a messy, complex, multi-faceted heroine with a perfect mix of resilience and vulnerability. Owen may be a bit of a cypher in the film, but Hall’s performance makes up for that, imbuing their past (and present…?) relationship with real history and feeling.

That relationship makes The Night House into a unique film within the current horror landscape, because despite its occult/supernatural/satanic trappings, it’s ultimately a riff on the gothic romance. It’s implied early on that Owen may literally be haunting Beth at their old house, and the house itself is a sort of conduit for not just his spirit but their relationship. For most of the film, Beth isn’t just seeking answers about the phenomena she’s experiencing, but is actively attempting to reconnect with her lover, ultimately doing so in a sequence that’s audacious in its romantic and erotic overtones. As the movie eerily implies, there may indeed be nothing after this life, and therefore it’s the memory of those we love as well as those still living who love us that is the only thing that can save us from despair and damnation. The answers may still be a mystery, but we’re all headed to the other side eventually — best to just wait for now.

Nighthawks and Oscar: Changing the Image of Sylvester Stallone