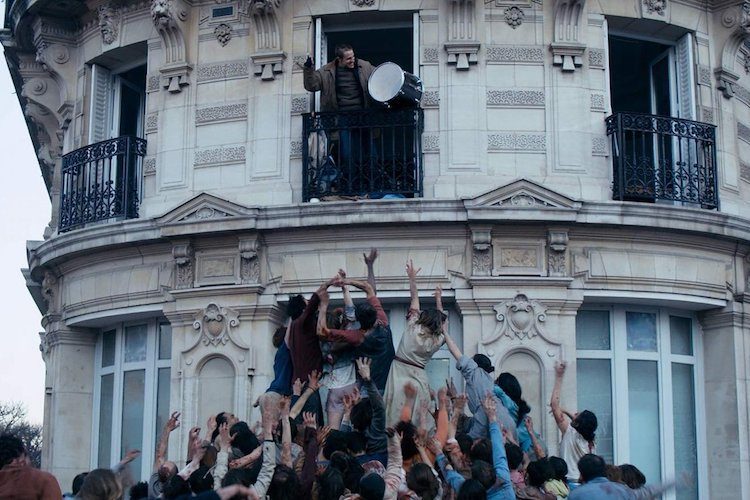 (Screened at the 2018 Fantasia Festival; now playing in U.S. theaters and VOD)

The Night Eats the World (“La nuit a dévoré le monde”) has a different mood from most zombie films, which proves to be refreshing. It’s less mayhem-oriented, quieter, more drama than horror (though not without its horror), with a compelling central performance and top-notch makeup effects.

It’s about Sam (Anders Danielsen Lie), a sad-sack musician who stops by his ex-girlfriend’s house to pick up a box of cassettes while she’s throwing a party, dozes off upstairs while looking for them … and sleeps through the zombie apocalypse. He wakes up to find the house and the whole neighborhood (maybe the world?) empty except for a lot of corpses and the occasional shuffling, convulsing flesh-eater. It’s a terrible turn of events, yet also the best-case scenario for a man who fell asleep at his ex’s house during a party and was expecting to feel humiliated when he went downstairs.

Here’s where the film takes a slight turn from the usual formula. Instead of looking for other survivors or seeking a way to defeat the zombies, Sam hunkers down. He finds a six-flat apartment house where all units but one are zombie-free (he just has to lock them in; they’re not smart), giving him almost the run of the place. The hordes in the street, barricaded from entry, disperse after a while. There’s one old zombie, Alfred (Denis Lavant), caged in the elevator car, who becomes Sam’s sounding board. “Being dead is the norm now,” Sam muses. “I’m the one who’s not normal.” Alfred makes no reply — indeed, the zombies in this movie do not moan or snarl but remain eerily silent, even when ravening, an unsettling effect.

Adapted from a novel by Pit Agarmen and directed by first-timer Dominique Rocher, the film avoids stagnation by involving us in Sam’s life and not making us privy to any more information than he has. We accompany him as he skulks around gathering supplies, exploring the apartment building, wordlessly preparing his defenses and establishing a routine. We’re also with him as his isolation makes him start to go a little crazy.

Anders Danielsen Lie, who gave a wonderfully vulnerable performance in Oslo, August 31st, engages our sympathies here with a few moments of reflection; this is a zombie movie that cares about life. He also performs, or seems to perform, two eyebrow-raising, pulse-quickening stunts, one in an elevator shaft and one on a rooftop. There’s downtime in the story, but never for long, and Rocher always handles the tension of the near-misses and surprising encounters skillfully.

Things take another turn in the third act, when Sam encounters a fellow survivor (Golshifteh Farahani) who shakes him out of his complacency. As with the ex-girlfriend, Sam needs to move on from his present situation, which is safe for now but unsustainable. For us, this intimate, small-scale zombie drama is a nice change of pace that still rattles the nerves.

1 hr., 34 min.; not rated but probably R for moderate zombie gore; in French with subtitles