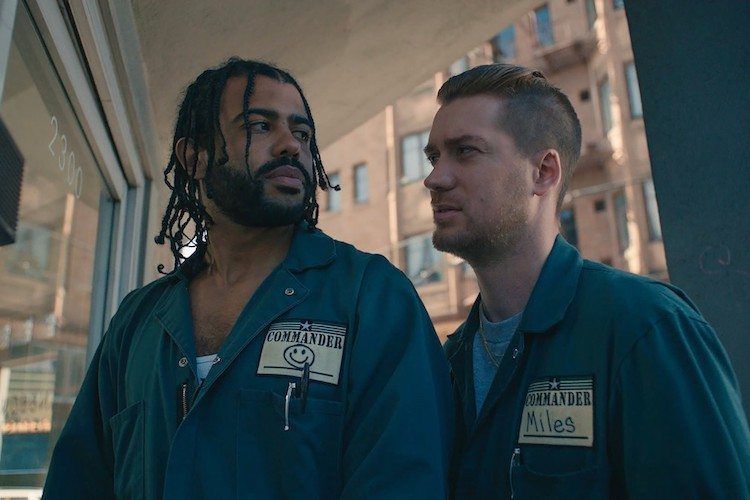 Blindspotting is nearly a musical. Music — specifically rapping — plays a significant role in the development of the film’s themes and its main characters, best friends Collin (Daveed Diggs) and Miles (Rafael Casal), to the point where rapping sometimes takes the place of dialogue. And the film, written by Diggs and Casal, is better for its lyricism. Throughout, the presence or absence of rapping gets to the heart of Collin’s struggle to break out of his criminal image and points toward Miles’ complicated relationship with his friend and his hometown.

Miles, a white person from Oakland, is often portrayed as an aggressor, as a man whose masculinity can turn toxic. He’s a loving father and husband, and a good friend, but he’s also consumed by his pride. Miles buys a gun to protect his family but doesn’t consult his wife, or respect the fact that Collin, in his last days of probation, can’t be around guns. The gun goes off (as it must), leading to an incredibly charged shouting match between Collin and Miles about who Miles gets to be as a white person from Oakland. Collin points out that many of the negative stereotypes that are consistently leveraged against himself true about Miles; Miles just gets away with it because of society’s blind spots toward him.

Part of that complicated identity that Miles has formed is rapping. Most of the scenes that involve Miles rapping or using spoken word are incredibly entertaining and hysterical, director Carlos López Estrada injecting lyricism into both the blocking and editing. But Blindspotting also points to the lingering emptiness behind how Miles, due to that complicated identity, sometimes makes use of lyricism.

Two of the most explicit moments are when Miles raps to sell things. It’s not that that’s inherently empty, but it becomes his most prominent reason for rapping, rendering it more about showmanship and performativity. After a spoken-word back-and-forth between Miles and someone interested in a boat that Miles and Collin are selling, Collin asks Miles what he was saying to the buyer. Miles reveals that he didn’t really know what he meant by any of it. He just wanted to sell the boat.

On occasion, Miles uses rapping, sometimes freestyling, positively. The first time that Miles and Collin share a scene alone, the two freestyle together, playing off each other and hyping each other up. It’s truly special bonding that sets up a powerful basis for their friendship. And toward the middle of the film, when Collin and Miles, working as movers, are clearing out a run-down house and Collin starts freestyling, Miles feeds off of him, quietly including a sad line about his dad. It’s one of the few times Miles gets vulnerable, and it’s no mistake that it’s through rapping.

What’s even more telling is how much space Miles takes up and how little space Collin gets. That first scene and the scene in the run-down house are some of the few times that Collin raps, and they’re both sincere moments. While clearing out the house, Collin finds a picture of the black family that apparently used to live there, and he takes the emotion of seeing that and expresses it in his freestyle.

Consistently, though, Collin is stripped of his voice, symbolized by his lack of rapping. As he tries to steer clear of trouble in his last days of probation, Collin confronts the awful (but expected) notion that, despite his becoming a more caring man, people still perceive him as a criminal. Even in small, intimate conversations, we see him struggle to find any response to racist micro-aggressions, with Diggs absolutely nailing Collin’s inability to speak. And when Collin does call something out, it has little effect, further silencing him as well as loading tension onto his shoulders.

One of the most unsettling moments of this comes when Collin, in his work space and in front of his ex-girlfriend/co-worker, encounters a guy who was at the fight that sent Collin to jail. The guy starts telling the story of the fight; Collin asks him to stop but is ignored. The story is then literally manifested, edited with the same lyricism that Miles’ scenes got and utilizing a narration technique seen in 2015’s Ant-Man. While the sequence appears entertaining and humorous, it ends up sobering, as it becomes clear that Collin’s story is being co-opted, his voice stripped, and his image manipulated by someone blind to how painful that story is. In fact, we never actually get Collin’s side of the story.

Miles’ and Collin’s rapping clashes in a key nightmare, in which Collin is back in the courtroom we saw him in at the beginning of the film. The sequence is difficult to stomach, as the judge is the white cop Collin saw shoot an unarmed black man in the first act, and the witness testifying against Collin is none other than Miles, who suggests — via rapping — that Collin is the criminal people see him as. In typical nightmare fashion, Collin can’t speak, but that aspect takes on significant meaning in the context of the rest of the film and considering the bullets spilling out of his mouth.

With tension mounting on a silenced Collin, Blindspotting seemingly has to end in the way that it does. Having made it past his last day of probation, Collin goes out on a moving job — as fate would have it, to the house of the murderous cop. Collin discovers this and finds the man in the house, prompting an unbearably tense standoff. The cop goes for his gun on a shelf, but Collin gets to it first, holding up the cop.

In expressing his pain and anger at everything he’s been through, this cop being both a literal part of that as well as a symbol of it, Collin raps. And the scene is simply transfixing. The editing is forceful and powerful, but just as lyrical as any other scene. Estrada’s close-ups are raw and bracing, giving the platform to Collin. Diggs’ lyrics and flow, as well as how he fully turns himself over to Collin’s pain, cuts deep.