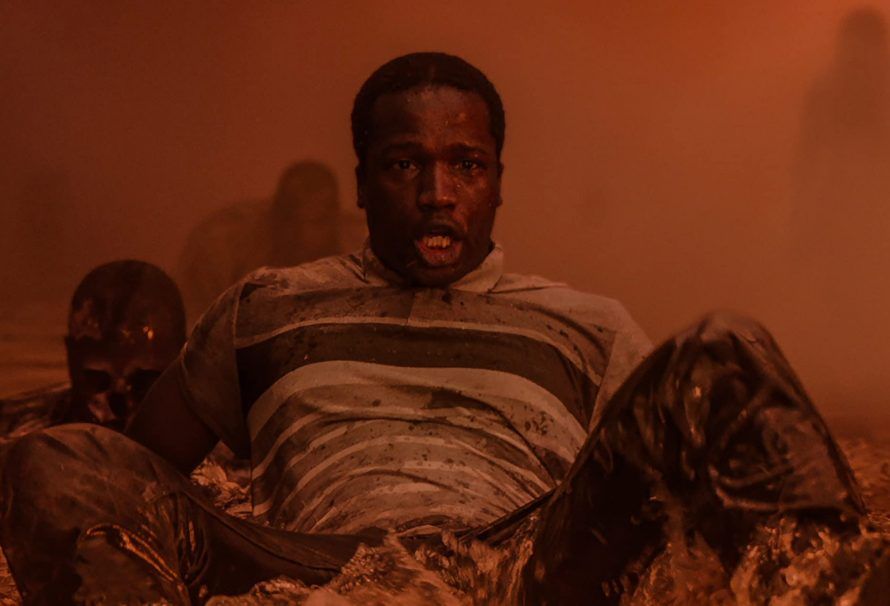 What a year it’s been. I have no jokes, no memes, just an impending sense of tentative relief that this festival of mayhem might be over by this time next year. Among the warped funhouse attractions that America has endured in 2020, the exhaustingly predictable response to a global pandemic tops the list. While most countries are enjoying outdoor, mask-free activities due to their top-down diligence and overall sense of concern for their fellow citizens, the chest-thumping U.S. of A is stuck in a drawn-out first wave as unnecessary as its leaders’ bibles. In a turn that surprises no one, the country constantly touting its own exceptionalism somehow thinks that science denial is a real opinion that deserves the same consideration as scientific fact. The result is a death rate that has far exceeded the number of casualties in the entire Normandy campaign of WWII, rising cases at the rate of a small city per week, and an already suffering economy stretched out on the rack. Within that economy is a struggling movie theater industry that keeps trying to re-open, only to shut its doors again due to low ticket/concession sales. I’m not going to a theater anytime soon because cell phone policies and cleanliness were abysmal in healthier times; no teenager making minimum-wage is going to do anything when some Punisher logo-wearing dunce throws a tantrum over being told to wear a mask like a decent human being. I’ll stream from home in my Fright Rags pajamas.

But that doesn’t mean I don’t miss it.

I miss the collective feeling of excitement as the opening credits roll on a blind screening at a film festival. I miss waiting until the loudest moments in a tense film to crunch on my chips and queso. I miss the mass din of gleeful revulsion at a particularly gory kill scene. Most of all, I miss the (mostly) distraction-free feeling of attending the silver screen church with a crowd of reverent fellow devotees of the horror genre. I saw two fantastic horror films at the local cineplex this year (in early pre-quarantine 2020), Gretel & Hansel and The Invisible Man. While I enjoyed plenty of movies online this year and participated in a few digital film festivals, there are a handful of features that would’ve gone over like gangbusters if they were stretched across a giant theater screen. This is not a definitive Top Ten of the Year list; more like a roundup of films that, whether for lush visuals, assaultive audio, or powerful performances, deserved to be seen by the glow of the big screen. Here are my top ten horror films that I wish I could have seen in a theater under safe conditions:

10. Anything For Jackson gets it; when you want to make a horror-comedy that works consistently throughout the runtime, simply lean into the organic absurdities of any horrific situation the protagonists encounter. Justin G. Dyck’s feature has plenty of freaky fodder; in it, an elderly couple kidnap a pregnant woman to be used as a vessel for their dead grandson’s spirit, using an ancient Satanic spell book. As a straightforward horror picture, it would be routine and well-trodden. But by imagining how a pair of clueless grandparents would navigate the circumstances, hilarity ensues with everything from tech trouble with their victim’s phone to mispronouncing the Latin in the spell book.

9. It’s a real shame that Come True came out amid a pandemic; Julia Sara Stone should be a star at this very moment. Stone’s character Sarah, a dazed but headstrong runaway teen, navigates a dream world that is so thoroughly unnerving and delicately mapped that it can only come from the mind of a singular visionary. When Sarah takes part in a sleep study, she becomes ensnared by her own bottomless mind and every malevolence lurking within. Director Anthony Scott Burns is no stranger to harrowing surrealism; his “Father’s Day” segment in the horror anthology Holidays taps into a similar landscape that mimics the feeling of gliding through a dream that threatens to turn sour at any moment. With the aid of an ethereal synth score composed by Burns himself, Come True is a cold pilgrimage through the depths of the subconscious.

8. The next two entries are technically cheating since they are specific to two major streaming sites, but it’s my list and I can do what I want. First, Bad Hair is the kind of satire that is not only done right in its indictment of the warped beauty standards Black American women are held to, but deserves to be enjoyed with a crowd. Writer-director Justin Simien wears his love for J-horror on his sleeve and on the screen; the plot, of a young production assistant hungry to move up in the image-centric LA television industry getting a new weave that kills people, has clear influences in Japanese genre cinema. But what keeps it from becoming another bad Yankee mimic is that Simien infuses that J-horror imagery (the wide-eyed screaming lady with long, crawling strands), with culture specific to the Black American woman experience. From an excruciating braiding scene to a relaxer treatment gone bad to the near-apocalyptic climax, sound design works overtime to immerse the viewer and the result is a crisp, fresh commentary on the Black woman’s relationship with her hair, whether “good hair” or “bad hair.”

7. His House is a Netflix pickup out of Sundance, and Remi Weekes’ stab at the time-honored haunting structure breathes new life into a time-honored subgenre. Following a successful but tragic escape from their home in war-weary South Sudan, a refugee couple’s efforts to adjust to their new life in a small English town meet with a sinister evil within their very walls. To quote my AV Club review, “what follows is a potent, heart-wrenching spin on the classic haunted house story, buoyed by two stellar lead performances.” Stellar cinematography by Jo Willems ensures that the magnificent lead players, Sope Dìrísù and Wunmi Mosaku are not lost to hokey nighttime shadowplay, instead opting to team up with Weekes and compose striking shots that further emphasize the performances, which are the heart and soul of a movie that threatens to snatch them away.

6. The Queen of Black Magic previously played at a few digital festivals this year, including Fantastic Fest and Nightstream, and no film made me miss the in-house festival experience more than this one. Helmed by one half of the Mo Brothers filmmaking duo, The Queen of Black Magic is a remake of the 1981 Indonesian balls-to-the-wall horror film of the same name, with Impetigore director Joko Anwar penning the script and Kimo Stamboel directing the story of a reunion at an orphanage gone horribly wrong. Once it pops off, Anwar and Stamboel cram as much bloody pandemonium as possible into a crisp 99-minute runtime. Flayed skin, eye gouging, and bug infestation are only the tip of the iceberg in this immaculate Raimi-esque blend of Asian horror and French Extremity.

5. The Wolf of Snow Hollow did get a limited theatrical release and a same-day VOD release, but again—my list, I do what I want. Writer-director Jim Cummings told the Salt Lake Tribune that Robert Forster joined the production (his final role) because, at its heart,  the creature feature is “just a dramatic movie about a father-son relationship, and complications of aging and health.” Cummings walks a fine line between horror and comedy with his tale of a terrified mountain town at the mercy of a possible lycanthrope, with Officer Marshall (Cummings) trying to maintain sanity, order, and personal relationships. Full of sensational makeup effects, sharp dialogue, and A-game performances, The Wolf of Snow Hollow is indie horror filmmaking at its most effective.

4. I never got to see a Bava film in the theater, but The Nest (Il Nido) might be the closest modern iteration of his Italian Gothic sentiment. A claustrophobic tale set in an isolated mansion, Robert Do Feo’s feature debut observes the slow unraveling of a young paraplegic boy trapped with his overbearing mother and a maid who exposes the family tea. The dread is pervasive, simmering in the threat of something bad happening as tautly as any Robert Eggers picture. Immaculately shot and dripping with atmosphere, The Nest is the rebirth of a genre that’s long been aching to make a comeback.

3. Reunion is a film you should go into as blind as possible, so I won’t say much about it. But Jake Mahaffy’s feature is an intimate family melodrama that takes hard left turns, and I desperately want to know what kind of confused brays the crowd would have uttered at each revelation. Between its cluttered, ornate interiors, its clear love for the natural Tarkovsky aesthetic, and cinematography that never met a Dutch angle it didn’t like, there’s plenty of visual stimulation to compete with the intentionally-bewildering plot. Add in a mother-daughter dynamic that recalls a 60s Hagsploitation joint and you have a film that embodies the midnight movie spirit more than any other movie this year.

2. Sometimes, it’s better to get your heart cleaved in twain with company than it is alone. Natalie Erika James’ feature debut Relic cuts deep in its quiet consideration of three generations of women in their family home as they battle a monstrous embodiment of dementia. While Larry Van Duynhoven’s creature design is phenomenal, the true source of horror is captured in the triple-threat performances of Robyn Nevin, Emily Mortimer, and Bella Heathcote: witnessing the slow decline of a loved one as they lose their grip on reality—and knowing that you are next.

1. Something is in the air this year (besides a debilitating virus); both Relic and Amulet touch upon the anxiety surrounding a loss—whether physical or mental—of a parent. Writer-director Bryan Bertino (of The Strangers fame) adds another iteration to the mix with The Dark and the Wicked. Steadily building suspense hand-in-hand with an unsettling grim outlook, Bertino crafts a dread-filled story that follows two estranged siblings as they return to their family farm to say their final goodbyes to their father. For those who miss the collective rise of moans in the theater as something sinister is slowly revealed, this film has plenty of beats to groove to (or cower from).

With gems like these, 2020 can’t even be called a slow year for the genre. Here’s hoping that 2021 brings back the communal theater experience for us all; the moans of revulsion, the howls of disgusted laughter, and the screams of fear– but let’s keep it on the big screen and not in real life, yes?