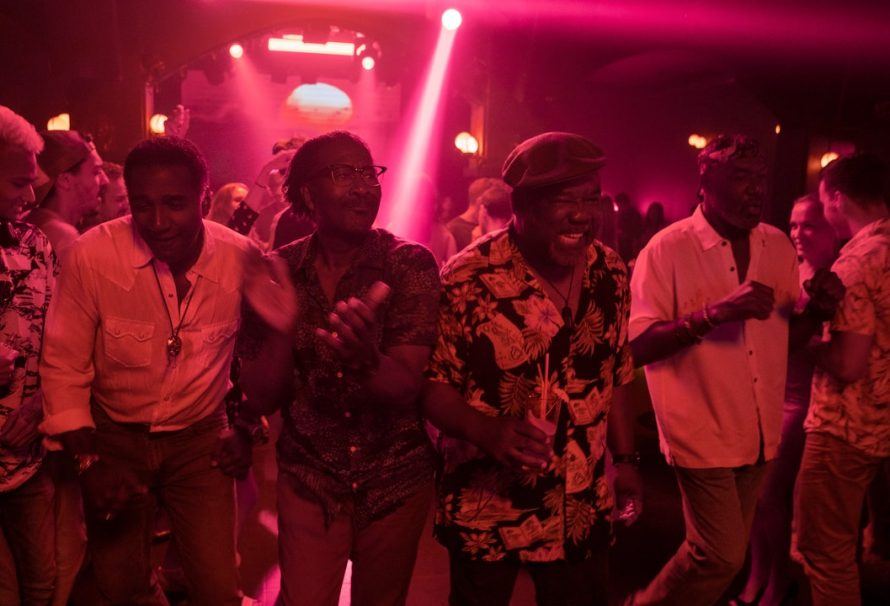 2020 sucked. I’m sorry to be that blunt, but the year is almost over, we’re all fairly burnt-out, shit is still incredibly rough out there, and all I want to do is crawl under a blanket and think about the things this year that were hot enough or clever enough or just goddamn enjoyable enough to break me out of my ever-present funk. And thankfully, there was a lot of it!

On the one hand, there were a lot of beautiful, insightful, emotionally heavy movies that came out in 2020 that I strongly encourage you to seek out: Nomadland, First Cow, One Night in Miami…, Sound of Metal, The Assistant, Never Rarely Sometimes Always. But there are also a fair amount of movies this year that might not have been the best, but that offered entertainment and reassurance and just flat-out delight.

These are some of the cinematic moments that made me happiest this year, and I hope they bring you joy, too.

THE GENTLEMEN
Look, The Gentlemen is an awful movie. Guy Ritchie mimicking all his previous tricks in a film that is barely anything more than dreadful Orientalist schlock. But uh, Charlie Hunnam looked like this in that movie. And, well. That I cannot ignore!

Did his goatee need a little trim? Sure. Couldn’t have hurt; this was a little too late-season Sons of Anarchy for my liking.

If we couldn’t get Hunnam in that Pacific Rim sequel, though, I guess I’ll take this.

BIRDS OF PREY (AND THE FANTABULOUS EMANCIPATION OF ONE HARLEY QUINN)
Have you considered that if you didn’t like Birds of Prey, you might be a misogynist? I kid, I kid. I understand that people have different tastes or whatever. But Birds of Prey was a rollicking good time that understood something central about the DC Universe: That dude-bro misery isn’t the only emotion around, and that sometimes punching one of those very dude-bros in the face is quite satisfying indeed.

The Birds of Prey carnival fight is a feast of thirsty delights, and if you didn’t get a little jazzed by that team-up, well. Huntress will sort you out.

Bonus Victor Zsasz for all you weirdos.

THE PHOTOGRAPH
I was mostly underwhelmed by The Photograph, which follows two couples at different time periods; the bifurcated approach doesn’t give either romantic pairing enough attention. But the way Lakeith Stanfield looks at Issa Rae? Yes, please, why are pants?

EMMA.
It’s the hands for me.

FIRST COW
It’s the clafoutis for me.

But this movie: bad.

… But as perfect of a vibe as the dancing scene in Da 5 Bloods? DOUBTFUL.

WASP NETWORK
A reminder that Édgar Ramírez is not only very hot but also a very, very good actor.

EUROVISION SONG CONTEST: THE STORY OF FIRE SAGA
Why is Rachel McAdams so perfect, like, all the time? I do not understand it. BUT I APPRECIATE IT.

IRRESISTIBLE
The only relatable thing about this movie when was when Steve Carrell showed an entire blueberry pastry in his mouth and nearly had an orgasm from the sheer carb-laden America of it. But I can’t find a gif of that moment, so here, have Rose Byrne licking his face instead. IF YOU’RE INTO THAT SORT OF THING.

THE OLD GUARD
Yes, Joe’s declaration of love for Nicky was incredibly passionate and lovely.

You know what else was hot, though? Every other goddamn thing Marwan Kenzari did in this movie. YOWZA.

But especially spitting out bullets.

TENET
All I understood about Tenet was that Christopher Nolan outfits all his male characters like they are retired bocce players just hanging out with the boys, and that look PARTICULARLY benefits Himesh Patel. Yowza.

PERSONAL HISTORY OF DAVID COPPERFIELD
DEV PATEL AS BOND, WHEN??? Look at this grimy hair flip! My man has range!

THE BROKEN HEARTS GALLERY
Karaoke rom-com scenes? The familiar goofiness I needed to keep me going in 2020!

ON THE ROCKS
Sofia Coppola’s latest has been growing on me since I first watched it, and that’s because the connection between Rashida Jones and Bill Murray is so perfect. His very extra New Yorker-ness, and the way he’s able to leverage all his privilege as a white man to get whatever he wants—even out of a speeding ticket. Her very wary reaction to all his affectations, even as she admittedly still loves and wants to spend time with him. There’s a real oppositional dynamic here that works and provides most of the film’s emotional catharsis, and I’m not sure any other two actors could have captured it better.

VAMPIRES VS. THE BRONX
Can Method Man be in more refreshingly silly coming-of-age comedic horror movies, please? I think my man found his niche!

FREAKY
No, Christopher Landon’s body-switch horror-comedy Freaky wasn’t as transgressive as it liked to think. But the amount of very clear fun Vince Vaughn and Kathryn Newton are having as a teenager stuck in a serial killer’s body, and vice versa? It was infectious!

HAPPIEST SEASON
There was no other way this list could have wrapped, honestly. May Aubrey Plaza portend better things for us all come 2021.

A Degree of Madness: The Rise of the Crazed University Student