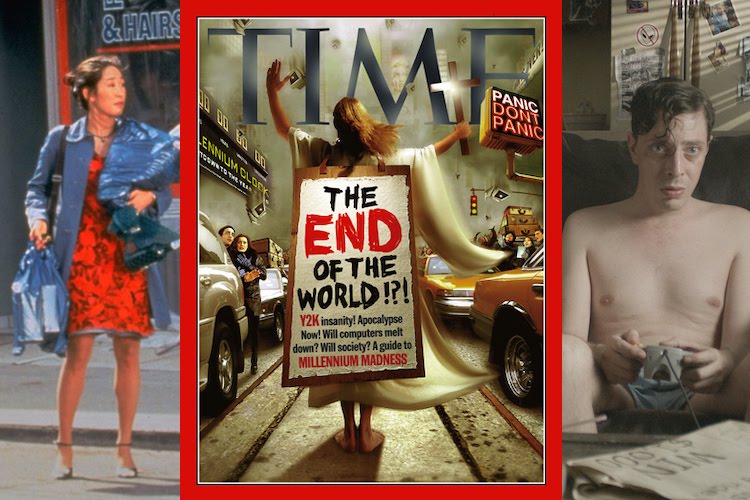 We knew on Jan. 1, 2000, that the hysteria surrounding Y2K had been overblown. But before that, the fears that the so-called “Millennium Bug” would cause computers to cease working (or, at the very least, display the wrong date) had engendered a hundred-billion-dollar cottage industry of emergency patches and software upgrades to mitigate a problem caused by shortsighted programmers back in the punch-card days who tried to save money on data storage by only using two digits for the year. Nobody knew what would happen when 99 rolled over to 00. Would financial institutions think it was 1900? Would the grid go down? Would the gas stop flowing?

With anxieties running high, filmmakers responded by staging end-of-the-world scenarios on a multitude of scales in the years leading up to the (non-)event. Most were large-scale disaster movies — Dante’s Peak and Volcano (both 1997), Armageddon and Deep Impact (both 1998), for example — but these were soon chased by the more measured Last Night, a ground-level look at a cross-section of Torontonians preparing for the end of the world and, being Canadian, not being so bombastic about it.

Originally intended to be part of the “2000 Seen by…” film series (alongside such other apocalypse-minded entries as Hal Hartley’s The Book of Life and Tsai Ming-liang’s The Hole), Last Night was instead fashioned into a standalone feature by writer/director/star Don McKellar, who saw the opportunity to craft an ensemble drama with his own character, architect Patrick Wheeler, as the link between all the others.

In fact, Patrick’s voice is the first one heard in the film, albeit on his answering machine (remember those?) when he receives a message from a gas company flack (played by David Cronenberg) thanking him for being a loyal customer and assuring him Petrolia “will do our utmost to keep the gas flowing right until the end.” Also “with you until the end” is the radio DJ counting down the top 500 songs of all time, a countdown heavy on ’70s soft-rock hits that is due to reach its conclusion at the stroke of midnight, when an unspecified cataclysm will be bringing about the end of the world as everyone knows it. In the six hours until that comes to pass, though, there’s plenty of time for people to come together, sometimes in the most literal sense.

Patrick’s first stop is a family dinner that his high-strung mother has turned into an ersatz Christmas celebration complete with presents – and all the heightened emotions such gatherings bring. (His sister, incidentally, is played by Sarah Polley, who would join McKellar in the cast of Cronenberg’s cyberthriller eXistenZ the following year.) Patrick has promised to stay for a few hours, but his ultimate plan is to be home alone when the end comes, for reasons that aren’t made clear until time is nearly up.

Waiting until the last minute to take care of business is a running theme, since the film also introduces a woman named Sandra (Sandra Oh) who is out by herself picking up some essentials before heading home to carry out the suicide pact she’s made with her husband. She’s prevented from doing that, though, by a band of hell-raisers that descends upon her car and tips it over while she’s picking out a bottle of wine.

As for Sandra’s husband, Duncan, he’s eventually revealed to be Cronenberg’s gas company man, who’s staying at the office until he’s personally called every last customer in their database. Besides him, the only employee in the building is his mousy assistant Donna (Tracy Wright), who is manning the lone computer terminal needed to monitor the gas flow. While Duncan is able to make it to their well-appointed home without incident, Sandra finds public transportation isn’t running and is despondently camped out on Patrick’s front step when he arrives at his door. With time running short, finding her a safe ride across town becomes his main goal, but his inability to hotwire a car is as comical as it is unhelpful.

The last major character to be introduced (and one of the last Duncan leaves a message for) is Craig Zwiller (Callum Keith Rennie, another eXistenZ vet), who is spending his final hours racking up as many sexual conquests as possible, unapologetically checking off items on his kink bucket list as he goes. “I just wanted to have an orgasm today,” says one of his prospective partners. “I’ll do my best,” Craig replies. Later on, he plays host to his high school French teacher, Mrs. Carlton (Genevieve Bujold), and even propositions Patrick when he shows up with Sandra in tow in the hopes of borrowing one of Craig’s cars. Even as Craig reluctantly agrees to let one of them go, Patrick demurs, explaining that he doesn’t want to risk having bad sex. “I just don’t want that to be the last thing on my mind.”

As midnight draws near, things come to a head for each of the characters, and the social order – already a fragile thing – rapidly crumbles. The scene where Duncan meets his premature end at the hands of a shotgun-wielding intruder is especially chilling thanks to Cronenberg’s utterly calm delivery of his last words. (“I’m not afraid of you,” he says. “I’m not afraid of what you can do. You’re the one who’s afraid.”) Still, there are moments of unexpected grace, such as the piano recital one of Patrick and Craig’s mutual acquaintances gives at Petrolia Hall. McKellar could have gone for an easy joke or cringe comedy by making it a train wreck, but the guy is genuinely talented. It’s just a shame it took the world coming to an end for him to be able to demonstrate this in the proper setting.

A similar dynamic is at work in writer/director/editor Joel Potrykus’s Relaxer, which was made in 2018 but set in the latter half of 1999, when Y2K hysteria was reaching a fever pitch. Where Last Night bops around Toronto along with its disparate characters, Relaxer stays rooted in a single location, the Belmont, Mich., apartment where unemployed protagonist Abbie (Joshua Burge) is crashing with his brother Cam (David Dastmalchian). In a more extreme version of Don McKellar’s quirky 1998 CBC comedy series Twitch City, which was about an agoraphobe who has arranged his life so he never has to leave his apartment, Abbie can’t even get off the couch lest he fail one of Cam’s punishing “challenges.” The first of these (which Abbie fails in spectacularly humiliating fashion) is to drink a whole gallon of milk, during which he attempts to recreate a glitch in an unbeatable skateboarding video game – all the while being filmed by Cam’s ever-present Hi8 camera. It’s not long, however, before the “final, ultimate challenge” is issued: beating the legendary level 256 of Pac-Man, which Cam generously gives him until New Year’s Eve to accomplish.

True to his word, Abbie remains glued to the couch after Cam leaves, going to extreme lengths to obtain sustenance using the tools he has within reach. (At one point, even the camera tripod gets pressed into service.) Over the course of an increasingly surreal day (or days), Abbie is visited by a friend who fails to bring him the Chuck E. Cheese pizza he asked for and withholds the soda he bought because Abbie has no money, the building’s janitors set off a bug bomb in the apartment, and a former co-worker drops by to check in on him and share the secret to beating the game. “How long have you been sitting there?” she asks him, to which he responds, “What day is it?” (Turns out it’s sometime in July.)

Such confusion is part and parcel of Potrykus’s campaign of ambiguity, which extends to the strange powers Abbie apparently begins manifesting whenever he dons the pair of 3D sunglasses he has on hand – a gift from his absent father. Of course, they could also be hallucinations brought on by the mental exhaustion and severe dehydration he experiences until he manages to expose the pipes in the wall, a moment straight out of The Exterminating Angel where Potrykus one-ups Buñuel by having Abbie mistakenly tap into the sewer line first. Suffice it to say, the Abbie who’s on the verge of beating Pac-Man five months later while fireworks are being set off outside and the crowds are counting down the seconds to midnight looks very much the worse for wear, but at least he’s gained some survival skills along the way. Those will definitely come in handy when the doomsayers are eventually proved right.