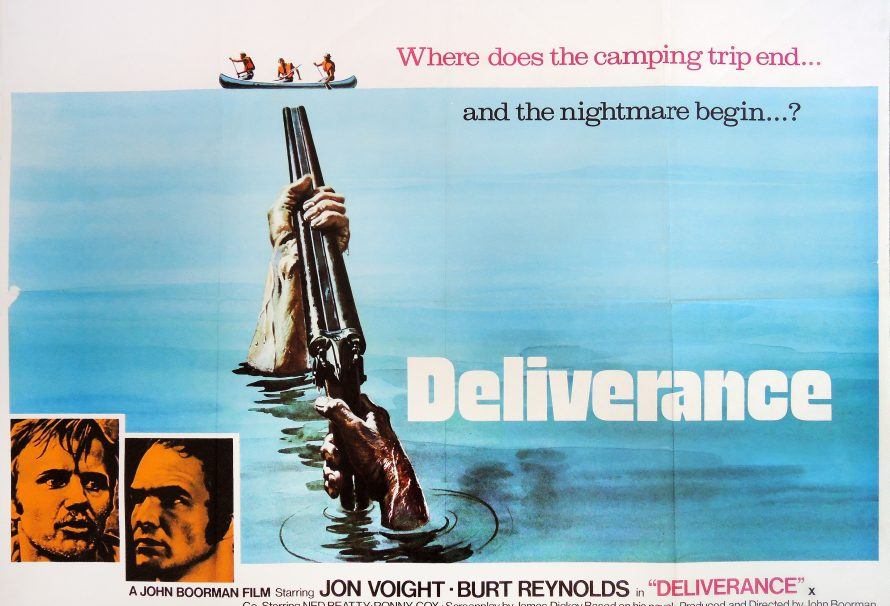 The rape-revenge strain of thrillers isn’t relegated only to Ms. 45s spitting on graves near the last house on the left. Mainstream works like Sam Peckinpah’s Straw Dogs give it the highbrow treatment while looking at toxic masculinity under the microscope, and Jonathan Kaplan’s The Accused (1988) moves the tensions to the courtroom, where justice threatens to evade yet another sexual assault survivor.

American revenge stories of the ‘70s in particular enjoy a reflexive zeal in their upending of the binary Hollywood moral code. The old Hays way of telling stories required evil to be punished no matter what (a rule directly responsible for the war crime that was The Bad Seed’s ending), but with the dismantling of the old edicts and the introduction of a voluntary Motion Picture Association rating system, change was a-comin’ to the big screen. Some films, like Robert Aldrich’s grit-and-grime war movie The Dirty Dozen, anticipated these censorship evolutions and amped up the violence accordingly, but one film to reap the benefits of looser censorship rules was John Boorman’s 1972 backwoods thriller Deliverance.

The film is stacked with talent, above and below the line. Director Boorman’s “virtuosity” was described as the true star of his first Hollywood project, 1967 Lee Marvin vehicle Point Blank (also a revenge thriller, though more enigmatic). That film was slightly ahead of the American curve, showcasing the influences of the French New Wave in its fragmenting of time and, coupled with Boorman’s 1965 debut feature Catch Us If You Can, a reactionary (almost anti-pop) Dave Clark Five riff on A Hard Day’s Night, his work displays a frank determination to explore the bits and bobs of genre that had gone untouched. Thus, an adaptation of a boys’ trip story in which one is raped over a tree log is a fitting marriage. Boorman had just come off a harrowing production of Hell in the Pacific (collaborating with Lee Marvin again) but pulled it off well enough that Warner Bros. gave him the reins to adapt Dickey’s novel.

The leads are a quartet of then-unknowns repping the new school of Hollywood; no studio-era actors to be found. Ned Beatty, a Kentucky native who began in theater, would go on to become a chameleon character actor, changing flaws and demeanors from film to film, playing a feckless hitman in Elaine May’s ’76 singular gangster picture Mikey and Nicky and earning an Oscar nom for an arresting spotlighted three-minute speech in Sidney Lumet’s Network the very same year (he would lose to his All the President’s Men co-star Jason Robards). Jon Voight was a slightly familiar face of counterculture by this time, making a splash in the X-rated Midnight Cowboy alongside Dustin Hoffman in 1967, while Deliverance marked Ronny Cox’s feature debut. And despite a television run throughout the sixties and a couple of roles in features, America’s most-known unknown Burt Reynolds’ casting in Deliverance led to his breakthrough role as Lewis Medlock.

Boorman tells the story of a quartet of city slickers embarking on a canoe trip along Georgia’s fictional Cahulawassee River. What starts out as a rejuvenating, nature-filled weekend quickly descends into a dire fight to make it out alive. After a violent confrontation with locals, the four men are forever changed as they weather the rough environment to survive.

While Bobby Trippe (Ned Beatty), Lewis Medlock (Burt Reynolds), Ed Gentry (Jon Voight), and Drew Ballinger (Ronny Cox) share a collective unreadiness for the brutality of the river and the area surrounding it, the main players on the Deliverance stage are distinct, with varying motivations for embarking on the trip and varying reactions to what would befall them in the movie’s 109-minute runtime. As the man who arranged the trip, Lewis is in it for the thrill, which he playfully refers to as “the game.” Early on Ed asks him why they want to conquer the river, Lewis replies, “Because it’s there.” The bravado is tempered; Lewis warns his companions of the river’s dangers but delivered with the broad-shouldered Hemingway machismo that Reynolds came to be known for throughout the 70s. Lewis doesn’t trust civilized society, and doesn’t have much tethering him to it. Others, like Drew, have families and jobs waiting for them upon return.

The trip begins well enough, though, like any horror film, urban excursions into the country rarely end well. They interact with the locals, who are Othered as inbred yokels (until they become inbred monsters); Drew engages in a now-classic jam session with a boy, Lonnie (Billy Redden), in which they play a rousing “Dueling Banjos.” But when he tries to shake Lonnie’s hand afterward, the boy turns away, laying the groundwork for further city-country tension. The Georgians’ shabby clothes and sun-baked belongings strike a sharp contrast with the crisp, expensive gear and just-peeled-the-sticker-off breathable fabrics. Boorman and Dickey make it a point to mention that the river will soon be dammed by “the power company,” underlining the exploitative nature of civilized society. It’s no wonder the locals are touchy; every time “the city” encroaches on their land, another part of the wilderness is tamed and commodified. Over the opening credits, Lewis draws the parallel, “You push a little more power into Atlanta, a little more air conditioners for your smug little suburb, and you know what’s going to happen? We’re gonna rape this whole goddamn landscape.” His friends call him an extremist, but the sentiment foreshadows the eye-for-an-eye dynamic between the fellas and their foes, between the urban and the rural. And so, when Lewis, Ed, Drew, and Bobby roll up cracking jokes and acting like they own the place, the northern Georgia folk return invasion for invasion— by raping one of them.

Then the infamous moment comes. The two mountain men appear quietly and almost walk right on top of the group. Before the man with teeth (Bill McKinney) utters a syllable, his presence alone ratchets up the tension—real slow, predator-like. While the rape scene is the one that everyone loves to talk about, one source of Deliverance’s power is in watching each of the four come to the slow realization that he is out of his element. Even as the mountain men descend upon the group, Bobby chuckles and delivers more condescending wit until one of the men strokes his cheek. It’s here that Beatty broadcasts his growing discomfort through a series of strained tells: a grin weakened to a grimace, a casual don’t-let-them-know-you’re-sweating recoil. The jokes quickly stop and jaws clench as the men brandish a shotgun and menacing Bowie knife. McKinney’s grinning country man entreats Bobby to take his clothes and “panties” off, feminizing him. The shame and hopelessness of the display comes home on the face of its helpless observer Ed. Voight’s brow furrows and his gaze rests, rather than pierces, his violated companion before the toothless man (Herbert Coward) turns his gaze towards him, commenting on how “pretty” his mouth is. One could say that the ordeal ends when Lewis puts an arrow through one of the men and Drew chases the other off, but it’s only catalyzed the ordeal to come as they battle the surviving assailant and struggle to stay afloat enroute to safety.

The score is sparse due to budget constraints, opting instead to let the land and water swallow the men sonically as well as visually. On the river, their voices compete with the whitewash. By the time the dueling banjos come strolling back into the space, it’s slow and taunting version of the lively rendition plunked by Drew and his accompanist earlier. Now, thirty screen minutes later, with two of the men wounded, another sexually violated, and another’s mangled body curled into half-submerged branch, the banjo notes almost taunt the city boys: is this the connection to nature that you wanted? Did you get your rejuvenating experience?

In an interview with The Guardian, Boorman sums up how his movie defied expectations. “All the Warner execs walked out without a word at the first screening. They said: ‘There’s never been a film in the history of Hollywood without women in it that made a lot of money.’ But it made $46 million, the number five film that year.” Both “Dueling Banjos” and the phrase “Squeal like a pig!” are firmly entrenched in the American pop culture vocabulary, and just as Jaws made people think twice about going into the water, Deliverance prompts us all to pack some cold steel for future camping trips.

Anya Stanley is a film critic, author, and a columnist at 'Fangoria' Magazine. Her chapter on the irreligious work of H.P. Lovecraft was published last year in 'Scared Sacred: Idolatry, Religion, and Worship in the Horror Film' by House of Leaves Publishing. Further work can be found at her website www.anyawrites.com and @BookishPlinko on Twitter.