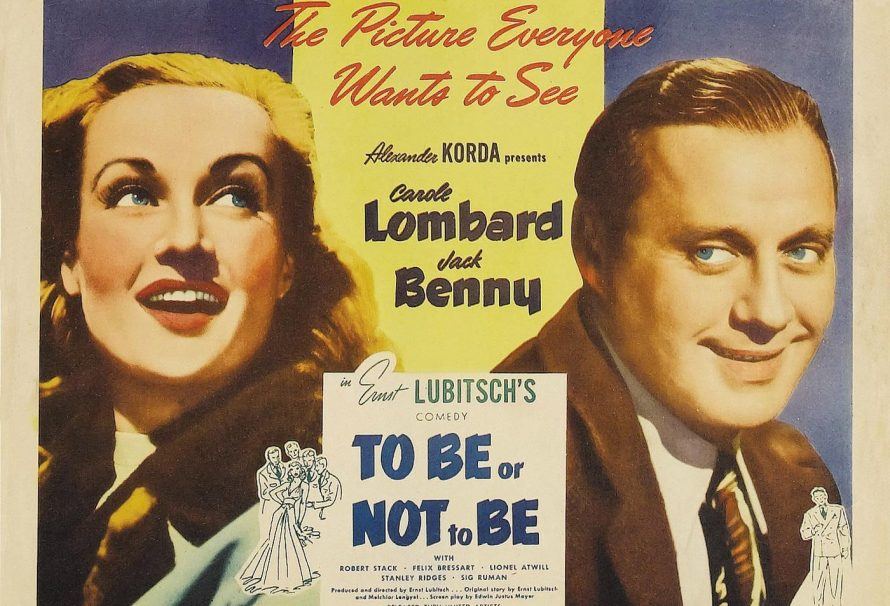 Now playing in the Criterion Channel’s September program, To Be or Not To Be (1942) sits squarely in the center of its historical context, where Golden Age Hollywood cinema and World War II intersected. It was directed by German Jewish emigré Ernst Lubitsch, then at the height of his powers and happy to aim them directly at the Nazis. It features the final role of Carole Lombard, then the reigning queen of screwball comedy and one-half of an iconic Hollywood power couple with Clark Gable (after filming, Lombard died in a plane crash on her way home from selling war bonds in Indiana). Playing opposite her is Jack Benny, then the reigning king of radio comedy, in what many critics regard as his best ever big-screen performance. The below-the-line crew is likewise a who’s-who of studio-system filmmaking: the mononymous “Irene” designed Lombard’s luxe gowns; Alexander Korda’s brother Vincent designed the sets; Dorothy Spencer cut the film, in this era in which film editing was female-dominated. And the seasoned cinematographer Rudolph Maté, an Eastern European Jewish emigré himself, deftly navigated the film’s complicated tonal shifts between anti-Nazi spy thriller and comedy. These shifts were as tricky—and controversial—as they sound, especially in the film’s contemporary moment, when the threat of Nazism was most dire, and thus no laughing matter to many.

For all these reasons, cinephiles and filmmakers (and cinephilic filmmakers) revere Lubitsch’s To Be or Not to Be, including Mel Brooks, who faithfully remade it in 1983, and Quentin Tarantino, who paid it loving homage in Inglourious Basterds in 2009—long (and longer) after the threat of the Third Reich had passed, though the controversial nature of satirizing it had not.  (See also Roberto Begnini’s Life is Beautiful [1997] and Taika Waititi’s JoJo Rabbit [2019].)

With an ominous voiceover narration, To Be or Not to Be opens on the streets of Warsaw, August 1939, on the eve of Nazi occupation. Adolph Hitler and his minions terrorize the Polish people from newly erected Gestapo headquarters. But, wait. Five minutes in, Lubitsch lets us in on the joke: this is not really Hitler and his henchmen, but the Theatr Polski’s acting troupe rehearsing their latest production, “The Gestapo,” on a stage set. All is not as it seems to be, as the film’s title comes to mean—a deadly serious line borrowed from Shakespeare’s Hamlet and made into a running gag.

This first revelation that appearances deceive comes as theater director Jan Dobosz (Charles Halton) interrupts his players to lambast them for hamming it up, particularly after the actor playing Hitler, Bronski (Tom Dugan) improvises a zinger, “Heil myself!” Dobosz fumes: “I want everybody to understand this! This is a serious play! A realistic drama! A document of Nazi Germany!” At this point, the troupe’s grand diva Maria Tura (Lombard) waltzes on stage draped in a gleamingly-white satin dress, studded in diamonds and hemmed in fur. Dobosz is shocked. “Is that what you’re going to wear in the concentration camp?,” he asks.

“Well, why not?,” Lombard-as-Maria deadpans, “I think it’s a tremendous contrast. Think of me being flogged in the darkness. I scream. Suddenly the lights go on, and the audience discovers me in this gorgeous dress!” Troupe member Greenberg (Felix Bressart) agrees: “That’s a terrific laugh,” he enthuses, much to director Dobosz’s consternation. When troupe headliner Josef Tura (Benny), Maria’s husband and her equal-in-ego, agrees with Dobosz that “the dress stinks,” Maria accuses him of professional jealousy (afraid she’s stealing his spotlight), and we’re off into the Lubitschian territory of marital power dynamics, witty banter, and sexual innuendo.

Pay attention; Lubitsch is a master, and he moves fast. The economy of this metadramatic minute and a half of filmmaking is remarkable. The film’s main characters, who are stage actors, are introduced with great efficiency, capitalizing on the audiences’ extradiegetic familiarity with its film actors: with Benny’s radio persona (hilariously vain and petty) and Lombard’s reputation as fashion-obsessed. Genre is announced, and subverted: To Be or Not to Be will be an anti-Nazi drama, interrupted by comedy. And, Lubitsch is insisting, this genre mash-up is highly intentional. He is  asserting himself as Dobosz’ antithesis, a director with a sense of humor and total control: of the laughs, his actors, and the high-wire act itself of satirizing Nazism—already proven plenty controversial in Charlie Chaplin’s The Great Dictator (1940). Thus, the scene anticipates criticisms that To Be or Not to Be is in bad taste and “callous” (Bosley Crowther), because it contains the “unreconcilable modes” of comedy and anti-Nazism (The Times of London), and maybe even aids Nazism by treating it lightly. The Philadelphia Inquirer’s critic went so far as to suggest, absurdly, that Lubitsch might be a Nazi sympathizer.

On the contrary, Lubitsch will go on to argue in the film’s cycle of Nazi fakes play-acting at—and making a mockery of—Nazism is a powerful means to deflate and defeat it. It undermines Riefenstahlian triumphalism by underscoring that Nazis themselves are only pretending to be supermen. Hitler, as the aforementioned opening scene argues, is “just a man with a little mustache.”

To Be or Not to Be’s plot is complicated, but here’s the gist: Forced by Nazi command to cancel “The Gestapo,” the Teatr Polski puts up Hamlet instead. Knowing her husband-as-Hamlet will chew up the “To be or not to be”soliloquy for a good ten minutes, Maria invites a handsome admirer—a pilot named Stanislav Sobinski (a baby-faced Robert Stack)—to her dressing room each night as Josef launches into it. There, the young flier lets fly the un-subtlest of innuendo, in which his bomber is a powerful phallus, and Maria swoons. But their consummation—and the Code-defying “Lubitsch touch”—is cut off by the real Nazi invasion. Lieutenant Sobinski reports to the RAF in London, and thus launches the film’s spy thriller elements. There, Sobinski detects the machinations of Professor Selitzky, a Nazi collaborator posing as a star of the Polish resistance. To stop Selitzky from delivering a list of Polish resistors to the Gestapo, Sobinski parachutes back into Warsaw and enlists the help of the Teatr Polksi troupe, thus dropping the film back into its comedy-of-errors elements.

To contribute to the cause, Maria puts on her ‘concentration camp’ dress and a grand performance in the Nazi-occupied Hotel Europejski in order to seduce Selitzky, feigning openness to his sexual advances and to Nazism. Selitzky lures, “Shall we drink to a blitzkrieg,” and Maria purrs, “No, I prefer a slow encirclement,” followed by an orgasmic exclamation of “Heil Hitler” (the film ever spoofing the Nazi salute).  Mid-seduction, Selitzky is called to Gestapo headquarters by its chief, Colonel Erhardt. But, wait, this is another fake, again the theater troupe pretending (and Tura refusing to be upstaged by Maria). With “The Gestapo” sets and costumes, and Tura headlining as Erhardt, they put on a convincing show, briefly. But when Josef’s bad acting gives them away, Selitzky tries to run, is shot, and dies dramatically on stage.

Two acts remain. The next has Josef impersonating Selitzky to meet the real Col. Erhardt, a Nazi every bit as buffoonish as Josef’s (previous) imitation; and has Maria pretending to be Hitler’s lover. The final act is the biggest of all, with the entire troupe at the occupied Teatr Polski, this time with the real Hitler in attendance, along with a swastika-draped auditorium full of Nazi officers. (Did I mention Tarantino’s homage in Inglourious Basterds?) Playing himself as the Polish patriot and Shakespearean humanist he is in reality, Greenberg distracts Hitler’s guard, and allows Bronski-as-Hitler, Benny-as-Earhardt, and the troupe-as-stormtroopers to usher them away, pretending to have foiled the underground plot they are in fact enacting. They have played at being Nazis in order to be effective anti-Nazi resistors.

Lubitsch makes a good argument for the subversive power of humor; “A laugh is nothing to sneeze at,” Greenberg insists in that opening scene. Still, some of the contemporaneously controversial lines of dialogue still elicit a cringe, still taste pretty bad. For instance, Josef-as-Erhardt, doing his best to imitate Gestapo heartlessness, laughs with Selitzky about concentration camps and jokes, “We do the concentrating; the Poles do the camping.” And the real Erhardt criticizes Josef’s acting skills to (Josef-as-)Selitzky, quipping, “What he did to Shakespeare, we are doing now to Poland.” Though meant to satirize Nazism, both lines come dangerously close to making a joke of human slaughter.

Whether or not to excuse such lines might affect a casual film fan’s decision as to whether ‘To Watch or Not to Watch’ Lubitsch’s masterpiece. But anyone seriously interested in Hollywood history can save themselves the existential waffling: To Be or Not to Be is required viewing.

“To Be or Not to Be” is now streaming on the Criterion Channel.

The Sum of All Fears: The Forgotten Post-9/11 Jack Ryan Movie