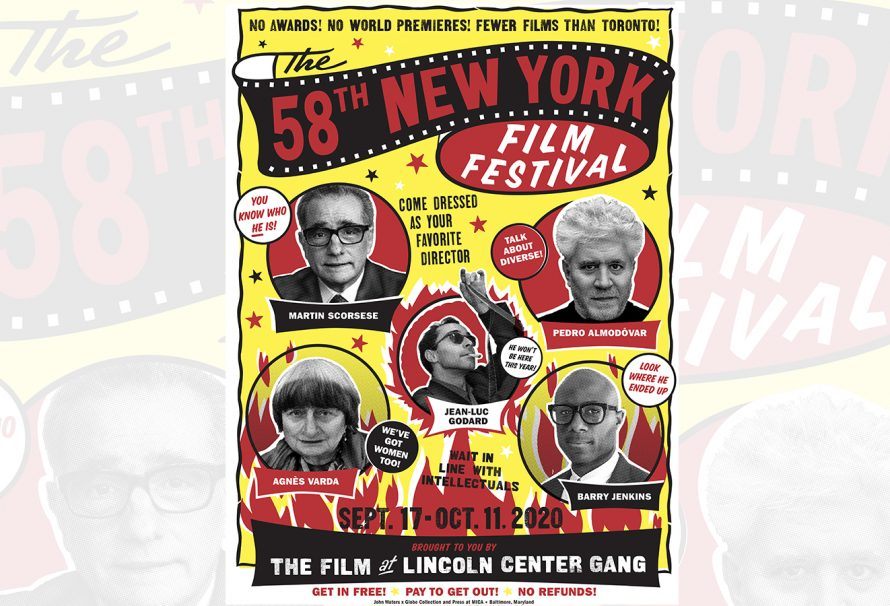 With two fall festivals down, I have this to say about covering “virtual film festivals”: I do not like it one bit. I am, of course, lucky to even be accredited (many deserving folks were not), and lucky to even do this for a living, etc. etc. But the fact of the matter, as Monica Castillo detailed in her TIFF diary, is that you simply can’t cover a film festival from home with anything resembling focus or immersion – there are distractions at home, of course, but more importantly, there’s a sense of discovery that’s simply impossible to recreate under these circumstances.

When you’re at a film festival, you see things because that’s what you’re there to do; when you’re covering a film festival from home, there are all these other things – work and family and life  – to do as well. And thus you never find yourself with a three-hour hole to fill between something you’ve been assigned and something buzzy, and end up stumbling into something that blows your mind. I suppose it’s possible for this to happen in a virtual setting. It just didn’t happen for me.

Nevertheless! I took in as many films as I could at this year’s New York Film Festival, which offered up plenty of fine titles – new and old – and came up with some pretty inventive ways to screen them as well.

“Are you still doin’ the van thing?” her sister asks. “Come and stay with us, we’re worried about you.” But Fern (Frances McDormand), the woman at the center of Chloé Zhao’s Nomadland, doesn’t want them to worry  – “I like work,” she insists, and Fern and the other “nomads,” people “doin’ the van life,” live simply out of their vehicles and travel the country, running a circuit of seasonal temp work. As with her earlier The Rider and Songs My Brothers Taught Me, Zhao is fascinated by scenes and subcultures, embedding herself and her camera into these worlds, and casting real people as slightly fictionalized versions of themselves. It’s a generous way to make a movie, and she’s a generous filmmaker; she knows exactly how much (or, more precisely, how little) we need of each scene, and McDormand and co-star David Straithairn are such natural, grounded presences that they blend beautifully with the rest of the cast. And its closing passages are absolutely breathtaking.

Speaking of generosity, let’s talk about Lucas Hedges in French Exit. It’s a film that seems constructed to showcase the talents of Michelle Pfeiffer, who is (predictably enough) phenomenal in it. And a lesser actor might’ve been intimidated by that, and tried to pull focus or show her up in some way. Hedges goes the other way, with a quiet and inverted performance, appropriate for a character who has spent much of his life in his flamboyant mother’s shadow, and grown comfortable there. The film around those performances, written and directed by Azazel Jacobs (The Lovers), is darkly funny and delightfully loopy, harnessing both genuine wit and pathos, and turning on a dime between them, with nary a stumble.

Mexican filmmaker Yulene Olaizola takes a potentially discomforting exploitation movie premise and turns it into something wild and unpredictable in Tragic Jungle. Set in the 1920s in the Rio Hondo – the border between Mexico and what is now Belize – it tells the story of young Agnes (Indira Andrewin), who barely escapes the British landowner she is to marry, and flees into the jungle. There, she stumbles upon a group of gum tree workers, hiding out with them as they slowly fall under her spell. Though there are many more of them (most of them armed), the power dynamics don’t shake out as expected. The results are riveting, as blood is spilled (among other fluids), a class struggle is mounted, and her would-be husband attempts to claim what’s his.

David Byrne’s American Utopia is set up as a home run; the Talking Heads front-man honed it as a touring show before its Broadway run, cooking up a nicely balanced mixture of classics and newer material, pacing the crowd-pleasers wisely, and putting together a completely wireless, mobile band (or, as he calls them, “untethered… it’s very liberating”). But director Spike Lee can always bring more to a project like this, and the fluidity of that staging is where Lee shines; he’s always finding new and interesting ways to shoot Byrne and his band, and he’s interested in everyone on that stage, not just the star. Lee’s connection to the material is palpable (Stop Making Sense was an early influence), and you get the feeling he had as much fun making the movie as you’ll have watching it.

It says much about J. Edgar Hoover’s FBI that in the wake of the March on Washington, the day in which Dr. Martin Luther King, Jr. famously delivered his “I have a dream” speech, a memo circulated in the department that insisted of the civil rights leader, “We must mark him now as the most dangerous Negro in the future of this nation,” and thus, “We must destroy him.” Sam Pollard’s scorching, furious documentary MLK / FBI traces that campaign into all its nasty corners, as Hoover, the self-appointed “guardian of the American way of life” lambasted King publicly (responding to King’s Nobel Prize by calling him “the world’s most notorious liar”) and launching a probe into his private life – with go-aheads from RFK and LBJ – that culminated in a notorious anonymous letter suggesting King commit suicide. Pollard started as an editor (Spike Lee’s, in fact), and you can tell; he deftly wields and weaves not only archival footage but newsreels, educationals, fiction films, and FBI “copaganda” to contrast its public image of by-the-book methodology to the lawlessness of the investigations. Most pressingly, Pollard connects the story to our current moment of peaceful protest and respective idolatry, with copious archival footage underscoring the hostility with which King was treated, and not only in the South, and not only by “racists.”

In the Revivals section, William Klein’s 1974 documentary Muhammad Ali, the Greatest makes a fine double-bill with MLK/FBI (or with Regina King’s TIFF drama One Night in Miami, which is set on the night where Klein’s film begins). Klein, who took some of the iconic still photos of the champ, tells his story in four chapters, spanning Ali’s heavyweight championship win in 1964 to his reclaiming of it a decade later in Kinshasa, Zaire – the “Rumble in the Jungle,” so that footage (which comprises much of the second half) will prove fairly familiar to those who’ve seen When We Were Kings. But much of what comes before is both new and astonishing, observational footage capturing the wild characters of the boxing world and the tiny, unseen details in the hours leading up to those bouts. Best of all, Ali was comfortable enough with Klein to let him capture candid, private moments, joking around with friends and hanging out with his corner crew, creating a multifaceted portrait of the private man, the public man, and the space in between.

The story of how the city of Philadelphia bombed the headquarters of MOVE, a Black Marxist collective, was told and told well in the recent documentary Let the Fire Burn; Ephraim Asili’s The Inheritance revisits that history in a much more abstract fashion, within a scripted story of a young man attempting to reanimate that movement in contemporary Philly. The stylized 16mm cinematography gives the film the look of an archival documentary (it takes some time to realize it’s not), and Asili cleverly folds in these elements, blurring the line between fiction, non-fiction, poetry, and education. A prominently displayed La Chinoise poster serves as the broadest of winks, while also underlining that it’s difficult for anyone to do Godard except Godard. Asili assembles plenty of commendable pieces that never quite snap together, but it’s worth watching him smash them together anyway.

Documentary and narrative fuse somewhat more smoothly in I Carry You With Me, in which documentarian Heidi Ewing (Jesus Camp) tells the story of Ivan and Gerardo, two young Mexican men who meet and fall in love, but know they cannot make a life together there. We meet the current iterations of these men in documentary sections, but their backstory is told in narrative flashbacks; in lesser hands, this could’ve failed spectacularly, but Ewing straddles the forms with aplomb. And the subject matter – which involves not only gay love and marriage but undocumented immigration – couldn’t be more timely. “When you dream, it all happens so fast, in flashes,” explains Ivan. “The American Dream moves in slow motion.”

The consensus pick for the most enjoyable documentary of the festival seems to be Michael Dweck and Gregory Kershaw’s The Truffle Hunters, a portrait of the (mostly elderly) men who track truffles in the forests of Northern Italy. It’s a fascinating little mini-culture, and they are a colorful bunch of characters, fiercely protective of their methods (“If you had a child, you would teach him.” “No I wouldn’t!”). They spend most of their time talking to their dogs (“I have Birba! I don’t need a woman!”), and to be fair, they’re great dogs – and the go-pro footage those canine cameramen capture is priceless. Beautifully composed and slyly assembled, it’s one of those movies that doesn’t seem to be going much of anywhere, until the moment it arrives.

When Orson Welles was working on his long-awaited final feature The Other Side of the Wind, he sat down for a two-plus hour conversation with Dennis Hopper, who plays himself as one of the guests in the film’s central Hollywood party sequence. He only appears in the final film for a minute or two; the new documentary Hopper/Welles presents the entirety of that conversation, complete with slates, crew chatter, and various ephemera left in – it’s kind of like a bootleg release of rare studio tape. Hopper does most of the talking; Welles inquires, pushes, and prods, “playing” John Huston’s character of Jake offscreen, but underscoring the degree to which Jake is Welles. Hopper is clearly very high, so the conversation takes some turns, moving from shop talk to philosophizing about politics (“You’re the first person that’s called me a leftist since John Wayne”), persona, activism, religion, and revolution. It’s a real treat for film buffs, funny, wise, sometimes contentious, always engaging.

By this point in his career. Bill Murray has accumulated so much good will that you’re giggling from his first frame. That’s certainly how he’s received in Sofia Coppola’s On the Rocks, where his character – a rich and successful art dealer, clearly not far removed from Sofia’s own father Francis – is full of charm, theories, anecdotes, jokes, and bullshit. He and daughter Laura (Rashinda Jones) have a complex relationship, and Coppola’s film spends a few nights with them, as he confirms her worst fears about her husband’s (Marlon Wayans) possible infidelities; Murray and Jones have an easy, winning repartee, but it’s not all fun and games; when the time comes to talk straight about their history, they do so with refreshing (and difficult) candor and honesty. It’s a film full of little moments of truth – and Philippe Le Sourd’s casually gorgeous cinematography makes this the kind of New York valentine that the festival really needed. One day, this city will look like this again, all shiny and warm and flush with jazz music and cocktails and witticisms, and I’m glad they found a way to remind us of that elusive fact.

This is Not a SXSW Review of 'She Dies Tomorrow'

Y2Kinema from Last Night to Relaxer