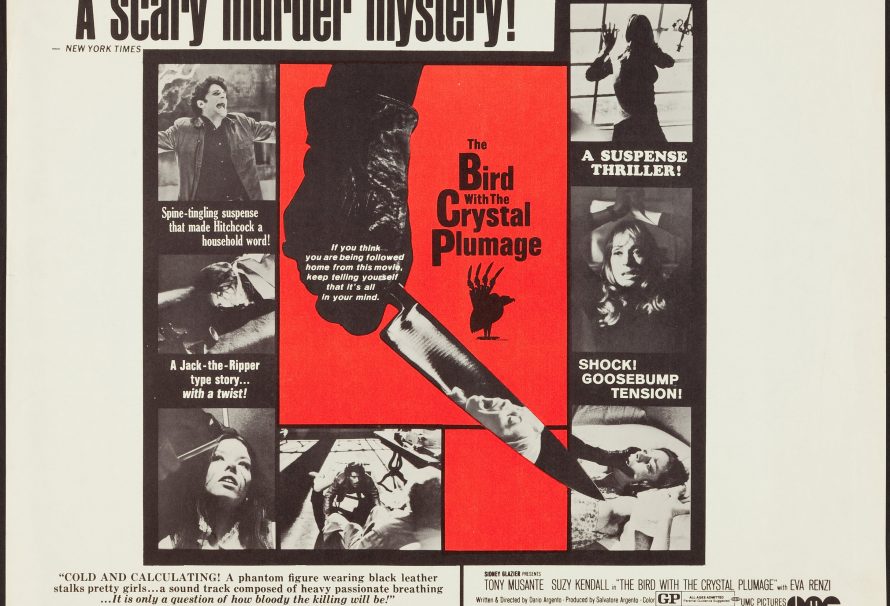 It’s a safe space and we’re all friends here, so this is as good a time as any to admit that giallo is a huge blind spot for me. There’s no good reason; sometimes things just don’t come into your sight lines until it’s too late, and there’s an entire subgenre you’ve missed out on (with a handful of inescapable exceptions), and it feels impossible to backfill. But curiosity should always win out over shame, and it’s a fine month to catch up on scary movies, and thus I spent a couple of hours with Dario Argento’s directorial debut, The Bird with the Crystal Plumage (now streaming on Tubi). I heartily recommend you do the same. It’s a hell of an entry point.

Tony Musante stars as Sam Dalmas, an American writer working (sort of) in Rome, where he hopes to draw inspiration for his own work but ends up just doing some hack ghostwriting (in a freelance writer mood for the ages, he waves off a copy of the book he penned in favor of his payment: “Who needs it, I have this”). But then he stumbles upon something shocking, witnessing an attempted murder at an art gallery – one which he’s unable to prevent, since he can’t get past the building’s giant glass doors, so he can only watch the poor, bleeding woman wriggle closer to death.

That sequence is genuinely upsetting, for both the viewer and the protagonist, who shouts desperately, “HOW DO I OPEN THE DOOR?” The police initially apprehend Sam as a suspect, confiscating his passport (which he was about to use), and thus Argento’s screenplay cleverly mashes up the two of the most durable Hitchcock premises: the guy who sees something he wasn’t supposed to, and the innocent man wrongly accused.

But he’s haunted by what he’s seen, even assaulted by flash images of the assault while trying to folic in bed with his lady, so he offers to help the police who were just trying to lock him up, a good sport if there ever was one. “Is it really necessary?” asks his girlfriend. “Running around, playing detective?” But the amateur policier element is key in these early Argentos (his follow-up, The Cat O’Nine Tails, features not one but two armchair sleuths) – less, it seems, as a model of civic responsibility than as a method of redirecting energy. “What’s happening to me?” Sam asks, reasonably. “This damn thing is turning into an obsession.”

When giallo is only in your peripheral, you hear a lot about its influence on slasher movies – an accurate assessment, to be sure. But what was most striking to this novice, while watching The Bird with the Crystal Plumage, was its influence on De Palma. The aforementioned Hitchcock is the go-to connection for the ‘70s whiz kid, but there’s as much of this picture in his seminal 1980 thriller Dressed to Kill as there is Hitch’s Vertigo, if not more. (The straight-razor murder in the apartment building may as well be a pre-viz.) What’s more, Bird’s obsession with surveillance and voyeurism, from the still photo snapping of the opening sequence to Sam’s recording of his phone calls, reverberates through De Palma’s filmography – particularly Blow Out, which also features a gloved and decidedly giallo-ish killer.

But there’s only so much fun in playing connect-the-dots. What’s most noteworthy about Bird with the Crystal Plumage, as with Cronenberg’s Shivers last week, is the filmmaker’s sheer mastery of suspense and terror technique, right out of the box: how he builds tension (particularly in the closing sequences), uses foreground and background (the shock reveal of the body in the apartment), and inventively deploys the first-person camera (this was not long after Hitchcock’s attempt at an all-first person thriller, the aborted Kaleidoscope).

Of course, this is not just a case of a savvy beginner – every director should be so lucky as to have his debut picture scored by Ennio Morricone and shot by Vittorio Storaro. Then again, a template was clearly being made, and a style was being formed; even on this inaugural outing, Argento’s tone is in place, the storytelling sense is set, and those reds, hew boy, they pop like blood vessels.

Throw in that rarest of beasts, a genuinely shocking narrative twist (seriously, did not see it coming), augmented by some of the most enjoyably feral acting you’ve ever seen, and The Bird with the Crystal Plumage is a first-rate thriller. I’ll be keeping an eye on this Argento fellow. He seems to have some potential.

“The Bird with the Crystal Plumage” is currently streaming on Tubi and The Film Detective.

How Get Shorty (Briefly) Extended John Travolta's Reign of Cool

How Get Shorty (Briefly) Extended John Travolta’s Reign of Cool

Malaise at the Mall: Mallrats at 25