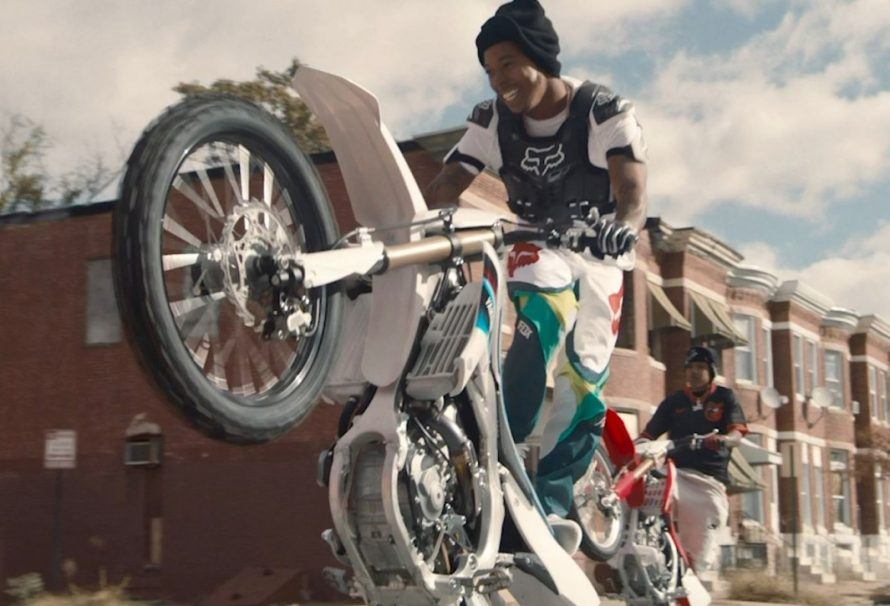 Charm City Kings takes two hours and five minutes to tell a story 12 O’Clock Boys, the 2013 documentary it’s partially based on, took only an hour and 16 minutes to tell. That should tell you something.

In Boys (currently available for free on both Tubi and Crackle), director Lotfy Nathan gives quite the respectful portrait of a crew of African-American dirt-bikers who pop exceptional wheelies and raise other kinds of loud, engine-revving, police-attracting hell on the streets of Baltimore. That movie follows Pug, a young lad who has aspirations to get his own bike and ride along with these inner-city Evel Knievels.

Like so many notorious biker gangs before them, both the police and the media characterize these riders as life-endangering miscreants. However, through Pug’s eyes, they’re carefree rebels. They are men who’ve found their calling by hopping on a bike and making some awesome moves, achieving something that‘ll take them away from Bodymore, Murdaland’s jungle hustle for a little bit. “Whatever’s going on in their life, it’s all gone,” Pug says via voice-over. “You can escape and ride.”

You would think that would be enough for an eye-opening feature film. But for some reason, the people behind Kings, which lands on HBO Max today (it was originally set for release last spring via Sony Pictures Classics, after its premiere at this year’s Sundance Film Festival), thought this story should have a lot more — specifically, a lot more of the same tired tropes you often see in standardized ghetto dramas.

Kings also follows a young kid, a middle-schooler/aspiring veterinarian nicknamed Mouse (Queen & Slim’s continually slack-jawed Jahi Di’Allo Winston). He and his pals Lamont (Donielle Tremaine Hansley) and Sweartagawd (Kezii Curtis), a chunky kid who is there only to be dissed and dismissed by everyone, long to be part of the local dirt-bike community — specifically The Midnight Clique, a gang of Motocross-level, bike-riding drug dealers whose leader, the OG gangsta Blax (rapper Meek Mill, in a not-bad dramatic turn), just got outta jail.

Already, this movie has you thinking that these bikers are nothing more than thugs on wheels. Never mind that in Boys, bikers usually become bikers so they don’t fall prey to That Life. They’re also such adored, revered members of the community, even street gangs don’t mess with them. But, hey, where’s the drama in that?

Kings immediately conjures up its own drama. At first, Blax takes Mouse under his wing, getting the youngster to work in his shop and eventually build a bike of his own, so Mouse doesn’t end up like his slain older brother. Of course, when the bills start piling up at the house, Mouse and his friends start working for the Clique — because, if you do something for HBO and it’s set in Baltimore, inner-city kids better be working in the drug trade at some point. (In what can only be described as a pitifully obvious tip-to-the-hat, Mouse is seen walking down the street in one scene in an “Avon & Stringer & Wee-Bey & D’Angelo” T-shirt.)

All these bad decisions, both behind and in front of the camera, make Kings (produced by Will Smith, Jada Pinkett Smith and Pinkett Smith’s brother Caleeb) an agonizing movie to sit through. Puerto Rican director Angel Manuel Soto (La Granja) mostly uses his first shot at helming a stateside film to show off his knack for fancy Steadicam work. He and cinematographer Katelin Arizmendi occasionally glide the camera through the homes and street corners, making the viewer feel like they’re floating through the grungy surroundings. They even craft a quick-cutting chase scene between the bikers and the police that looks like an audition reel for the next Fast & Furious movie.

I wished Soto cared just as much about the story, which is unsurprising, tiresome, and nauseatingly formulaic. TV scribe Sherman Payne’s script is as predictable as they come, surrounding Mouse with such played-out characters as the harried, chain-smoking mother (a wasted Teyonah Parris), a heart-of-gold cop mentor (William Catlett), a sensitive girl (Chandler DuPont) who tries to reach Mouse’s tender side (we know she’s sensitive because she takes photos with an old-school, Pantex camera) and even a bratty-ass sister (Milan Ray) who bribes ol’ boy whenever he sneaks out. I would love to find out if there is anything left from the draft Barry Jenkins, who shares a story credit with Kirk Sullivan and Chris Boyd, wrote. I’m gonna go out on a limb and say probably not.

When Charm City Kings  is finally over, it has the nerve to end with a montage of clips from various dirt-bike riders, doing stunts, wiping out, having a grand-ass time. These clips only remind you that a unique, entertaining, cliche-free movie about these bikers could’ve been made — and, just like the documentary, it could’ve been good.

Review: Bones and All