As you probably heard (unless Fox News is your only source of information), there were numerous large protest marches throughout the world today, as people took to the streets to register their dissatisfaction with the latest Underworld movie.

No, I kid, it was about Trump. Chelsea Handler helped organize a march on Main Street here in Park City — so if you had Chelsea Handler, Main Street, and during Sundance on your “preaching to the choir” bingo card, step up and collect your winnings — and it drew a massive crowd. Considering how massive the crowds usually are on Main Street during Sundance’s opening weekend, to say that this drew a particularly massive crowd is noteworthy.

I marched with them in spirit, but in physical reality I stayed indoors and wrote. Then it was time for Landline, the follow-up to Obvious Child from director Gillian Robespierre and star Jenny Slate. Obvious Child, a hit at Sundance ’14, was a comedy about a young woman grappling with an unplanned pregnancy and her decision to have an abortion. Landline, about relationships and infidelity, is broader and more mature, though not as entertaining (which I guess is life in a nutshell).

It’s set in 1995 for no particular reason. That’s why it’s called Landline, because everybody still had landlines then. (You know who else still has landlines? Most movie characters.) Anyway, Slate plays a woman who’s engaged to be married but feeling unsure. Her parents — Edie Falco and John Turturro! — have discord in their marriage, too, and her teenage sister (newcomer Abby Quinn), observing these fractured relationships, wonders if falling in love is even worth it. Controversially, the movie’s answer seems to be yes.

Right after Landline was Bitch, a movie that you’re allowed to say in front of your mom because in this context it means a female dog. It stars Jason Ritter as an oblivious husband and father whose wife (Marianna Palka, who also wrote and directed, and who is Ritter’s real-life partner) has a mental breakdown and starts acting like a dog — barking, pooping, not wearing clothes, etc. This sounds like an insane premise for a movie, and it is, yet it’s not even the first time I’ve seen it used at Sundance. (See also: Bark, starring Lisa Kudrow.) Ritter does well with the comedy of a frazzled, wild-eyed husband suddenly obligated to take the kids to school, though the Mr. Mom stuff wears thin pretty fast (just as it did in Mr. Mom, now that I think about it).

Post-Bitch, I had 30 minutes to kill, so I went to the lobby of the Yarrow Hotel, across the parking lot from the theaters where the press screenings are held. There’s a screening venue in the Yarrow, too, and I was sitting in the hallway outside of it. People were exiting to use the restroom before their movie started, but the women’s was closed for cleaning. When ladies saw this and were vexed, I told them that there was another bathroom just upstairs, right above this one. They were grateful for the tip. Not all heroes wear capes. 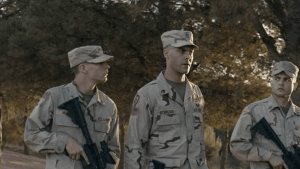 Then: The Yellow Birds, a war movie about how war is so messed up, man. What is it even good for? It’s based on a novel by Kevin Powers (though this fact is buried deep in the credits), and it stars Alden Ehrenreich and Tye Sheridan as cute Army boys who go to Iraq to have their lives ruined. It would be a perfectly good “war is hell” movie — which is to say, as good as the thousand or so other “war is hell” movies that have come out in the last 15 years — were it not for a crucial narrative mistake. One of the soldiers goes missing, the other one has PTSD and won’t talk about it, and so the movie frames the disappearance as a mystery. When the PTSD soldier finally explains what he knows, the answer is intensely lame and unsatisfying. Don’t make something a mystery if it doesn’t need to be, and especially don’t do that if solving the non-mystery will be disappointing. This shouldn’t need to be spelled out.

While standing in line, I had a pleasant conversation with a journalist who writes for a Norwegian newspaper that has 2.5 million subscribers. We were talking about Chasing Amy, which premiered at Sundance 20 years ago this week and which is not a good movie but which my new acquaintance considers the best rom-com ever made. We agreed to disagree, but that’s beside the point. The point is, she has more readers than 99% of the publications represented at Sundance, but does she get the Express badge that lets you waltz in to any screening you want? No. Because life is unfair, and because fate is particularly cruel to Norwegians.

The day’s last event was a press screening for Fun Mom Dinner. This was a secret press screening (insofar as something emailed to 500 people can be considered “secret”), not on the official schedule, and it required an RSVP as opposed to just being able to show up. That must have been a deal-breaker for a lot of press, because there were only about 50 people there.

The movie was written by Julie Rudd (Paul’s wife) and is unfortunately coincidentally similar to last year’s Bad Moms. Here, Toni Collette, Katie Aselton, Molly Shannon, and Bridget Everett are preschool moms who get together for a fun night out. Hilarity, as they say, ensues. There are scattered raunchy laughs, but the plot goes way off the rails in the second half. There’s also an interlude with Adam Levine as a bartender who flirts with the Aselton character (who’s unhappy in her marriage), a performance so smug, wooden, and ruinous that it could only have come from Adam Levine. Adam Levine: a name you can trust.

Don’t worry, everyone! It snowed for most of the day, then stopped for a while, then dumped several more inches on us. At press time, meteorologists were forecasting that it would continue to snow until Memorial Day. Sundance attendees are advised to shelter in place. Some are so desperate that they have begun to eat carbs.

First up for me today was Before I Fall, directed by Ry Russo-Young (Nobody Walks). This is what would happen if Nicholas Sparks rewrote Groundhog Day as a teen-angst melodrama, with Zoey Deutch as a high school senior who dies and then keeps reliving her last day. She was a bit of a mean girl, it seems, and she needs to change that before God or the screenwriters or whoever will let her move on. It’s not a comedy, though at one point the girl’s parents tell her she’s grounded and she retorts, “I’m already grounded!” You know, by the universe! I’m trapped in an existential purgatory until I atone for my sins, Mom! You wouldn’t understand!

Before I Fall is set to open theatrically in March, presumably rated PG-13 and aimed at teenage girls. It’s clunky and on-the-nose, but it presents a positive message and has a cool soundtrack, so there you go, $200 million domestic.

There was just enough time to grab a snack at the adjacent grocery store before trudging back to the press tent to line up for the next screening: L.A. Times, which is not about the newspaper of that name but rather the life and times of a handful of fictional Los Angeles tools who work in showbiz and spend their free time being insufferable. It was written and directed by Michelle Morgan, who also stars, with Jorma Taccone as her boyfriend and Dree Hemingway (Ernest’s great-granddaughter) as her lovelorn best friend.

The film gets in some good jabs at the pretentious, hollow L.A. lifestyle — everyone’s “working on” a script; someone says that palm trees “are actually very condescending” — but in the end I’m not sure the movie realizes just HOW insufferable these people are. I think our disdain is ultimately supposed to be diluted by affection, but I only felt the disdain part. Nonetheless, it’s a disdain that I largely enjoyed, and the film is well-made.

Earlier today, a film called A Ghost Story (starring Rooney Mara and Casey Affleck) premiered to great acclaim, after having already gotten buzz for being picked up by hot young distributor A24 before the festival even started. These factors meant that the press screening, scheduled for this evening, was going to be packed. Sure enough, the line was at capacity an hour early, and by the time I got out of L.A. Times, it was too late for me. Not even a full thirty minutes of screaming “DON’T YOU KNOW WHO I AM??” could alter my fate. So I had no choice but to walk through a quickly developing snowstorm back to the condo to get some writing done. This writing included some of the words you are now reading.

I had to rest up anyway, because I had a midnight screening on the docket! The press screenings are easier for critics like me to get into, but it’s fun to do a few public screenings too, and I have longstanding fond memories of seeing movies at midnight in Park City with friends. Rob Hunter and I trudged (trudged is the official verb of Sundance) up the hill to the Park City Library, which is obviously where movies are shown, and found our friend and roommate Scott Beggs. Movies at midnight with friends!

It was the world premiere of XX, the first horror anthology written and directed entirely by women of the female lady gender of the opposite sex from me — specifically (and in order of appearance) Jovanka Vuckovic, Annie Clark (aka singer St. Vincent), Roxanne Benjamin, and Karyn Kusama (Jennifer’s Body, The Invitation), with animated interstitials by Sofia Carrillo. Introducing the film to a packed and enthusiastic audience, the directors said XX was conceived as a solution to the lack of opportunities for women in film, particularly in the horror genre. You want something done right, you gotta do it yourself, basically.

Typical for a horror anthology, XX is hit or miss. All four of the shorts (which are 13-20 minutes long) have something truly great about them, but they all have something disappointing, too. Vuckovic’s “The Box” has terrific effects and a creepy premise but no payoff; Clark’s “The Birthday Party” has the delightful Melanie Lynskey but is a dark comedy, not a horror, and builds to a single punchline; Benjamin’s “Don’t Fall” is slick, meat-and-potatoes, people-go-hiking-and-get-killed horror, but has an underdeveloped story; and Kusama’s chilling “Her Only Living Son” likewise fizzles out at the end. But the overall effect of the anthology is strong, even when the individual elements aren’t.

We trudged back to the condo afterward, arriving at the same time that super bros Jeff Bayer, Vince Mancini, and Dan Mecca returned loudly from the party they’d been to, at which drinks had evidently been served. It seems to have been quite a raucous party, considering it was for a movie about the Oklahoma City bombing. Bayer went to bed, while Dan and Vince told stories of his exploits. (Apparently he somehow got a new winter coat from someone? I need to follow up on this.) The movies, of course, are the important thing at Sundance, but without friends and friendly colleagues it can be miserable.