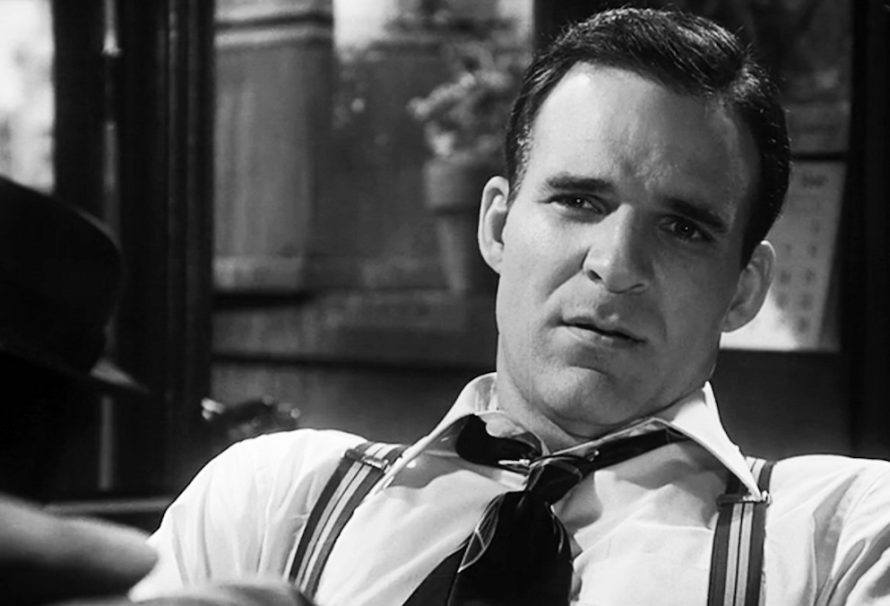 After hitting the paddle ball out of the park with his first starring role in 1979’s The Jerk, Steve Martin stretched himself by demonstrating his dramatic chops and dancing skills in Herbert Ross’s big-screen adaptation of Dennis Potter’s Pennies from Heaven in 1981. Audiences didn’t stretch with him, however, so for his next feature Martin reunited with director Carl Reiner to collaborate (along with screenwriter George Gipe) on the film noir pastiche Dead Men Don’t Wear Plaid, appropriate Noirvember viewing for those who’d rather not take the stuff straight. Much like private detective Rigby Reardon’s famous java, though, Dead Men has some unusual ingredients mixed in.

Opening with a vintage Universal logo reflecting its 1946 period setting and filmed in black and white by director of photography Michael Chapman to match the classic crime films it’s parodying, Dead Men lampoons many of the signifiers of noir. The seedy detective, the alluring femme fatale, the hard-boiled narration, the twist-laden plot that needs to be explained at length during the wrap-up – all get trotted out when Rigby (Martin) is hired by Juliet Forrest (Rachel Ward) to look into the mysterious circumstances surrounding her scientist father’s death.

The set-up is straight out of The Maltese Falcon, but that’s not one of the 18 films Dead Men culls scenes from to allow Martin to play opposite the likes of Alan Ladd, Barbara Stanwyck, Ray Milland, Ava Gardner, Burt Lancaster, and, yes, Humphrey Bogart. (His scenes are borrowed from three different movies since he’s kept busy doing Rigby’s shoe-leather work and calling in his findings.) Most of these interactions are accomplished through intercutting and the judicious use of doubles for Martin’s scene partners, but he’s also composited into a sequence from Hitchcock’s Suspicion so he can briefly share the screen with Cary Grant.  The roll call of familiar faces then continues with Ingrid Bergman, Veronica Lake, Bette Davis, Lana Turner, Edward Albert, Kirk Douglas, Fred MacMurray, James Cagney, Joan Crawford, Charles Laughton, and Vincent Price, with the writers resorting to increasingly absurd explanations for Rigby’s wardrobe changes so he can be inserted into their scenes.

These seamless transitions were accomplished with the expertise of famed costume designer Edith Head, who died shortly after filming wrapped and to whom Dead Men is dedicated, along with “all the brilliant technical and creative people who worked on the films of the 1940’s and 1950’s.” (One of them, composer Miklós Rózsa, was likewise scoring his final film, but he lived on until 1995.) This reaches the height of incongruity when Rigby/Martin does back-to-back drag to stand in for Stanwyck in scenes from Double Indemnity and impersonate Cagney’s mother in White Heat. As convincing as he attempts to be, these moments reinforce the notion that – to borrow the title of Martin’s 1979 stand-up record and 1980 television special – comedy is not pretty.

Putting aside the gimmick of slotting Rigby into scenes from This Gun for Hire, The Lost Weekend, The Killers, Notorious, The Glass Key and others, Reiner, Gipe, and Martin work in an assortment of running gags that obey the rule of set-up and payoff. One of the less PC ones involves Rigby feeling up Juliet twice when he finds her passed out, but she gets him back by groping him later on. Other gags include Rigby repeatedly getting shot in the arm and going to Juliet to suck the bullet out, and the revelation that the phrase “cleaning woman” causes him to go berserk. A fair bit of time passes, however, between the first mention of his “famous java” and when he makes it for Lancaster’s doomed Swede Andersen from The Killers.

Dead Men also plays with the conventions of noir by including moments where Juliet replies to Rigby’s voice-over as if she can hear it. (Naturally, this momentarily throws him for a loop.) The plot point that comes up most, though, are the lists of the “Friends of Carlotta” and “Enemies of Carlotta,” which don’t add up until Rigby is tipped off that Carlotta isn’t a person but a place – an island off the coast of South America where the film’s climax, borrowed from relative obscurity The Bribe, takes place. If nothing else, Dead Men makes great use of its spectacular chase though a street carnival and attendant fireworks display. All that’s left, then, is for Rigby to uncover the true nature of the conspiracy he’s been unraveling ever since Juliet fainted in his doorway.

While Dead Men Don’t Wear Plaid wasn’t as much of a runaway hit as The Jerk, it was enough of an artistic success that Reiner, Martin, and Gipe re-teamed for the following year’s mad scientist spoof The Man with Two Brains. More comedies followed – including Reiner and Martin’s crowning achievement, the body-switch romance All of Me – but they never made another film as conceptually daring as the time they went Plaid.

“Dead Men Don’t Wear Plaid” is available to rent or buy from the usual suspects.

Everything Strange and New: The Sweet Hereafter at 25

Classic Corner: Elevator to the Gallows