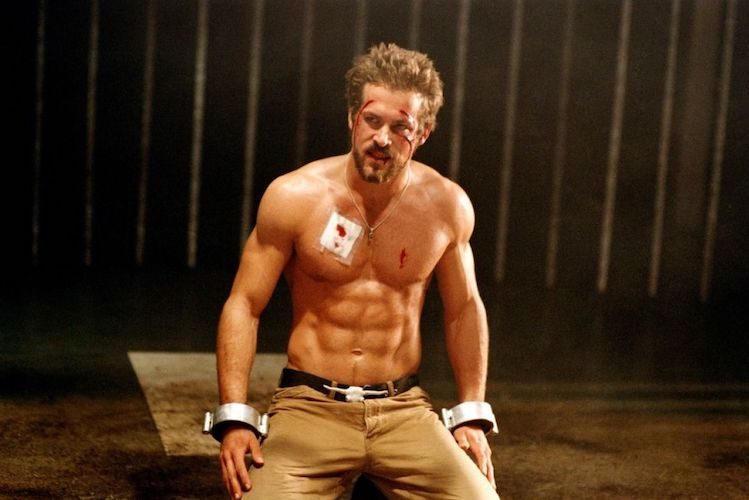 Deadpool came in like a comet in 2016, grossing $783.1 million worldwide — fantastic for any movie, but unheard of for a hard-R superhero movie. Audiences responded to Ryan Reynolds’ Bugs-Bunny-on-meth take on the character, and to the way the film didn’t believe in a fourth wall and poked fun at the superhero genre.

But as much as audiences were delighted that they hadn’t seen anything like Deadpool before, they actually had. Twelve years before Deadpool — seven years before Green Lantern — Reynolds had a supporting role in Blade: Trinity as wise-cracking vampire hunter Hannibal King. Audiences can be forgiven for not remembering this because the film was a flop best remembered for comedian Patton Oswalt’s account of how miserable a shoot it was. But revisiting the film, we see that Hannibal King is actually Ryan Reynolds’ first run at playing Deadpool — he just didn’t know it yet.

Hannibal King was turned into a vampire after hooking up with the wrong person. After five years of being what he calls a “vampire cabana boy,” he was rescued by Abigail Whistler (Jessica Biel) — estranged daughter of Abraham Whistler (Kris Kristofferson), Blade’s mentor — and cured of his vampirism. He has now dedicated his life to fighting vampires. But King’s character is established before we even see him, as Blade: Trinity begins with his opening narration, which contains elements of Deadpool’s meta-commentary:

“In the movies, Dracula wears a cape, and some old English guy always manages to save the day at the last minute with crosses and holy water. But everybody knows the movies are full of s***. The truth is, it started with Blade, and it ended with him. The rest of us were just along for the ride.”

King doesn’t appear on screen until 32 minutes in, and once he does, the film turns into a buddy comedy where Blade is Murtaugh and King is Riggs. Blade holds King and the rest of the Nightstalkers as a joke outfit because they have fun while hunting vampires. Abigail listens to her iPod; King notes, “She listens to trip-hop, trance, I’m more of a David Hasselhoff guy.” King makes jokes and wears a nametag that reads “Hello My Name is F*** You.” In every scene King fires off quips and zingers both at Blade and the rest of the team. When he’s eventually captured by Dominic Purcell’s Dracula he is in manic survival mode, and that’s where his delivery most directly mirrors Deadpool.

Hannibal King wakes up to discover he’s being held captive by Danica Talos (Parker Posey) — the vampire who turned him — and Jarko Grimwood (Triple H). They have this conversation:

DANICA: Tell us about Blade, King. What’s this weapon he’s been planning?
HANNIBAL: I can tell you two things. One, your hairdo is … ridiculous. Two, I ate a lot of garlic, and I just farted. Silent but deadly.
JARKO: [choking him] Spit it out, you f****** fruitcake.
HANNIBAL: All right, f***, I’ll tell you about the weapon! [regains his composure] It’s a new flavor-crystal formula. Twice the chocolatey goodness, half the calories. Plus it helps prevent tooth decay.

Later in the scene, after meeting a vampire Pomeranian:

JARKO: Precious, isn’t he?
HANNIBAL: Well, that depends who you ask. Because clearly, this dog has a bigger dick than you.
JARKO: And when the f*** did you see my dick, f***-face?
HANNIBAL: [pointing to Danica] I was talking to HER!

And the end of the scene:

DANICA: Enough! It’s not funny anymore!
HANNIBAL: No, it’s not, you horse-humping bitch! But it will be a few seconds from now. See, that tickle that you’re feeling in the back of your throat right now? That’s atomized colloidal silver. It’s being pumped through the building’s air conditioning system, you cock-juggling thunderc***! Which means the fat lady should be singing right about now! [pause] Heh, this is awkward. [pause] Do you have a cell phone?

The biggest difference between King and Deadpool is the speed. Deadpool moves at a thousand miles an hour. The film is essentially a cartoon, whereas Blade: Trinity almost grinds to a halt when Reynolds is offscreen. King is still a cartoon, but the film tries to ground him via his fear of being a vampire again.

There’s an alternate timeline where Blade: Trinity is a big enough hit that New Line green-lights the Nightstalkers spinoff where, after rendering vampires extinct, they fight werewolves. If that happens, Reynolds almost certainly passes on Green Lantern and perhaps never becomes Deadpool. Luckily for him, the Blade franchise managed to miss every wave of superhero movies. The first one (1998) came too early, the second (2002) came months before Spider-Man, and the third (2004) came during the pre-MCU/Dark Knight bout of superhero fatigue.

Hannibal King might be a footnote on Ryan Reynolds’ résumé, but he’s been highly influential in his career. Reynolds wandered through a desert of franchises to chase this character. With Wade Wilson and Deadpool he found it. Audiences might have been shocked at how audacious Deadpool was, but in reality it’s just Hannibal King in what Wade would confirm is a bigger package.