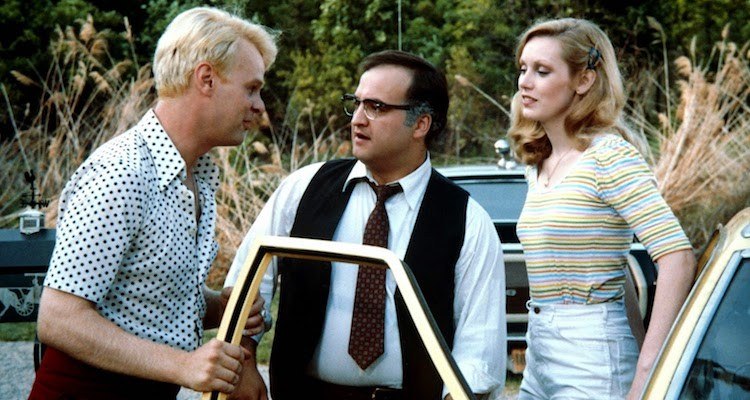 At face value, 1981’s Neighbors is The Blues Brothers Take Suburbia. The yellowed cover of my VHS copy calls it “A Comic Smash” and promises “Belushi and Aykroyd are at it again and the results are uproarious!” without a hint of attribution, making both statements about as legally binding as the GoodTimes Home Video slogan, “We Make Collectibility A Way Of Life.” The earlier advertising dubbed it “A Comic Nightmare” and let the presence of Saturday Night Live’s hottest stars do the heavy lifting. But even the deceptive trailer couldn’t quite hide the movie’s identity crisis.

It’s pitched as a comedy of torment, with wild child Aykroyd doing his best to ruin human necktie Belushi’s life. The Twilight Zone theme is liberally deployed to sell just how out there these titular neighbors are. But there’s also not a laugh to be found. It feels like one of those clickbait editing experiments, where a horror trailer is pulled out of a comedy with a few jarring flashes of white and stringy music, without touching a frame. Despite Columbia Pictures’ best efforts to hide it, nothing about Neighbors is conventional and most of it barely qualifies as comedic. It’s an awkward, unnerving descent into the suburban prison of strait-laces and the violently spontaneous anarchy it takes to break out. On both sides of the camera in Neighbors, every decision is more bewildering than the last.

Avildsen in 1977, accepting an Oscar for directing Rocky.

The first came courtesy of director John G. Avildsen (who died June 16 at 81), who wanted Belushi for the mild-mannered part. The actor naturally assumed the director was wooing him for the volatile and brazen bully-next-door, Vic Zeck, but he couldn’t ignore another chance to prove his range and shake off his increasingly toxic reputation as a walking narcotic. Belushi was serious about turning himself around; for his latest movie, the gentle romantic comedy Continental Divide, he remained as sober as Sunday Mass. Neighbors, a blackly comic adaptation of a Thomas Berger novel that bordered on absurdist existentialism, was one more step in the right direction. Belushi wasn’t Avildsen’s first choice (that’d be Rodney Dangerfield, a whopper of a what-if), but he knew the freshly dry and devoted star could pull it off.

If only Belushi had stayed that way. The production of Neighbors devolved into a coke-dusted war zone. Avildsen had to stall several days’ shooting until Belushi was sober enough to talk. Dan Aykroyd, who joined to play against his own fast-developing type alongside his friend, tried to act as an impartial buffer between the two. That lasted until both stars decided Avildsen couldn’t direct comedy if his life depended on it. Desperate pleas to the studio to have him replaced by Blues Brothers director (and close friend) John Landis went unanswered. Larry Gelbart, developer of a short-lived TV show called M*A*S*H, wanted his name off the script after Aykroyd and Belushi had their way with it. Early test screenings inspired historically low ratings for Columbia Pictures. Neighbors managed to rack up not just one, but two rejected soundtracks — Belushi-forced songs by Fear and an orchestral score by Blues Brothers Band member Tom Scott.

Yet against all odds, the actual movie is still more interesting than the making.

Neighbors opens on a dead-end street and never leaves. Two middle-class mansions rest under the stick figure shadow of high-voltage power lines. But as we soon find out, those lines leak enough static to light a cigar at 20 paces, and the lazily swaying reeds that lend a rustic touch hide a fog-belching swamp right out of a lesser Wolfman movie. In Neighbors, the only difference between Norman Rockwell and Rod Serling is how hard you squint.

And if you don’t pick up on that, Bill Conti’s score will clue you in before the end of the opening credits. Mandated by the studio when test audiences didn’t understand that Neighbors was a comedy, Conti’s score may be the most obvious ever composed; at one point it even wolf-whistles at a naked woman to tell us she’s a naked woman. Whenever Belushi’s on-screen, it’s a jaunty town-and-country jingle perfectly suited for a robed walk to the mailbox. Whenever Aykroyd interrupts, wibbly-wobbly theremin invades like a swarm of tinfoil UFOs. Whenever Belushi’s Native American-obsessed wife (Kathryn Walker) enters a room, so does the incessant beat of war drums. When Aykroyd’s undersexed and predatory wife (Cathy Moriarty) bats her eyelashes through a mail slot, the brass section practically blushes. Critics almost universally loathed the score. While Tom Scott’s rejected efforts follow the Elmer Bernstein Law of Scoring Comedies and play it entirely straight with just a touch of horror, Conti’s music makes Neighbors dementedly literal. With Scott, it’s a stage play. With Conti, it’s sitcom.

Neighbors fits that bill well enough; it’s The Odd Couple on a cul-de-sac. But in the crowded world of sitcoms, everyone speaks exclusively in set-ups and punchlines. In Neighbors, there are no punchlines, just hanging gasps and lingering bile. Its closest comedic relative might even be Seinfeld. Almost every single act in the first half of the movie would work as an episode. Vic borrows $32 from Earl to buy everyone some Italian take-out, but Earl catches him making the food at home. Vic’s wife, Ramona, exposes herself to Earl within a half hour of meeting him and he doesn’t know how to respond to it. Earl’s wife, Enid, mentions spying a great recipe for chicken in the newspaper. When he checks on her in the kitchen, she’s reheating some waffles for the guests and scolds him for assuming she’d be making the chicken.

But Jerry, George, and the gang would eventually get their comeuppance for poking at such inconsequential annoyances. Neighbors never gives Earl a break. When he confronts Vic about the fraudulent Italian food, the boorishly charming neighbor manages to win over everyone else at the dinner table, make Earl look like a petty snoop, and sidestep any mention of the $32 entirely. It’s never mentioned again. There are few laugh-out-loud moments in Neighbors because there aren’t supposed to be; the humor is in the squirming.

More so than Continental Divide and anything Aykroyd would do until his Academy Award-nominated turn to character acting in the ‘90s, Neighbors shows off the fascinating, uncomfortable range of its dynamic duo. For all his drug-fueled demands, Belushi plays Earl Keese almost perversely straight. When he catches Vic reading his checkbook, Earl gets heated, but never hot; that wouldn’t be polite. When faced with the prospect of his first hot date in 20 years, Earl puts in his Visine to the motivational tune of “Stayin’ Alive.” His preferred term for male genitalia is “unit.” It’s all too easy to forget Belushi’s behind those JFK glasses.

Aykroyd, on the other hand, cuts loose. Vic Zeck is an Aryan nightmare from his neon-blond hair to his permanently dilated blue eyes, and Neighbors doesn’t pull that punch. While inspecting Earl’s house, the only book Vic touches has a prominent swastika on the spine. He speaks fluent German to his dog. He violently invades a peaceful neighbor’s land to ultimately take it out from under him. Aykroyd plays Russian roulette with the audience, underlining every scene with cringe-inducing tension, but you’re never sure if the gun’s really loaded, even after he almost kills Earl Keese with real bullets. His unhinged performance foreshadows the coming of Jim Carrey (one laugh in particular is dead-on), but Aykroyd pushes that abrasive zaniness to its most disturbing edges.

Neighbors sounds like any number of interchangeable ‘80s comedies — Family Man competes with Cool Man for the unconditional love of his family. But with Avildsen shooting most of it like a horror movie and the impossibly bankable leads doing everything they can to not be themselves, Neighbors is almost the anti-‘80s comedy. When Columbia finally released it, they shoved it into as many theaters as possible on its opening weekend to counter the inevitably destructive word-of-mouth. It would be Belushi’s final performance; he overdosed two-and-a-half months later. Critics didn’t know what to make of it and neither did audiences.

It’s not an unheralded classic — not all the weird works, the (studio-mandated) ending’s either confusing or dissatisfying depending on how you watch it — but it’s a fascinating curio that deserves more attention. Despite the director and stars fighting to make different movies, Neighbors emerges as a singular piece of off-key black comedy, where the stress fractures only provide more texture. In a career diverse enough to include Rocky, Lean on Me, and a Van Damme movie, Neighbors remains one of John G. Avildsen’s strangest works, his most forgotten and most unforgettable.

Jeremy Herbert lives in the uncomfortable dark comedy of Cleveland.

Sins of the Father: The Unfair Orphaning of The Fly II

From Scrooge to Daddy Warbucks: Personal Memories of Albert Finney