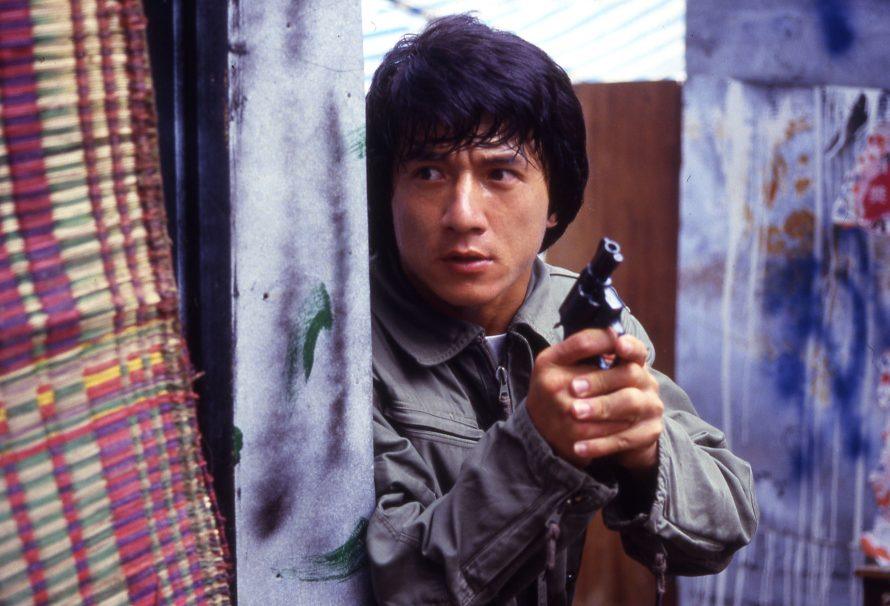 Spinal damage falling from a pole. A pelvis dislocation that almost led to partial paralysis. Countless cases of broken noses and concussions. Imagine getting up in the morning and knowing that pain is inevitable. That is the life of a man dedicated to high-octane stunts. That man is Jackie Chan.

As a performer, Chan was motivated to shatter audience expectations of action films, and he made sure Police Story opened with an unforgettable set piece. Ka-Kui Chan (Jackie Chan) is on assignment, conducting a drug bust. Up on the hill, a little shanty town is about to be destroyed. With the raid compromised, the bullets begin firing and the body count begins mounting. Destruction rains throughout the town with cars tumbling down the countryside, taking down the flimsy structures in their wake. Lesser movies build to a signature set piece, but not Police Story. The intro sets a pace for a flurry of intense stunts that have few equals. It’s a wonder that Jackie Chan is still alive.

Chan created Police Story in 1985 – not only starring but writing and directing. His character Ka-Kui encapsulates everything people love about Jackie Chan: a well-meaning, slightly foolish guy who must overcome great odds in the face of adversity. His personality, background in martial arts, and willingness to risk his body for his craft would make him a household name.

After the shocking death of Bruce Lee in the early ‘70s, Chan got his start in Bruceploitation movies like New Fist of Fury (1976). Chan could never be a replica of Lee; he had his own style and charisma – such as his aptitude for physical comedy – that would guide him to success. In a New York Times interview, he admitted as much: ”I wanted to be like a Chaplin or Buster Keaton, but all the martial arts directors I worked with wanted me to copy Bruce Lee. So after I got famous, I started to change a lot of things.”

We wouldn’t be talking about Police Story today without the death-defying stunts performed by Chan and his stuntmen. Known as Jackie Chan’s Stunt Team, featuring several of his co-stars from previous movies, their familiarity with each other made the work easier and safer – or, as safe as falling off a building or hanging off a bus can be.

If you thought cars barreling down a hillside and destroying a small village was exciting, then trying to catch up with a double decker bus is astonishing. Once Ka-Kui has caught up with the bus, the next dilemma comes with finding a way to get on. Using only an umbrella, Chan latches onto the speeding bus, hanging on for his life. Unsurprisingly, this has become one of his signature stunts; in an excerpt from the documentary, Jackie Chan: My Stunts (1999), Chan explains that the umbrella had a metal handle, making it a bit more sturdy. But metal or not, that’s all that separated him from the pavement.

Police Story showcases Chan’s comedic abilities as well. In one instance, he’s taking cakes to the face from his jealous girlfriend; in another he is executing a brilliantly choreographed knife fight. His history taught him how to bend the camera to his will to showcase his martial arts, and using it in his comedy routines is an extension of that ability. When Ka-Kui is demoted and asked to answer phones, it becomes a juggling act of planning a date with his girlfriend, answering calls for a lost cow, and managing multiple conversations. Ka-Kui goofs up the entire encounter and ends up disappointing those who needed his help despite his valiant attempt. What could’ve been a throwaway scene becomes one of most memorable gags in the movie.

The finale takes place at a shopping mall, and you would think that they shattered every plate of glass in the place. Thankfully, most of the glass is what is known in the trade as “sugar glass,” making the action a lot less risky. Even with reduced risk, accidents are commonplace in Jackie Chan productions, because as he explained in an interview with the Associated Press, “I do my own stunts most of the time, that’s what audiences expect from me.” Chan put multiple outtakes over the end credits of Police Story to showcase that commitment. This blooper reel and in-depth look into the toll the movie’s stunts took on the performers showed his audience that he’s a performer willing to risk it all for his craft.

The biggest stunt of the film consisted of Chan riding down a multi-story vertical pole in the center of the shopping mall. He wasn’t necessarily afraid of sliding down a pole of that height, but the active light bulbs attached to the poll could not be turned off during the hours they were shooting. He was in real danger of being electrocuted. And he slides down the pole, burning his hands, and falling through a plate of sugar glass before chasing after his target. The stunt is actually shown three different times, breaking continuity in the movie, to showcase this spectacular moment.

Police Story was a career-defining role for Chan, winning Best Picture and Best Action Choreography in the 1986 Hong Kong Awards, and Chan went on to star in five additional movies in the venerable franchise, with word that he will return to the franchise once again in 2022. Police Story showed audiences what Jackie Chan could deliver with his charm, kung fu, and incredible stunts that have continued to take our breath away for decades since.

Max Covill has written for Fandom, Polygon, Film School Rejects, Playboy, SyFy, and many others since 2011. He is also the co-host of @itsthepicpod. You can find him on Twitter @mhcovill discussing all things Movies, Video Games, and Anime.

Dick Tried to Warn Us

Review: I Used to Go Here