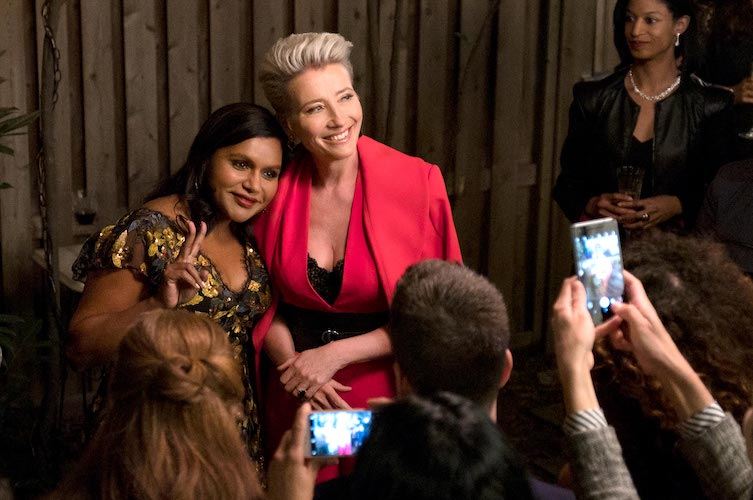 If you live in L.A. and have writer friends connected to the TV world, you’ve likely heard phrases like “diversity hire” bandied about by well-off white-dude acquaintances more times that you can count. If you live anywhere and have zero friends connected to the TV world, you’ve still probably been present for an uncomfortable #MeToo-focused conversation over the family dinner table, highlighting a bit of an often generational divide that doesn’t seem to be closing anytime soon. Clearly the time is ripe for a sharp workplace comedy that gets to the heart of some of these beyond-hot topics. Unfortunately, Late Night is not that film.

Inspired by writer-actress Mindy Kaling’s own experiences as a “diversity hire” on NBC’s The Office, the film takes aim at the boys’ club that is late-night television, as well as the women who are complicit in reinforcing it. Set in an alternate universe where a woman — Emma Thompson’s character, Katherine Newbury — has actually managed to land a coveted job as a late-night host on one of the major networks (remember, in the year 2019, this is still very much a fantasy), Kaling’s character, Molly, is introduced to us as an aspiring comedian who manages, through a mix of fortuitous timing and a bit of ingenuity, to land a coveted spot as a staff writer in New York City.

Unfortunately, the film stumbles a bit in its characterization of Molly, and that’s in good part due to Kaling’s script. The self-deprecating tone she often took on The Mindy Project just doesn’t serve her as well here. After all, getting a job as a staff writer is no mean feat even if you are a hard-working, highly qualified, very funny person with decent connections, so the script’s decision to underline Molly’s background as a “factory worker” feels misguided — especially when it devotes so little time to what appears to be her character’s actually somewhat robust background in standup. She’s not hitting barely attended open-mic nights, when we actually see her work: She’s emceeing what appears to be a sold-out comedy benefit in a decently sized theater, and she clearly knows how to work a crowd. She’s put in the work.

It’s also hard to highlight Molly’s journey when the great Emma Thompson is such a powerhouse as Katherine, a dismissive, workaholic, sharp-tongued comedian who is facing a bit of a personal crisis in her show’s 17th season. Thompson is so good at conveying the pain and humiliation her character feels as she’s confronted with the possibility that her tenure at her own show may be coming to an end. Late Night with Katherine Newbury has gotten stale and formulaic, and it’s little surprise, given that she’s got a writing staff comprised solely of white dudes with Ivy League backgrounds and a whole lot of entitlement. Katherine is wary to connect with her audience or share much of herself with her viewers, and the network — led by a cold executive played with gusto by Amy Ryan — has decided it’s time to force her out and bring in a suitable, more “relevant” (read: Dane Cook-lite) replacement.

Directed by Nisha Ganatra, the film is nicely paced and engaging, and there’s a lot of fun to be had, especially where the homogeneous bro culture of the writers’ room is concerned. The supporting cast really delivers, and Kaling’s script nails the romantic subplot featuring Hugh Dancy’s alterna-comedy-dude character. I don’t want to spoil anything there, but that all felt refreshingly true to life, and I suspect it got a few of us thinking about who the real-life inspiration could have been (we have suspects). On a similar note, the film’s denouement is sweet and subtle, offering up a happy ending without overshadowing the female empowerment narrative. Ultimately, however, Late Night (much like the tepid shows it’s skewering) just doesn’t have the bite or the might we need in 2019.

1 hr., 42 min.; rated R for language throughout and some sexual references

Review: A Beautiful Day in the Neighborhood