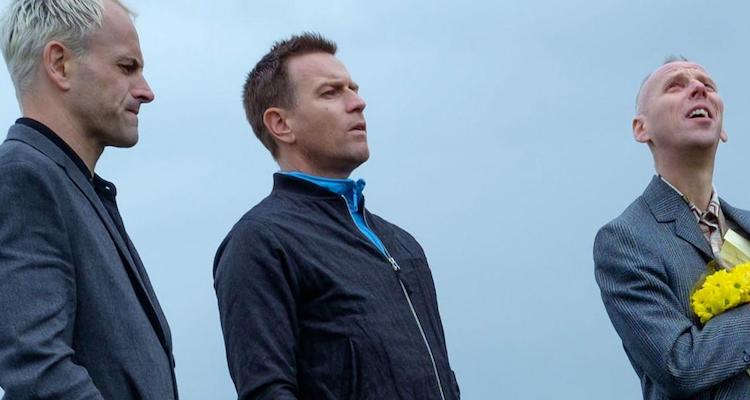 Trainspotting, a cult favorite since the moment it arrived 21 years ago, was Danny Boyle’s second movie and most of the world’s first exposure to Ewan McGregor. Boyle has directed nine more films since then, and McGregor has exposed himself countless times, but fans keep jonesin’ for another hit of that sweet, sweet ‘spotting.

Mark Renton (McGregor) is drug-free (we meet him on a treadmill) but not without health problems. Simple-minded Spud (Ewen Bremner) is despondent over his ongoing struggle with heroin and the impact it’s had on his girlfriend (Shirley Henderson) and son. Sick Boy (Jonny Lee Miller), now going by Simon, has graduated from heroin to cocaine and makes a living blackmailing men with surreptitiously recorded tapes of them having kinky sex with his Bulgarian girlfriend, Veronika (Anjela Nedyalkova). The psychopathic Frank Begbie (Robert Carlyle) is in prison, where he belongs, but soon gets free and tries to reconcile with his wife (Pauline Turner) and teenage son (Scot Greenan), who wants nothing to do with his father’s legacy.

You will recall that when we last saw these fellows, Mark had stolen money from Simon and Begbie, secretly paid Spud his share, and fled the country. His return to Edinburgh, to his childhood bedroom with the train wallpaper, is bound to cause some ripples. Simon, whose goal is to open a brothel with Veronika as madame, fights with Mark initially, then cools down but secretly nurses his grudge. The two pal around again as in old days, pulling little jobs to come up with cash — not to score skag this time, but to get started on converting an old pub into that brothel. There’s a delightful scene where they distract a beer hall full of Protestants by improvising a song about the 1690 Battle of the Boyne.

Begbie is another matter, and the other three avoid him as he tries to resume his life of crime. (His eventual run-in with Mark makes for another terrific moment.) As the underlying tensions among the four percolate, Boyle shows us their efforts to atone for the past, snippets of footage from the first movie popping up frequently in their memories. Spud, who’s got a touch of the poet in him, starts writing stories about the old days. At least two songs that were prominently featured on the original Trainspotting soundtrack appear again here as part of the musical score. There are other nods, too (including an updated “Choose life” speech), but Boyle isn’t wallowing in nostalgia for its own sake. These memories, even the “happy” ones, take on a mournful quality as the four men look back on the wreckage of their half-wasted lives, seeing shadows (in one case literally) of what they’ve lost. If the first movie was about tragically reckless youth, the sequel is about the poignance of adulthood.

Which is why it’s sadder than its predecessor and, purely on the basis of entertainment value, not as dynamic. But the (relative) wisdom of middle age makes T2 a richer character study, the tragicomic junkies evolving into full-fledged human beings. McGregor’s wide-grinned optimist, Bremner’s deceptively dim sadsack, Miller’s coked-out paranoiac, and even Carlyle’s psychotic nutcase feel more authentic now than they did then.

Eric D. Snider lives in Portland, Ore., and believes in heroes, not heroin.

The Twisted Tale of Golan and Globus’s Lambada Movie War

Review: The Trip to Greece