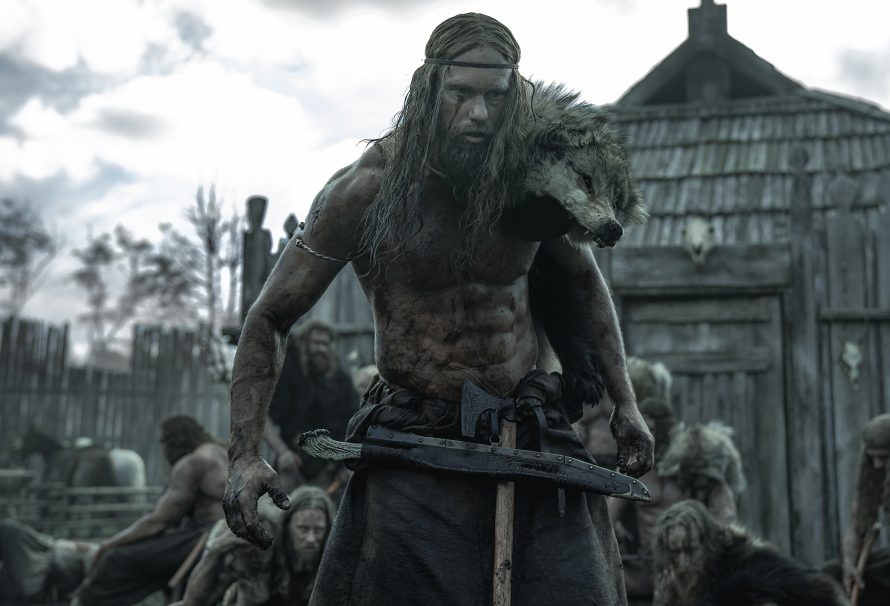 Robert Egger’s The Northman is the kind of giant swing we keep saying doesn’t get made anymore – but here it is. It’s a wildly ambitious metal Viking bloodfest, a Nordic riff on Hamlet with gore galore that opens with promises like  “Hear of a prince’s vengeance quenched at the fiery mouth of hell,” and keeps them. I have no idea how anyone at Focus Features looked at the $90 million budget and thought they’d recoup it. I’d like to think that they wanted to see the movie so bad, they didn’t care.

Eggers and co-scripter Sjón begin their story in A.D. 895, as the splendidly named King Aurvandil War-Raven (Ethan Hawke, who has gone from playing Hamlet to playing Hamlet’s father) returns from the fields of battle, with his men – including his brother Fjölnir (Claes Bang) – in tow. He decides it is time for his young son Amleth (Oscar Novak) to become a man, so out to the woods they go, for an elaborate rite-of-passage ceremony that includes a key bit of instruction: “Should I die by the enemy’s sword, you must avenge me or forever live in shame.” He dies by the enemy’s sword mere minutes later. What are the odds?

Amleth flees, barely escaping with his life, but leaving his poor mother (Nicole Kidman) in Fjölnir’s clutches. Years pass.  (Side note: this passage of time is indicated in the trailer by a marvelous jump cut that I frankly wish they’d have used in the film.) Amleth  – played as an adult by Alexander Skarsgård – has become a fierce Viking warrior, but his thirst for revenge continues to burn, and when he learns that Fjölnir and family have relocated to Iceland, he disguises himself as a slave to slip into their orbit undetected. En route, he meets another slave, Olga of the Birch Forest (Anya Taylor-Joy), who senses a common cause. “You have the strength to break men’s bodies,” she tells him. “I have the cunning to break their minds.” And so, with her by his side, he begins his kill-crazy rampage.

Eggers – who knows from creating specific, indelible moods – crafts The Northman as a sensory experience. The soundtrack is filled with pounding drums, screeching strings, and barbaric yawps, and every scene is somehow both gorgeously staged and shot while also muddy, bloody, and disturbing. (There is a scene with a head-butting that is truly, uniquely horrifying.) With the invaluable assistance of cinematographer Jarin Blaschke and production designer Craig Lathrop, he fills the frame with imagery that fuses the aesthetics of nightmares, bad trips, and ‘80s custom-painted vans.

Also worth noting is the breathless fluidity of the fight choreography. These battles are frequently done in long, seemingly unbroken takes, but never in a manner that seems like showing off; it seems less like a flourish of the camera than an acknowledgment of the athleticism of the performers, and capturing their movements without edits feels, as in a dance sequence, to be properly respectful of their grace. But he also doesn’t completely aestheticize the violence, thanks to a thoroughly upsetting scene of a battle’s aftermath, a dramatization of the “raping and pillaging” we so often hear about, but that encompasses a savagery that most epics tastefully skip – village burned, women and children sorted out for abuse and slaughter, and so forth.

Eggers and Sjón match that ferocity with the blunt poetry of the dialogue; their screenplay is filled with lines that could play like epigrams or clichés, but rarely do. “We thirst for vengeance, but we cannot escape our fates,” is one refrain; another is Amleth’s character-defining “My heart knows only revenge.” Given such laser focus, it’s difficult to carve out much of a nuanced character, and the picture’s main flaw is that it gives us so little of him to latch on to (and as a result, the romance between Amleth and Olga feels especially perfunctory). But he more than adequately fills the physical requirements of the role, and one of the film’s most pulse-quickening pleasures is the graceful, almost catlike way Skarsgård moves across the screen.

Taylor-Joy continues to carve out a place as a singular screen presence, which is particularly noteworthy considering her short span of stardom (“The Witch,” lest we forget, was merely 2015). Young actors can seem interchangeable these days, but it’s impossible to imagine anyone else in any role she’s played, and this one is no exception. Kidman plays what seems a typical role for her in typical Kidman fashion, a savvy and sly choice that makes the turns of the third act land with particular oomph. And Bang is a delightful and dastardly villain, which makes their final confrontation especially satisfying.

Throughout “The Northman,” Amleth despairs of the choice between “kindness for my kin, and hate for my enemies.” It’s a basic binary, but never that simple, and while there’s not much room for profundity in a film of such brute force, it becomes a pointed and (yes, somehow) relatable choice. There is not, at the end of the day, room in one’s heart for both, and Eggers’ film has much to say about the demons that drive such a choice. He’s a filmmaker of supreme confidence and skill, and this is one hell of a motion picture.

“The Northman” is in theaters Friday.