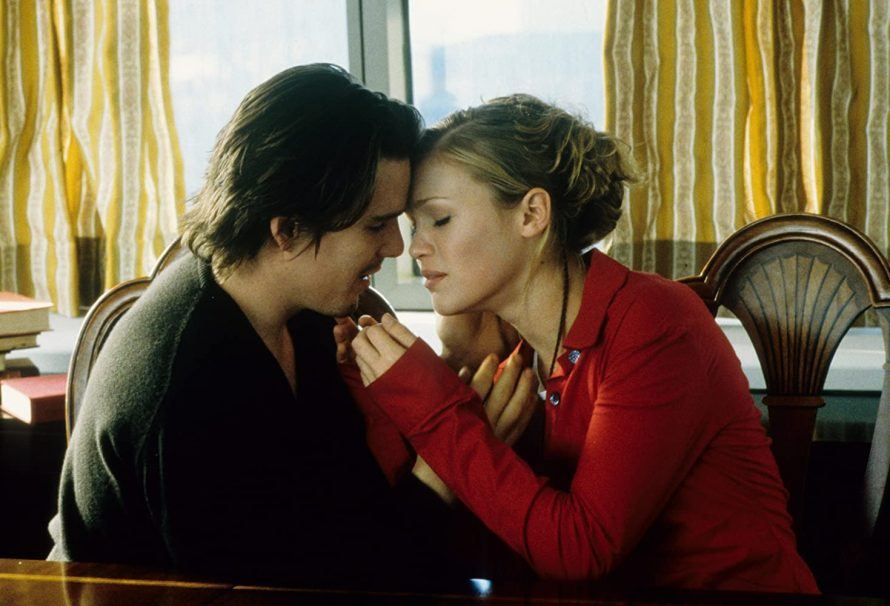 The Shakespeare adaptations of the 1990s and early 2000s are unified by an excess of style, and by a series of big risks. The nightmarish bleakness of Julie Taymor’s Titus, the MTV surrealism of Baz Luhrmann’s Romeo + Juliet, the earnest romanticism of Gil Junger’s 10 Things I Hate About You—even a purist like Kenneth Branagh was making waves with more inclusive casting, adding Denzel Washington and Keanu Reeves to his Much Ado About Nothing, making possibly the sexiest ensemble ever assembled.

And yet no one was quite doing it like Michael Almereyda. His Hamlet dared to transplant Shakespeare’s tale of royal betrayal, incest, and madness from a castle in Europe to the boardrooms, laundromats, and Blockbuster video stores of New York City. At stake was not a Danish kingdom threatened by nearby Norway, but a capitalist empire infringed upon by an enemy company. Was this the first—and only—time JNCOs appeared in a Shakespeare adaptation? Probably! (A thesis could be written about Julia Stiles’s array of urban-influenced and SoCal-inspired outfits in Hamlet, 10 Things I Hate About You, and O; in this era of Shakespearean films, Stiles was giving Delia’s quite a bit of free advertising.)

Almereyda’s updates divided critics back in 2000: Roger Ebert was in the film’s corner with a three-star rating, while others called the film’s deluge of tech a gimmick. Twenty years later, it’s fascinating how many of those then-modern updates—fax machines, floppy disks, video diaries!—are recognized with a jolt of affectionate nostalgia now. So much of what made Almereyda’s Hamlet of its time now feel lost to time: Blockbuster, of course, but also Moviefone, Pepsi One, the way Ethan Hawke’s Hamlet just staggers around an airplane unchecked, the respect given to USA Today, and, of course, those JNCOs.

Taken together, those elements might make Almereyda’s vision impenetrable to viewers of a certain age; perhaps Generation Z wouldn’t find replacing Ophelia’s (Julia Stiles) bouquet of flowers with Polaroids of those plants quite so clever. But so much else of Hamlet still holds up —in particular Hawke’s self-loathing, bitterly jealous Prince of Denmark, Sam Shepard’s version of his deeply displeased, undead father, and Almereyda’s incorporation of other pop culture figures of tragedy and revenge. In fact, the outdated nature of Almereyda’s details actually gives the core story an additional layer of power. A father murdered. A son overwhelmed by a desire for blood. The bodies left in the wake of usurper and avenger alike. The cyclical decay of Hamlet still resonates, even as its ‘90s flourishes have become increasingly irrelevant.

Hamlet places us in Almereyda’s chosen setting—New York City, 2000—with a series of bright yellow intertitles that explain “the King and C.E.O. of Denmark Corporation is dead,” “the King’s widow has hastily remarried his younger brother,” and “the King’s son, Hamlet, returns from school, suspecting foul play…” Our perspective is the inside of a limo, shooting through its sunroof, the intertitles on top of our view of the New York City skyline. Gargantuan buildings. Ads for Miss Saigon, Panasonic, and the Denmark Corporation, with an orb logo in stripes of pink, orange, and white. A gigantic billboard for a Kevin Costner movie wraps around one edge of a building, and another for a Clint Eastwood film takes up the opposing side. And in the middle of downtown sits Hotel Elsinore, the headquarters of the Denmark Corporation, where twentysomething Hamlet’s apartment is messy, disorganized, strewn about with liquor bottles and video cases. At his desk, two large monitors and a camcorder, surrounded by pictures of Ophelia, various abstract Polaroids, and that famous black-and-white portrait of revolutionary Che Guevara.

Into that grainy camcorder, his face pixelated and blue-tinged, Hamlet admits his grief over his father’s death; the film will switch often between Hamlet’s admissions and observations, his narration guiding us forward in certain scenes, and more straightforward, third-person filmmaking, where we remain at a remove from our protagonist. “What a piece of work is a man? … How like an angel in apprehension? How like a god?” Hamlet wonders, and the film answers his question by moving swiftly toward his reunion with his father, now a ghost. In his full-length black leather jacket, collar turned up against a nonexistent wind, still wearing his wedding ring, Shepard is an imposing figure, so unexpected that he shocks his son into silence. Brusquely and bracingly, the former king tells his son what happened: His younger brother Claudius (an excellently devious Kyle MacLachlan) poisoned him, then immediately wooed his widow, Gertrude (Diane Venora), marrying her less than two months after the funeral. The first time we see Shepard in the film, he’s a portrait in a boardroom, his visage placed over Hamlet’s shoulder as he watches Claudius brag about fending off corporate rival Fortinbras (Casey Affleck). Now, simultaneously solid and ethereal, Hamlet’s father urges him to put aside “the trappings and the suits of woe” and instead exact bloody vengeance. “Remember me,” Shepard implores, pushing his son up against a wall before returning for an embrace. Hawke sells the interaction beautifully, his face a mixture of awe, anger, longing, and fear—emotions this Hamlet will return to over and over again as he drives away his lover, betrays his friends, interrogates his mother, and plumbs his own self-hatred to motivate himself toward revenge.

Almereyda chops away a significant portion of Shakespeare’s original text, allowing Hawke to put his own Reality Bites spin on the young prince. In his too-small ski hat, chunky orange-tinted sunglasses, and hair in a poufy disarray, Hawke scoffs and sneers, his constant disgruntlement ostracizing everyone around him. That’s not to say that the film makes Hamlet a caricature; rather, Almereyda expands our understanding of the character by bringing in outside figures to compare with our prince. Hamlet watches the Vietnamese peace activist and Buddhist monk Thích Nhất Hạnh in a news interview, speaking about how “It’s not possible to be alone, to be by yourself. You need other people in order to be.” When Hamlet practices his “to be or not to be” soliloquy in his camcorder, he perverts Nhất Hạnh’s nonviolent teachings by holding a gun to his head, putting it inside his mouth, and below his chin, pantomiming his own suicide. Inside a Blockbuster, he wanders the aisles, expanding his speech, wondering “what dreams may come.” Playing on a trio of screens in the video store is The Crow: City of Angels, in which Vincent Pérez’s Ashe Corven comes back to life on All Saints Day to avenge his own murder and that of his son. Later, in his apartment, Hamlet watches Rebel Without a Cause, starring the tragically killed James Dean, and the classic Laurence Olivier version of Hamlet, during the “Alas, poor Yorick!” speech. A veritable cadre of ghosts, all haunting Hamlet, all reminding him of what, and who, the prince has lost.

About halfway through Hamlet, some of what Almereyda removed from the play drags the film: Gertrude and Ophelia remain especially flat, the tension between Hamlet and Claudius feels hastily ramped up, and Hamlet’s short film The Mouse Trap, meant to implicate Claudius in his brother’s death, seems more art-school amateurish than maliciously sharp. But that doesn’t detract from the filmmaker’s steady interrogation of who Hamlet is, and how the world of surveillance in which he lives complicates his performances of his various selves. In Hotel Elsinore, in a hallway lined with mirrors reflecting Hamlet’s image on practically every surface, he’s captured on security footage arguing with and threatening Polonius (Bill Murray)—Hamlet acting as the madman driven wild by love for Polonius’s daughter Ophelia. Knowing that he’s being spied upon by his former friends Rosencrantz (Steve Zahn) and Guildenstern (Dechen Thurman), who are working for Claudius, he mentions to them that he’s plagued by “bad dreams”—Hamlet acting as the grieving son wrecked by his father’s death. When Hamlet receives a fax challenging him to a duel from the enraged Laertes (Liev Schreiber), who blames the prince for both his father Polonius and sister Ophelia’s deaths, Hamlet sees his father’s ghost, watching him from the hallway. “Let be,” Hamlet says, accepting the possibility that he might die by Laertes’s hand—after he assumes the responsibility of retaliation, he never sees his father’s ghost again.

With his dying breath, Hamlet tells close friend Horatio (Karl Geary) “to tell my story,” but the film’s final moments do not give that power to the sole survivor of the rooftop-duel-turned-massacre. Instead, a broadcaster reads the news off a teleprompter that Fortinbras is “Denmark’s new king,” a smooth transition from one overlord to another. “Our thoughts are ours, their ends none of our own,” the news anchor solemnly says, a warning against violence and a plea for temperance, but then Almereyda shows us the monitor from where he read that text. Another performance given to another watching camera, the sincerity behind it questionable.

The space Almereyda tries to find between authenticity and artifice, between confession and obfuscation, is what sustains Hamlet, and those dualities remain recognizable decades later. Strip away the ‘90s signifiers and our nostalgia for them—Hamlet’s chunky laptop, Ophelia’s darkroom, and the many instances of feather boas as accessories—and what remains are Hawke’s rawness and Shepard’s weariness, Almereyda’s cynicism regarding corporate competition, and the relentless unsentimentality of the original text. Of the slew of stylish Shakespeare adaptations of its time, Almereyda’s Hamlet may have aged the most noticeably, but that’s only if you accept the film’s surface layer. Look deeper, and the disillusionment at its core still captivates.

Bombshell and the Exploitation of Young Starlets

How Babe Snuck Radicalism into a Family Favorite