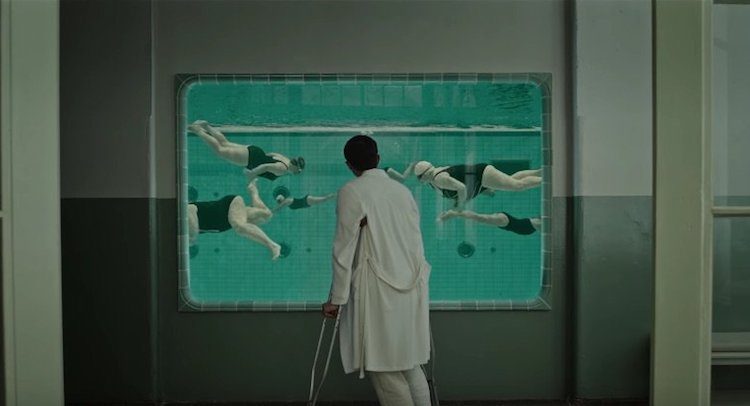 Gore Verbinski has directed three Pirates of the Caribbean movies and The Lone Ranger, plus The Ring, Rango, and Mousehunt, as well as under-seen gems The Mexican and The Weather Man. With such a varied resume that includes remakes and adaptations, it’s hard to pin down Verbinski’s own aesthetics. What is HE interested in?

I’ve always hoped it was horror, if only because The Ring is great and the man’s first name is Gore, but maybe I was right. His tenth film, A Cure for Wellness, is a gothic thriller full of horror symbolism and a creeping sense of the sinister, and Verbinski is co-credited with the story. (The only other film he helped write was Rango.) There are images here as starkly unsettling as in The Ring, albeit without that film’s nightmarish crescendo or tight pacing, and Verbinski squeezes all the mystery he can out of Justin Haythe’s screenplay, which adorns its elemental story with morbidly colorful details.

Dane DeHaan (whose resemblance to Leonardo DiCaprio makes this film more reminiscent of Shutter Island than it would be anyway) stars as Lockhart, a young Wall Street hotshot who’s already chomping Nicorette gum like a veteran, dark bags under his ghostly blue eyes. Lockhart is sent to an exclusive Swiss spa to retrieve his firm’s CEO, who went there to “take the waters” and is now refusing to rejoin society.

Many titans of industry can be found at this idyllic spot in the Alps, taking various treatments for their various ailments, most of which are attributable to the fact that they are titans of industry who are working themselves to death. The head of the facility, Dr. Volmer (a keenly untrustworthy Jason Isaacs), is cagey about the details of his methods, and the eerily polite staff is well trained in making it difficult for visitors to see patients. Frustrated, Lockhart is about to try plan B when he’s injured in an accident and becomes a patient himself. All the better to snoop around, right?

Mystery abounds at the sanitarium. An old patient named Mrs. Watkins (Celia Imrie) cuts out pieces of crossword puzzles and tells Lockhart, “There is a terrible darkness here.” He hears legends about the institute’s weird, incestuous founder, whose motto — “Purity Before Wellness” — is posted on Dr. Volmer’s wall. Lockhart meets Hannah (Mia Goth), a spacey young woman who seems to be in a trance most of the time, whose information about the facility and its guests is unreliable. Lockhart’s own mental acuity starts to fail him, too, after he consents to some of Dr. Volmer’s treatments (when in Rome and all that).

The spa is even more ominous when seen through the fog of paranoia and “vitamins,” and Verbinski plays up these elements with gusto. Some details — a cow abortion, an abundance of eels, a missing tooth — have an arbitrary logic that’s either disturbing (that’s how nightmares work, after all) or annoying (that’s also how lazy horror movies work). But either way, the images are indelible.

Unfortunately, DeHaan seems in over his head as Lockhart. The actor is 31 but looks younger and naive; it’s hard to buy that he’s a workaholic, or that his firm would entrust him with such an important mission. I kept imagining what the film would be like with a more experienced, world-weary protagonist — or at least one who would LEAVE THE SPA when its dangerousness became obvious. Maybe Lockhart finds the facility’s bleak, disquieting backstory and horrific current events as compelling as I do. Is he also disappointed, just a little, at the unsurprising nature of some of the mysteries’ solutions? You expect more bang at the end of 146 minutes, even if the time spent was satisfyingly disturbing.

Biopic of the Beast: Oliver Stone’s Nixon at 25