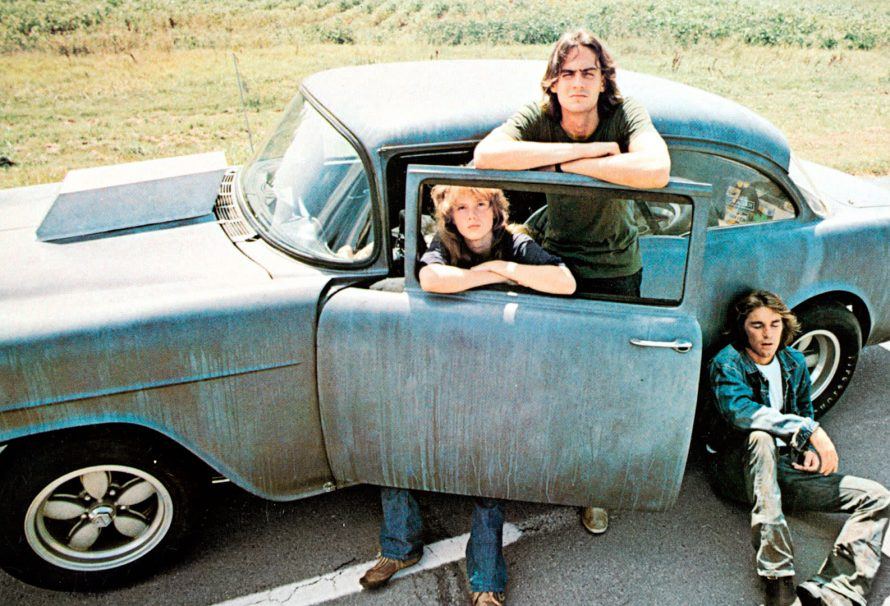 Pop stars taking dramatic roles in feature films date back at least to the 1940s, when Frank Sinatra brought his boyish charm and beautiful singing voice to movies like Step Lively and Anchors Aweigh. Casting a rock star—whether they’re a high-profile vocalist for a big band or the charismatic drummer for a rock group—makes sense on a business level, since movie tickets are less expensive and easier to get than concert tickets. In many cases, rock stars have a rougher screen presence than their actor counterparts, which can translate into more immediate and emotionally direct performances. Plus, the mythos of a musician’s personae can play into the character and narrative, and give a role an interesting meta quality.

Monte Hellman was one of the first directors of the New Hollywood era to try casting for box-office gold with rock stars. The leads of his 1971 feature Two-Lane Blacktop, James Taylor and Dennis Wilson, had reached varying degrees of success as musicians. Taylor’s second solo album Sweet Baby James, a collection of heartbreaking, redemptive new American standards, had been released not long after Hellman secured financing for the film; Wilson was a familiar presence to many rock-and-roll fans as the drummer for—and the only surfer in—the Beach Boys. In the 50 years of Two-Lane Blacktop’s existence, Taylor’s and Wilson’s public images have evolved and complicated, and their personae bring an additional metanarrative layer to the only film in which they acted.

James Taylor was the first to be cast. “I saw James’ picture on a billboard on the Sunset Strip and asked to have him come in and do a screen test,” Hellman told the Austin Chronicle in 2000. The cover art for Sweet Baby James depicts the handsome troubadour in a contemplative, slightly wounded moment, and with his angular bone structure and big, sad eyes, you can see why Hellman “flipped over his face”. At the time, Taylor’s second album had been released but had yet to find its audience. In some circles his reputation as a heroin addict and a boyfriend to a string of high-profile Laurel Canyon singer/songwriters preceded him.

Taylor’s performance works best in the contemplative moments that seem like an extension of the Sweet Baby James cover. His wide strides and slouchy posture anchor the washed-out wide shots in New Mexico. Hellman uses Taylor’s arresting gaze well in a series of close-ups, in particular a shot towards the end of the film where his unnamed character sits in the driver’s seat of his Chevy 150. In his unblinking focus and hangdog facial expression, you can feel the weight of everything that brought him to this point. Unfortunately, the compelling aspects of his performance evaporate every time he opens his mouth. Taylor’s monotonous, rapid-fire cadence, shot through with a slight Boston accent, has an effective passive-aggressive provocation in an early scene where he challenges another drag racer to a race. This speaking style has a fidgety quality in other scenes, suggesting that Taylor was more invested in learning his lines and avoiding a car accident than he is in giving a performance.

When Marc Savlov asked Monte Hellman why he cast Dennis Wilson, the director’s answer was simple. “I think just that he had lived that role, that he really grew up with cars,” he answered in 2000. “It was almost as though he were born with a greasy rag in his back pocket.” Wilson brought an appealing spontaneity to his performance, as though he had just wandered onto the set and acted the way he would act if he weren’t on camera. In contrast with Taylor’s nervous, stilted performance, Wilson’s line readings sound fresh and improvised, and his flirtation with actress Laurie Bird plays as endearingly understated.

To contemporary viewers, it’s hard not to read a sense of relief into the lightness of Wilson’s performance. The Beach Boys were known to music fans everywhere for their tightly arranged music and clean-shaven image, and Wilson’s shaggy sideburns and frequent shirtlessness comes off like a retort to his band’s wholesome persona. Today, Wilson has some notoriety as the member of the Beach Boys who championed Charles Manson’s songwriting, rewriting the murderer’s song “Cease to Exist” as “Never Learn Not to Love”, only to eventually get a death threat from Manson. With the Tate/LaBianca murders fresh in the national memory at the time the film was made, Wilson’s performance in a film about being on the run has an eerie sense of urgency. (When Wilson removes the license plates from his car because “I don’t want anyone to find me,” Manson’s threats to the drummer immediately come to mind.)

The botched release of Two-Lane Blacktop—with its early critical acclaim, studio interference, years of unavailability, and eventual rank in the canon—followed the cult film standard. Viewed today, it’s a fascinating example of what rock stars can bring to the smallest and most intimate of cult movies.

Chelsea Spear is returning to arts writing after spending a few years correcting other people’s grammar. Her byline has appeared at the Brattle Theatre’s Film Notes blog and in the pages of The Gay & Lesbian Review. She lives in Boston.