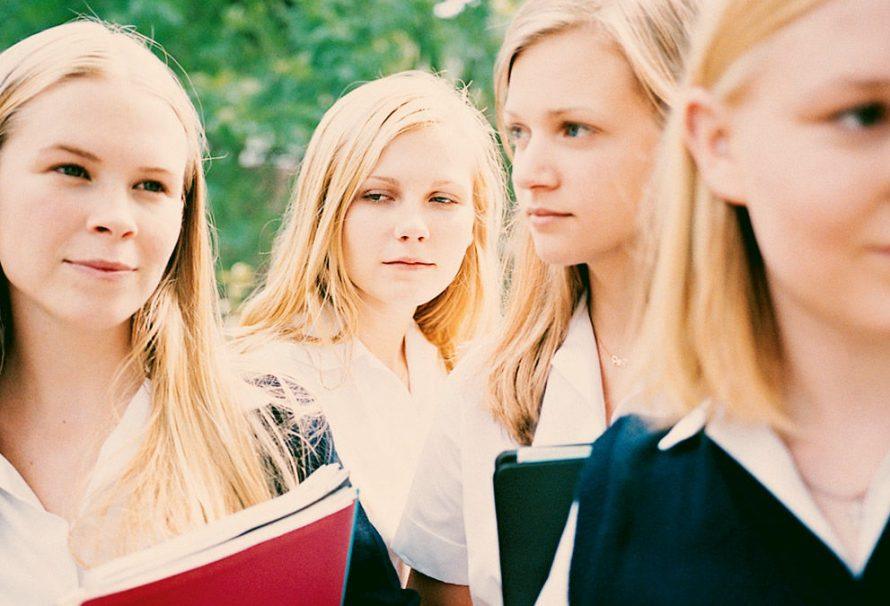 Sofia Coppola’s career is nearly universally concerned with the unspoken loneliness of womanhood, and her directorial debut, The Virgin Suicides, often feels like a partially grasped memory or a half-forgotten dream. Her 1999 adaptation of Jeffrey Eugenides’s 1993 novel is hazy and sun-kissed, with imaginative cinematic flourishes that transform the film’s central sisters into more than mythic tragedies. A glimpse into the murky unknowability of adolescence, Coppola’s The Virgin Suicides communicates to viewers, as Giovanni Ribisi’s narrator observes, “the imprisonment of being a girl”—and the feature’s cinematic legacy is tied to the portraits of femininity with which Coppola has crafted her filmography.

“Cecilia was the first to go” is the first line of The Virgin Suicides, which in its opening moments captures the comfortably slow-moving domesticity of a Michigan suburb. A teenager waters a riotously green lawn; a family walks their dog; sunlight filters through the rustling leaves of swaying trees—and a smirking teenager stands in the street eating a popsicle, the embodiment of summertime Americana. Coppola gives us that split-second introduction to Lux Lisbon (Kirsten Dunst, who would become a regular Coppola collaborator), charming and beguiling, before smash-cutting to the home in which she and her sisters are trapped. The golden glow of the outside sun doesn’t penetrate into this prison of flat white walls, dusty beige carpeting, and outdated taupe furniture. The only color to be found here is the rich red blood flowing from the wrists of Lux’s younger sister, 13-year-old Cecilia (Hanna Hall), who we see after she attempts to take her own life—and who we know, thanks to Ribisi’s narration, will eventually succeed.

Coppola grounds us with Cecilia and then broadens our scope, introducing first Cecilia’s family (the parents who didn’t understand her; the sisters who would eventually follow in her footsteps) and then the neighborhood boys who loved the girls: Chase (Anthony DeSimone), Tim (Jonathan Tucker), Parkie (Noah Shebib), and David (Lee Kagan). The boys’ observations of and theories regarding the Lisbons are channeled through the film’s unnamed narrator, voiced by Ribisi. “The evidence,” the narrator calls it, but all of it—Cecilia’s stolen journal, photo albums pilfered from the trash, memories the boys have of spying on the girls through their telescopes and binoculars—doesn’t add up to much. Decades later, the boys are still puzzling over what happened to youngest Cecilia, 14-year-old Lux, 15-year-old Bonnie (Chelse Swain), 16-year-old Mary (A.J. Cook), and 17-year-old Therese (Leslie Hayman), the cluster of daughters born to the very Catholic and very strict Mr. Lisbon (James Woods) and Mrs. Lisbon (Kathleen Turner). The Lisbon home is like a shrine to the girls, and also a tomb. Their baby booties, encased in rosy bronze, lay on a table in the foyer. Their middle and high school portraits line the wall along the spiral staircase. The sisters attend the private Catholic school where Mr. Lisbon is a math teacher and return home every afternoon to the house where Mrs. Lisbon is the primary disciplinarian. No phone calls. No parties. No sleepovers. No driving in cars. And, not under any circumstances, no boys.

With those limitations in place, the girls turn to each other. The most clearly developed are Cecilia (worried about the environment, endangered species, and the elm trees in their town that are dying from a European fungus; enamored with collecting images of the Virgin Mary) and Lux (flirtatious, rebellious, spontaneous; a girl aware of her beauty and the fact that boys and men alike will respond to it). But all five of the girls often act as a unit. In their bedrooms or on the couch, they pile onto each other, a mess of sprawled-out limbs. Their boxes of tampons all share residence in an upstairs bathroom closet. Mrs. Lisbon dresses them in matching outfits, like children far younger than their teen years, and so even their silhouettes—long hems, long sleeves, baggy busts—are alike. They share inside jokes, they decorate hand-written greeting cards together, they are all suffering in the same way. When Danny DeVito’s psychiatrist character Dr. Horniker asks Cecilia after her suicide attempt, “What are you doing here, honey? You’re not even old enough to know how bad life gets,” Cecilia’s response taps into what she’s feeling, and what Lux, Bonnie, Mary, and Therese felt before her: “Obviously, Doctor, you’ve never been a 13-year-old girl.”

It’s the stifling nature of that environment—and how it has fashioned the girls into both individual and collective mysteries—that puzzles their male classmates, and so The Virgin Suicides is also shaped by how Chase, Tim, Parkie, and David perceived the Lisbons then and remember them now. Coppola analyzes the male gaze while allowing her film to be guided by it, and regularly includes scenes of the boys adoring the girls while only very rarely treating them like people. Chase introduces himself to Mary at their lockers, although she obviously knows who he is—they’ve gone to school together their entire lives. Tim asks Therese if she’s heard of Yale, as if being disallowed from seeing boys means she knows nothing about the outside world. In these scenes, we roll our eyes at the boys alongside the Lisbons, and Coppola underscores the girls’ humanity while also gently ribbing the boys for their infatuation, and their superficiality. This is most clear as the boys lust for Lux and objectify her, too, keeping track of her nighttime trysts with random boys and men on the Lisbons’ roof. They all know that things for the Lisbon girls got worse after Lux lost her virginity to their high school’s It Guy, Trip Fontaine (Josh Hartnett), and broke curfew by staying out all night after the Homecoming Dance, but they don’t consider how Lux is suffering. They’re attracted to her forwardness, to her spaghetti straps and knowing winks and untroubled mixture of budding sexuality and milk-fed wholesomeness, but they don’t consider who she might be outside of their own fantasies.

It is in these considerations of what the boys remember, what they fictionalized, and what they tracked down over time about the Lisbons that Coppola makes space for technical experimentation in The Virgin Suicides. So many of these flourishes feel youthful, but not juvenile—like Coppola is adding the same embellishments a teenage girl, doodling in the margins of her notebook, would incorporate. (In fact, we see this particular effect when the girls are introduced: each sister in freeze-frame, with their names in girlish script next to their faces.) When the boys read Cecilia’s journal, swiped from the Lisbons’ bathroom after her suicide, the sisters’ faces dissolve over puffy clouds in a bright blue sky and over golden fields of wheat. The girls are made gigantic in the boys’ imaginations, their outsize physicality matching their admirers’ obsession. When Trip—popular, handsome, and adored, as these more Freaks and Geeks-type boys aren’t—sees Lux for the first time and falls for her immediately, it’s thanks to a literal twinkle in her left eye. Later, when Trip picks up Lux for the Homecoming Dance, Coppola pans down her dress and lets us see through it, to where Lux has scrawled Trip’s name in black marker on her pink cotton underwear. And finally, when the film indulges in an unexpected flash forward to Trip in a rehabilitation center, recounting how “I never got over that girl. Never,” Coppola makes clear how long these boys have stayed fixated on the Lisbon girls, and how far-reaching the impacts of their lives and deaths are.

When The Virgin Suicides was released, detractors worried that the film’s presentation of the Lisbon girls flirted with idolatry: that how often the girls were presented as gorgeous, Ophelia-like figures who were haunting the boys, and whose suicides made them infamous, was akin to a behavioral stamp of approval from Coppola. But 20 years later, those concerns still feel like they’re focusing on the wrong part of Coppola’s narrative—in the same way that Chase, Tim, Parkie, and David keep looking for answers about the suicides in the scattered detritus of the girls’ lives. What matters more than the why of their deaths, Coppola makes clear in The Virgin Suicides, is the what of their lives—of the places they wanted to visit, of the friends they could have made, of the love they had for each other. The narrator puts it best when he admits what the boys learned about the Lisbons, first in their presence and then in their absence:

“We felt the imprisonment of being a girl, the way it made your mind active and dreamy, and how you ended up knowing which colors went together. We knew, finally, that the girls were really women in disguise, that they understood love and even death, and that our job was merely to create the noise that seemed to fascinate them. We knew that they knew everything about us, though we couldn’t fathom them at all.”

There’s a certain level of self-aggrandizement happening here, of course, with the boys considering that they were important enough to the girls to warrant such attention. But what Coppola does with that observation is make plain the “imprisonment of being a girl,” with the myriad contrasting expectations and assumptions placed upon young women. The Lisbon girls’ parents were devoted to controlling them, not knowing them; Trip wanted to conquer Lux, and left her behind after he did; even the neighborhood boys, who grow up to matter-of-factly say that their own wives pale in comparison with the Lisbon girls, wanted to be the sisters’ saviors more than they wanted to be their friends. Only Therese, Mary, Bonnie, Lux, and Cecilia truly understood each other, and in the span of a year, fulfilled a pact that no one outside of their shared experience could ever comprehend.

Coppola would spend the rest of her career scrutinizing how femininity blossoms or withers in closed-off or exclusive spaces, with all of her films carrying similar themes to The Virgin Suicides. A lonely American tourist and abandoned wife in Lost in Translation; a young monarch increasingly spoiled by and ignorant of the changing political environment around her in Marie Antoinette; a teenage daughter yearning for the attention of her fading movie star father in Somewhere; the fame-obsessed, party-loving criminals of The Bling Ring; the petty jealousies and desperate sexual frustrations of Civil War-era Southern women living in a girls’ school in The Beguiled.

Coppola’s focus is sometimes mocked for its specificity—often young, often rich, nearly always white women—but her intentions have always been to provide a glimpse into a feminine perspective that is frequently overlooked or brushed aside. “Goodbye, cruel world. You don’t understand me. I’m just a teenager. I got problems,” says a grown man after purposefully falling into a swimming pool at a debutante party the boys attend after the Lisbon sisters’ deaths, and they’re disgusted by his mockery. The Virgin Suicides wants us to feel that resentment, too—to recognize that the Lisbon girls were more than a punchline, more than a fantasy, more than a mystery. All women are.

“The Virgin Suicides” is streaming on Amazon Prime.

What We Can Learn from the Scorsese Shorts