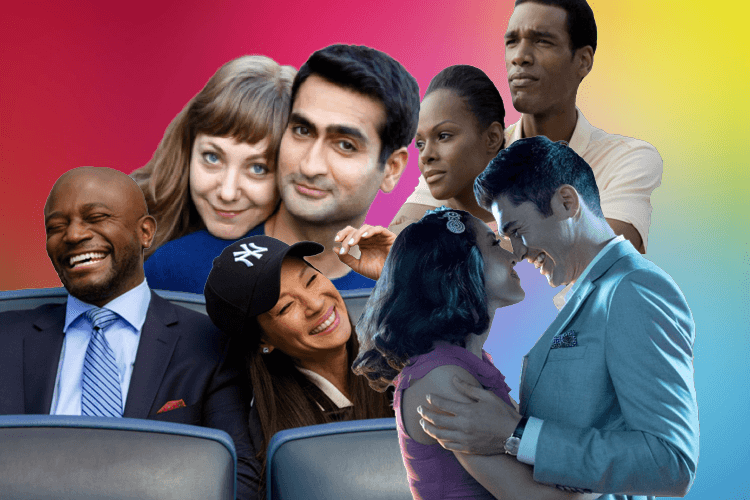 I’ve loved rom-coms my entire life, somehow able to separate their regressive values from my general disdain for the patriarchy. Writers have rightfully spearheaded feminist critiques when discussing this genre, calling out its thin female protagonists and sexist jokes. But many ignore the other elephant in the room: The romantic comedy genre is so white that whiteness hides in plain sight. Over the years, it eventually died, buried in its outdated traditions around gender and race.

But thanks to the efforts of independent studios, the romantic comedy genre is making a comeback. It’s undergone a makeover, retiring the blatant sexism of its recent past. Filmmakers still utilize good-hearted comedy and familiar plot devices, but allow their main female characters to be more than the objects of pursuit. Additionally, prominent cast members are no longer only white. In such recent rom-coms as Crazy Rich Asians, Southside with You, The Incredible Jessica James, Everybody Loves Somebody, The Big Sick, Half Magic, and Set It Up, we see more people of color in leading roles as well as in significant supporting parts.

People of color have been appearing in headlines about immigration reform, refugee bans, police brutality, and the casual racist rhetoric of the current administration. While these harsh realities and their historical roots must be acknowledged, they often come with the burden of limiting representation in fictional work. The American film industry has created space for minorities in its casts by relying on flimsy stereotypes, gratuitous trauma, and depthless representation. As a consequence, minorities get mythologized as heroes, victims, or nobodies in movies. One needs to look no further than Long Duk Dong in Sixteen Candles to find an example.

Romantic comedies show us the possibility of love and good humor in a time of hopelessness. But love, the complicated, messy, fluffy kind, isn’t devoid of social context or exclusively meant for white people. Slowly, Hollywood’s major studios are catching wind of this. The romantic comedy genre has retired bumbling cads and manic pixie dream girls for more fully realized characters, whose cultures are defining rather than decorative elements in their romances.

If you haven’t already heard, Crazy Rich Asians is one of the biggest romantic comedies of the year. It’s the first film from a major U.S. studio to feature a predominantly Asian-American cast since The Joy Luck Club, 25 years ago. In the movie, humble economics professor Rachel Chu (Constance Wu) unknowingly falls in love with one of Singapore’s richest heirs, Nick Young (Henry Golding). The film does not dramatically change the setup of the romantic comedy, hitting on familiar beats like the shocking reveal of one partner’s relationship-changing secret and the dramatic proposal. Plotwise, it isn’t a radical movie. Crazy Rich Asians is aware of the fact that it’s a retelling of Cinderella. What strikes me as refreshing is the film’s depiction of family.

From graphic novel American Born Chinese to TV sitcom Fresh off the Boat, family has been an enduring theme in Asian-American work. The patriarchal underpinnings of Asian family values are especially prominent in Crazy Rich Asians. These traditional beliefs affect how the women in the film — Rachel, Nick’s mother Eleanor, and his cousin Astrid, in particular — carry themselves. All three women are highly educated and intelligent. But Eleanor (Michelle Yeoh) and Astrid (Gemma Chan) do not flaunt this part of themselves, facing pressure from friends and relatives to be doting mothers and good wives. When shamed by their family, they bite their tongues. On the other hand, Rachel, raised with no knowledge of her father, has never kept a part of herself back to build a man. Learning that Nick may need to stay in Singapore to run the Young developing business, she understands that she has a choice to leave him rather than signing up to be his devoted business partner.

In a similar vein, family plays an important part in The Big Sick, driving the narrative tension of the film. The movie, based on writer and actor Kumail Nanjiani’s actual relationship with his wife, taps into the conflict between Kumail’s Western values and his parents’ traditional views. They want him to marry a Pakistani woman when he’s really in love with a white woman named Emily — drama ensues. Their culture is not so much background noise as it is the pillar that grounds the plot.

Themes of family and culture that surround characters of color can add depth to a rom-com. But also important are movies where actors of color can take on meaningful roles without having to represent their culture. In Netflix’s Set It Up, Lucy Liu and Taye Diggs portray two sharp-tongued bosses who come together after getting set up by their exhausted underlings. Liu plays a powerful and often hilarious sports editor while Diggs portrays a venture capitalist with boorish frat-boy tendencies. Both actors have a degree of depth and personality to play with, as opposed to being bound to Asian and black stereotypes. Their characters might not carry the beacon of nuanced racial diversity, but they’re undoubtedly thought-out.

Richard Tanne’s  Southside with You (2016) doesn’t shy away from the fact that its protagonists — Barack Obama (Parker Sawyers) and Michelle Robinson (Tika Sumpter) — are black. The film portrays the beloved Obamas on their first date (non-date, according to Michelle) with a gentle comedic push. The characters bond over a Spike Lee movie, Ernie Barnes exhibit, and community organizing meeting. At one point in the film, Michelle even asks, “How is it going to look if I start dating the first cute black guy that walks through the firm’s doors? It’s tacky.” Of course, the future president replies, “You think I’m cute?”

The rom-com is back, and it’s here to stay with more color. This holiday season, Jennifer Lopez, a powerful Latina presence in Hollywood, will be making her rom-com comeback in Second Act, starring opposite TV-certified dad Milo Ventimiglia. We’re also seeing more Asian-American leads in movies such as To All the Boys I’ve Loved Before and Always Be My Maybe. As an Asian woman, I admit the trend is encouraging, since I never expected anyone who looked like me to star in a rom-com. If anything, I would have half-expected casting directors to give those roles to Scarlett Johansson or Emma Stone.

Like Hugh Grant said in one of his most iconic romantic comedies, if you look for it, you’ll find that love actually is all around — not just limited to people who look like Meg Ryan and Tom Hanks. Rom-coms provide much-needed warmth and light in these dark times, but they don’t need to be escapist fantasies that bear little resemblance to the real world. They should continue to show audiences the reality that love comes in different colors.