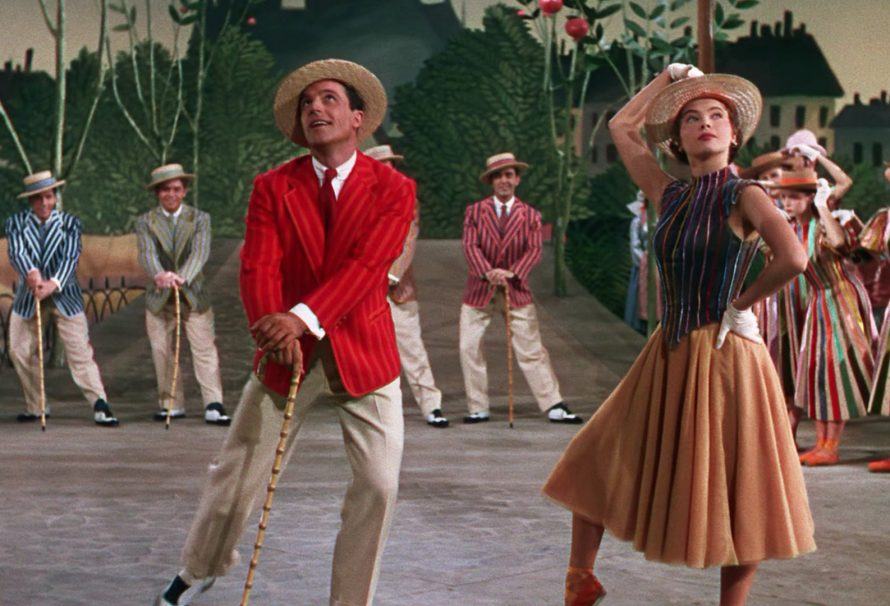 We’ve all been there. You’re watching a zippy, well-paced, mid-century movie musical, and then all of sudden, out comes the dreaded ballet sequence to bring everything to screeching halt. This is the so-called “dream ballet,” which was popularized on stage by choreographer Agnes DeMille and later frequently used in musicals throughout the 1950s and 1960s. Gene Kelly was especially fond of these interludes, as we see in Singin’ in the Rain and, most notably, An American in Paris, building extravagant set pieces that would allow him to fully execute his vision. They have no dialogue or lyrics, instead relying entirely on the medium of dance to construct a narrative often separate and isolated from the larger story. And although they are creatively ambitious and athletically impressive, they almost always have the unique side effect of crushing any momentum the film built to that point. They operate as an opportunity to visually rehash elements of the plot, but since the audience already watched the film, they can come across as frustratingly redundant. These ballet sequences may be beautiful, but they’re also blatantly self-indulgent: far more for the performers themselves than they are for the audience.

At least in Singin’ in the Rain, there’s a wry sense of self-awareness to the extended ballet sequence. When Don Lockwood (Gene Kelly) is faced with the challenge of turning his painfully bad historical drama into a time travelling musical, he presents his ideas to the studio head R.F. Simpson (Millard Mitchell) in the form of a musical number. It’s the story of a young hoofer who goes to New York with dreams of a career on Broadway, and in the process crosses paths with a beautiful vamp (Cyd Charisse) romantically involved with a Mafia-type goon. Incredibly, there is a musical sequence within this musical sequence, as the modern party setting fades away, leaving Kelly and Charisse alone in an empty white space to perform an interpretive dance number.

This entire segment of the film, remember, has nothing to do with the plot of Singin’ in the Rain at all, except that the hero’s journey in the story-within-a-story is meant to mirror Lockwood’s own professional trajectory. It succeeds because Cyd Charisse is an incomparable performer, one who is able to capture hearts and minds with her mere presence. And it certainly helps that they go to great lengths to ensure that this sequence isn’t taken too seriously. After Lockwood spends an entire musical number, complete with painstakingly choreographed dance and high production values, detailing his vision, R.F. Simpson is unconvinced. “I can’t quite visualize it,” he says of the film sequence we’ve all just seen. “I’ll have to see it on film first.”

But the An American in Paris closing ballet sequence is something else altogether. Utterly convinced of its own brilliance, it lasts for an astonishing seventeen minutes, almost 15% of the film’s total runtime. In it, director Vincente Minnelli takes us through both a history of French impressionist artwork and the embattled relationship between Jerry (Gene Kelly) and Lise (Leslie Caron), the point of which, again, has been pretty well hammered home, since we already watched the rest of the film. Credit where credit’s due, the ballet sequence is unparalleled in terms of scale (it cost MGM half a million dollars to stage and required backdrops that were 300 feet wide) and it’s perhaps the most memorable part of An American in Paris. From a studio known for their extravagance in a decade when elaborately staged movie musicals were at their most popular, the ballet sequence stands out in a class of its own in terms of care and attention to detail.

But does that necessarily make  it a valuable addition to a well-structured narrative? It may be beautiful, and Gene Kelly and Leslie Caron may be an elegant pairing, but seventeen minutes is an awful lot of time to devote to a set piece that is a complete narrative aside. That it is so jarringly separate from everything else in An American in Paris makes sense: after principal filming was finished, Vincente Minnelli left production, filmed another movie, and then came back to direct this sequence. The production team envisioned this ballet to fulfill a variety of functions: to entrance moviegoers with visual spectacle; to introduce modern ballet as a dynamic art form to mainstream audiences that would convince them of both its vitality and virility in the hands of the masculine, all-American Gene Kelly; to neatly summarize the relationship between Jerry and Lise throughout the film; and to write a love letter to Paris, using Gershwin’s “An American in Paris” composition and the stylistic influences of impressionist painters such as Van Gogh, Renoir, Toulouse-Lautrec, and Rousseau.

Does it accomplish some of the goals? Unquestionably. But it’s difficult to watch the ballet sequence of An American in Paris and not wonder if it’s biting off a bit more than it can chew, and, more importantly, if its tendency towards pretentiousness convinces it that it serves a much greater purpose to the narrative than it actually does. The dream ballet occupies a position of honor in movie musical history: films like Oklahoma, Carousel, Seven Brides for Seven Brothers, and even The Big Lebowski have their own versions (some used to better effect than others.) But as Melissa in Schmigadoon!, a recent send-up of classic movie musicals, says of the dream ballet, “nobody likes them and they slow everything down.” You can’t say fairer than that.

The Fragility of Unbreakable

Caught in a Bad Romance: The Wacky Incest of Chances Are

Bombshell and the Exploitation of Young Starlets

Fatal Attraction and the Feminist ‘Backlash’

The Horror Of Blade Runner