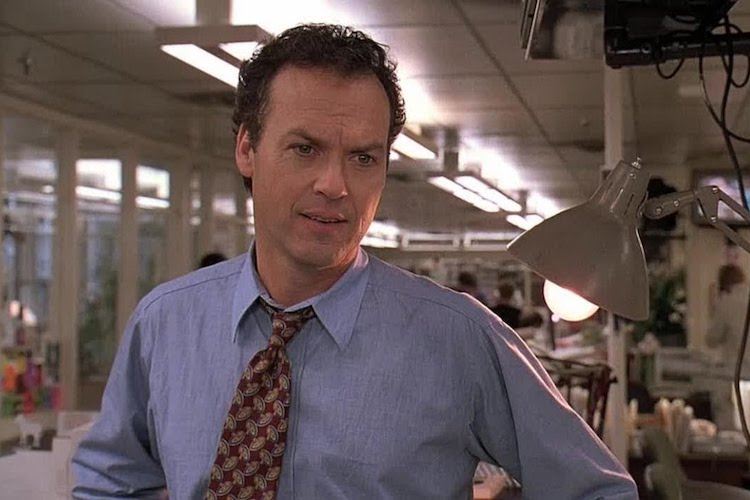 The first image in Ron Howard’s 1994 film The Paper is of gears turning inside an alarm clock. It’s a disorienting start to a movie that’s supposed to be about newspapers. It’s also a signal that this movie (released 25 years ago this week) is as obsessed with time as its characters are with getting a leg up on their competition.

Time is a fixture from this film’s first frame, and it’s inherent to the story the film tells, which takes place over the course of a single day. It follows the staff of The New York Sun, a trashy tabloid heavily inspired by New York City’s actual trashy tabloids. The world of that paper is as sensational as the stories it prints. Crazy things just keep happening. Over the course of the movie, Alicia, the managing editor played by Glenn Close, attempts to negotiate a raise for herself, has a physical altercation with one of her employees, and is shot in the leg. She’s not even the main character.

That honor goes to Michael Keaton’s Henry Hackett, the paper’s metro editor. Henry has a very pregnant wife, a job opportunity at a much classier paper, and very little interest in either of those things. Instead, he spends his day chasing down a story about a shooting in Brooklyn that’s been blamed on two young black men. He hears that the arrest is a sham, and wants to get confirm it before any of the city’s other papers get a chance to.

— The Paper only opened on five screens (and did very well) before expanding wide the next week. The wide releases it opened against were The Naked Gun 33 1/3: The Final Insult and something called Monkey Trouble, in which young Thora Birch gets a monkey for a pet. Harvey Keitel is also in it, obviously.

— The Oscars for the previous year’s movies were held three days later, with Schindler’s List mopping the floor with everybody.

— South Africa was just under a month away from having its first fully multiracial elections, marking the end of apartheid and the election of Nelson Mandela as president.

— CBS was having a good month. The network’s coverage of women’s figure skating at the Lillehammer Olympics on Feb. 23 — you know, the one with Tonya Harding and Nancy Kerrigan — was one of the most-watched sporting events in TV history. And on March 31, Madonna would make her infamous, expletive-laden appearance on David Letterman, resulting in high ratings for Dave.

— Turner Classic Movies was less than a month away from launch, and Fox’s FX would be six weeks behind it. DirecTV was about to start, too.

— Ellen DeGeneres’ self-titled sitcom (the one on which she would later come out of the closet) was set to debut in a week.

— The #1 song in America was “The Sign” by Ace of Base. Other hits you might have heard on the radio on your way to the theater included “The Power of Love” by Celine Dion; “Without You/Never Forget You” by Mariah Carey; “Whatta Man” by Salt-N-Pepa w/ En Vogue; “Bump N’ Grind” by R. Kelly; and “Mmm Mmm Mmm Mmm” by Crash Test Dummies.

The Paper doesn’t take place in the real world. As Henry screams through the phone at an editor from the glitzier paper uptown, it takes place in “f***in’ New York City, so go f*** yourself.” The world of this movie, and its version of New York City, is grimy and dingy and full of life. The Paper’s pace is frenetic, and its vibe is outlandish. On the surface, it’s entirely unrealistic. For one thing, Henry Hackett appears to get about two hours of sleep a night. For another, his wife just happens to require a C-section at the very moment he’s breaking through on the story. It’s all very convenient, hand-wavy movie logic. Things are more exciting if they all happen at the same time over the course of one day!

Despite its lack of interest in subtlety, The Paper does something that few other journalism movies dare to do – it delves into the personal lives of its reporters. In All the President’s Men (1976), Spotlight (2015), and other more high-brow movies about journalism, the journalist’s job is their whole life. In The Paper, that’s still the case, but it comes with collateral damage. Henry’s pregnant wife Martha, played with a verve to match Keaton’s by Marisa Tomei, spends most of the movie terrified that she’ll never see her husband again once she has the baby. Henry’s mentor Bernie, played by Robert Duvall, has prostate cancer and a daughter who refuses to speak to him.

The manic, deranged energy of the goings-on at The Sun is complemented by reminders that there are consequences to the way these people are obsessed with their work. Because the movie is unafraid of having six people in a room discussing five different plot strands over one another (which happens), it offers a much more chaotic look at the life of a journalist than most movies on the subject. That scene ends when a columnist fires a gun into a stack of papers, the same gun that will eventually put a bullet in Alicia’s leg.

The Paper is admirable because it doesn’t even attempt to feign realism. Michael Keaton completely loses his mind in three separate scenes, and the movie barely bats an eye. It’s telling that more than 20 years later, Keaton would play a much more reserved version of this character in Spotlight. In that film, he’s wizened and solemn. He’s carrying the burden of the work his reporters are doing. In The Paper, Keaton’s flailing and screaming. Both characters feel like people you might meet in a newsroom, but they don’t feel like the same guy.

Keaton is perfectly matched by Howard’s direction, which features a constantly moving camera, and seems to delight in the sweatiness of all the film’s characters (the A/C in The Sun’s office is also broken). The sheer energy of the film is intoxicating, and it allows it to get at why journalists do what they do.

“We don’t get the money,” Duvall’s Bernie tells Close’s character halfway through the film. Journalists don’t get the glory or the fame or the glamour. They do the job, The Paper seems to suggest, because they have some sort of compulsion. For Henry, it’s a desire to prove that a trashy tabloid can get better scoops than its much classier counterpart without printing lies. Even Martha, who’s eight-and-a-half months pregnant, tracks down a lead while she’s out on maternity leave. These people can’t stop reporting.

By setting the movie on a single day, The Paper also works to remind us that this day, while extraordinary in some respects, is also not that uncommon. These people work all the time, and wouldn’t have it any other way.

The events in The Paper mirror the experience of reading The New York Sun. It’s strange and exaggerated, but buried in it is a nugget of truth. Although Henry’s primary motivation seems to be to prove his paper’s worth, he’s also insistent that The Sun has never printed anything they know to be false. If they print a headline suggesting those two black men committed the crime, when Henry knows they didn’t, that will no longer be true.

All of this is exaggerated. Reporters don’t work 21-hour days that regularly. They don’t scream at editors from the world’s largest paper either. There are probably two fewer gunshots and one less dramatic birth on a typical day too. The Paper is much more like a headline that reads “Gotcha!” instead of “Two Arrested in Brooklyn Shooting.” The Paper is the New York Post to All the President’s Men’s New York Times. It revels in its trashiness, unafraid of earning a little bit of a reputation. Much like a tabloid though, it has some worthwhile truths buried inside it, ones that you might not even find in a film that has a little more class.