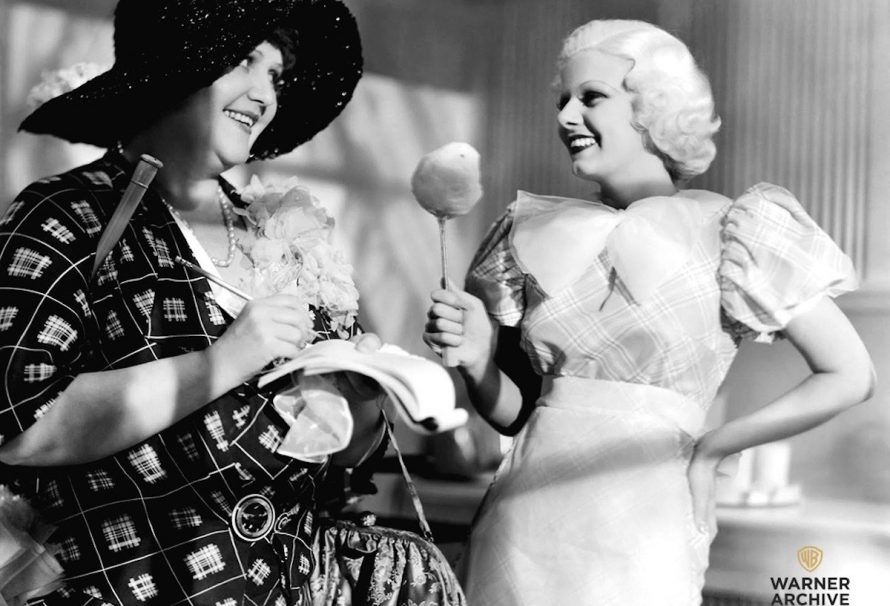 As soon as there were pretty young actresses and singers in Hollywood, there were people waiting in the wings to take advantage of them. The exploitation of women, especially those on the cusp of teenagedom and young adulthood, has always been prevalent in the entertainment industry but we’ve only recently seen a larger societal reckoning that examines the problematic ways that the Britney Spearses of the world (and, in the case of classic Hollywood, the Jean Harlows) were treated by their studios, the press, and even their fans. What we see today from former teen stars finally getting justice for how they were treated at the peak of their fame is, in many ways, an echo of Bombshell, a pre-Code comedy that shines a light on the exploitation of the movie star. It also serves as an unofficial autobiography of Jean Harlow, one of Hollywood’s earliest starlets who faced endless manipulations by the studio machine before her tragic death at age 26.

The 2000s don’t feel that far in the past, really. Most of us who are of a certain age require constant reminders that 2000 was, in fact, over two decades ago. But in watching interviews on the Late Show with David Letterman or reading copies of Rolling Stone from that period, it’s shocking at how much abuse young, vulnerable actresses were expected to take from the media within our own lifetimes. There’s an unsettling, leering quality to the way that the press interacted with young starlets of the time, largely indicative of an industry dominated by straight white men who were never taught to question their own misogynistic tendencies.

The countdowns to a teen star’s 18th birthday that were so prevalent at the time are a perfect example. They imply that, while these full-grown men had probably been fantasizing about said actress since she was 14 or 15, they wanted to celebrate the official date that they no longer had to feel gross about it. These girls were treated like sex objects and then ridiculed for it; many developed unhealthy coping mechanisms and were blamed for that as well. Stripped of their own agency by predatory parent managers, as was the case for Britney Spears and Lindsay Lohan, they were exploited by the people who should have been taking care of them, and it’s only now that their legacies are being reevaluated.

We can see exactly how long that sort of behavior has been common in Hollywood by taking a look at Bombshell, directed by Victor Fleming in 1933 for MGM. It stars Jean Harlow as Lola Burns, a young starlet who carries the weight of her entire family’s fortune on her back, and is constantly being manipulated by the opportunistic machinations of Space Hanlon (Lee Tracy), the publicity man for her studio. She spends every day of her life hounded by men: her father, who uses all of her money to pay for his horse-breeding hobby; her director, who seems to believe that she owes him her attention and gets jealous whenever she spends time with another man; an aggressive stranger who repeatedly approaches Lola at the studio insisting that he’s her husband. When she refuses to allow Space into her dressing room, he disregards her and sticks his head through her window while she’s half-dressed anyway. Everyone who is close to her is there not because of who she is as a person, but because of what she can do for them.

Space is the worst offender. As the studio’s publicity man, it’s his job to keep Lola in the news, regardless of how his stories affect her personal life. If there isn’t anything salacious enough for him to leak to the gossip magazines, he simply makes something up. After orchestrating a brawl between her director and her boyfriend with a crowd of paparazzi to witness, he costs her the opportunity to adopt a baby boy that she’s fallen in love with.

In Bombshell, her desire to be a mother is treated as a passing whim, just another thing that she’s interested in that particular week, but all the same, his interference is an assault on her ability to act independently and have agency over her own life. Indeed, he flies into a rage at the idea that she should be upset over all the unflattering coverage he’s gotten to hone her image as the “Blonde Bombshell.” His anger is rooted in misogyny. Space takes a perverse sense of pleasure in bringing Lola down, bending her to his will, because she’s a wealthy woman who could assert her own power if he wasn’t around to pull the strings. He has to amplify his role in her success, because his ego can’t handle the idea of her making it on her own.

This one final sabotage is what pushes Lola over the edge, leaving Hollywood all together in favor of a desert retreat, but not before delivering a monologue to her family, household staff, and her publicist that sums up the entirety of the film:

“Oh get away from me, all of you! You’re nothing but a pack of leeches! I’ve only stood it because it’s the only home and family I’ve got, but I’m getting sick of it. There’s only Loretta and the dogs that ever do a single thing for me. All the rest of you are just out for what you can get! And I’m getting pretty tired of being a golden goose or whatever you call it. A glamorous bombshell, eh? A glorified chump, that’s what I’ve been. Well I’m through, do you understand? With the business, with everybody! And you can all stay here in this half-paid-for car barn and get somebody else to pull the apple cart. I’m going where ladies and gentlemen hang their hats and get some peace and quiet!”

This is the 1933 version of saying, “screw everything,” and shaving your head. The language may have changed, but the sentiment is clearly the same. This is the moment in any young starlet’s life when the pressures start to be just too much. When the press become vultures, hovering around her Hollywood estate aided and abetted by merciless publicists, she can’t trust her family not to steal from her, and she’s powerless despite all of her wealth and fame. So she snaps. And somehow gets blamed for it.

Bombshell is a work of fiction, but it clearly had its roots in Jean Harlow’s real life. If nothing else, she over-related to the character she played in it. Like Lola, she was at the mercy of a parent who eagerly exploited her: Jean Harlow’s mother was by all accounts incredibly domineering. She started working in Hollywood not because she necessarily wanted to, but because her mother had dreamed of being an actress and wanted to live vicariously through her. Jean once said privately, “Nothing on earth is worth what I go through when I don’t let her dominate.” When Jean became pregnant by her first husband, her mother convinced her to get both an abortion and a divorce — a baby would get in the way of her Hollywood career, and her husband wasn’t thrilled about the idea of his pretty young wife being ogled by millions of adoring fans.

After she got her start with Howard Hughes and later became one of MGM’s leading ladies, the studio got to work carefully constructing her persona. Since so many of her characters were considered morally objectionable in one way or another, it was important to the studio that there be a clear distinction between Harlow and the roles she played. They arranged endless publicity tours and photos of her doing charity work. When her second husband died under mysterious circumstances (it was eventually ruled a suicide), her studio was called before the police, so that they could do damage control and mitigate the effects of a scandal. When she became involved with married boxer Max Baer and her name came up in their divorce proceedings, MGM even pressured her to hastily marry cinematographer Harold Rosson, a union that lasted all of eight months, hoping it would take some of the heat off her. Jean was not under lock and key, by any means, but whatever she may have wanted to do in life was heavily curtailed by her domineering mother and the all-powerful studio she worked for. Just like her character Lola, the press was lying in wait around every corner, hoping for another salacious scoop from Hollywood’s Platinum Blonde.

Harlow died suddenly at 26, suffering from kidney failure brought on by a series of illnesses in her teen years and young adulthood. If people remember her today, it’s because of her iconic blond hair and dramatic eyebrows, further testament to Hollywood’s tendency to view her (and other young actresses like her) as merely a sex object. She didn’t live long enough to see the people who exploited her chastened in any way – or indeed, to experience a culture that recognized the treatment she experienced from her mother, her studio handlers, and the press as abuse. But it’s vindicating that finally, actresses like Jean Harlow have better tools with which to draw boundaries, and aren’t being punished for it with derision from the masses.

In Praise of The Catered Affair, the Best Bette Davis Performance You Probably Haven't Seen

Classic Corner: She Done Him Wrong