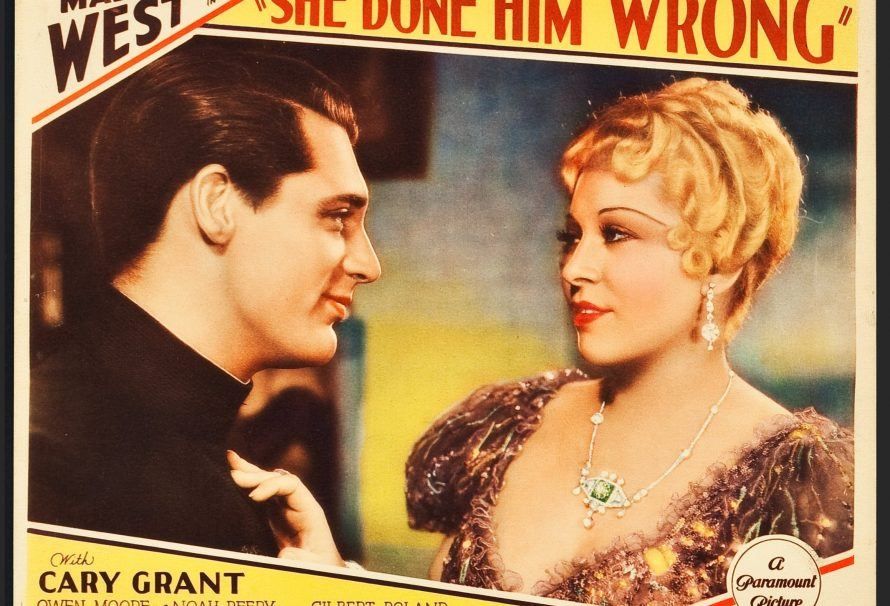 Mae West doesn’t appear until the ten-minute mark of her first starring vehicle, 1933’s She Done Him Wrong, which is a pretty late entrance for a picture that runs barely over an hour. But it is one well-prepared entrance, and complaining about it is something akin to moaning that The Third Man takes too long to bring in Harry Lime – because in both cases, they’re the primary topic of conversation until they arrive.

In this case, all the rhapsodizing dialogue about her character “Lady Lou,” – “the swellest girl who ever came down the Bowery,” the men fawning over her beauty, the reactions to a painting of her visage in the neighborhood bar – have an extra delicious kick, because West wrote so much of it herself. She Done Him Wrong was based on her notorious 1928 Broadway play Diamond Lil, though screenwriters Harvey F. Thew and John Bright, and their bosses at Paramount, had to do a fair amount of rewriting (and some outright subterfuge) to get the picture into production; there were loud objections from the censors at the Hays office, even in this relatively lax, pre-1934 period (often referred to, inaccurately, as “Pre-Code” – there was a Hays Code, it just wasn’t strenuously enforced).

The Hays office was against the mere idea of a film adaptation of Diamond Lil, so synonymous was the play with sin and vice. The screenwriters, along with director Lowell Sherman and producer William LeBaron, dutifully changed the title and a few of the more objectionable elements, but left most of West’s charged double entendres intact, and thank goodness for that. The setting is New York’s Bowery area and the time is the “Gay ‘90s” (as in, 1890s), back when the Bowery was still associated with pleasure and fun, rather than danger and poverty. We’re introduced to the scene via a montage of drinking, revelry, and more drinking, including the first gag in the movie: a horse manure joke. West never pretended to be above an easy laugh.

And in She Done Him Wrong, she’s a pistol. In her first scene, she’s introduced to a young woman who beams, “I have heard so much about you,” to which West replies, “Yeah, but you can’t prove it!” The film is filled with those winking retorts to innocent questions; my favorite may be, to the question of if she’s ever met a man who could make her happy, a loaded “Sure. Lotsa times.” A young and sexy Cary Grant is the willing target of her most well-aimed lines, including the  picture’s most oft-quoted one: “I’ve always liked a man in uniform, and you fit that one just grand. Why don’t you come up sometime and see me?” Grant is the do-gooder director of the city mission next door and he’s more than a little judgey – late in the movie, holding a pair of handcuffs, he insists “a lot of men would’ve been safer” if she wore them, to which she purrs, “I dunno, hands ain’t everything.”

It’s not just the things she’s saying, of course; it’s how she says them, with that voice, that inimitable (and somehow also oft-imitated) voice, dripping with honey and whiskey and sin. What’s fun about West, particularly at this early moment in her film career, is how she’s playing these scenes on two levels – they play as sexy, because she’s plainly that (Edith Head’s costumes in this film are possibly the most flattering of her career), but also as a broad caricature of Roaring ‘20s sexuality, a parody that also works as the genuine article.

The richness of the West character – who is, let’s face it, always a version of West herself,  – is especially clear in her three musical numbers. She doesn’t just sing these saloon songs; she doesn’t have much of a “singing voice,” per se. But those numbers play like gangbusters, because she performs them, and it’s a performance full of echoes and homages, deeply steeped in burlesque shows, blues music, black culture, early drag culture, and general transgressiveness. (The influence, and to some extent appropriation, of black music further complicates the scenes with Louise Beavers as Pearl, her Black maid – which are hard to watch in either case.)

Mae West arrived in motion pictures at exactly the right moment. Paramount Pictures spent the early 1930s building screen vehicles for performers like West, W.C. Fields, and the Marx Brothers, all of whom had spent the past decade (or more) perfecting their distinctive comic personae in Broadway plays, New York revues, and on the vaudeville and burlesque circuits, and arrived on  silver screen with personalities, gags, and styles fully intact. West arrived right on time at Paramount but her reign as queen was short. She Done Him Wrong was a box-office bonanza, and its grosses were topped by her follow-up I’m No Angel later that year. But by 1934, the Hays Code was in full effect, and she spent the rest of the 1940s fighting with the censors, with only a series of softened vehicles to show for it. Many of those films are fine, enjoyable even. But only She Done Him Wrong and I’m No Angel give us the pure, uncut West – or, as close to that as the “Pre-Code” era would allow.

“She Done Him Wrong” is streaming as part of the Criterion Channel’s “Best of Mae West” program.

Nothing Good Happens After 2 AM: Paul Schrader's Light Sleeper