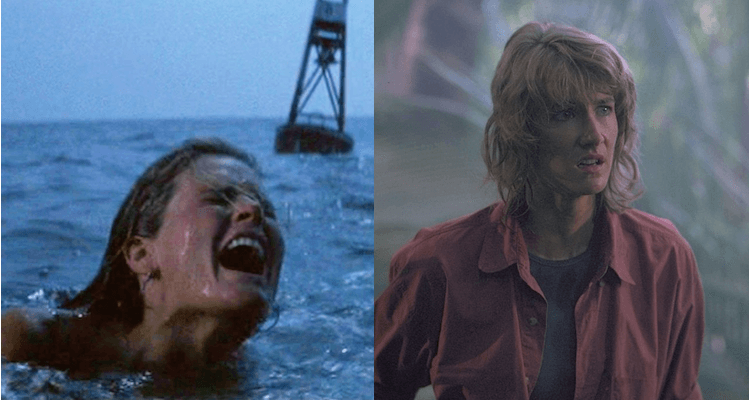 I love rewatching my favorite movies. When you sit down to view any film, you approach it with your own experience and meet it in the middle. Then, over time, you change and your viewpoints change and you can derive and add new meaning by rewatching something that, unless George Lucas was involved, hasn’t changed at all.

That gives us the opportunity to look back and see what’s changed in the meantime. We can see some distinct differences between two great American classics, Jaws (1975) and Jurassic Park (1993), both in Spielberg’s approach and in the way we personally and collectively read his works in retrospect.

Jaws starts with this scene. The film was edited by the incomparable (and female) Verna Fields. (You could learn more about editing and pacing from the first five minutes of Jaws than I’ve learned in entire semesters of editing courses.) It’s difficult to imagine a more invasive view than the underwater perspective shot of poor nude Chrissie. She’s naked and drunk, which serves multiple purposes: it draws in male viewers to be titillated by the view, but it also effectively blames the victim. It’s hardly even a metaphor for rape — this scene is essentially a depiction of the act itself. It’s unrelenting; it’s shocking; it’s horrifying and prolonged. When the attack is over, we’re left with devastating silence.

We then see scene after scene where the shark attack is denied, explained away, justified, and ignored. Brody is convinced a predator is on the loose, but the girl was probably drunk and probably got hit by a boat. No reason to cause a panic. Chief Brody, a newcomer to Amity Island, allows himself to be slowed by the criticism, bowed under the weight of his new duties. His political clashes slow his response, up until the next attack.

This leads to the critical feminist point of the film, when Mrs. Kintner confronts Brody at the pier for his inaction. This scene is the one moment in the film where a woman is neither a helpless mother nor a helpless wife. She walks onto a dock full of men celebrating the death of the wrong shark and confronts patriarchy with an open hand.

While this is a redeeming moment for Mrs. Kintner and a turning point for Brody, it is not quite a redeeming moment for Spielberg. It doesn’t make up for the childish voyeurism or the passive and sparse female characters. Ellen Brody, our protagonist’s worried wife, exits the frame in tears at around the 60% mark after telling her husband she packed his socks, and the only women mentioned after that are ye fair Spanish ladies.

Jaws is a masterpiece; it’s a product of its time; it’s brilliant, groundbreaking, pulp cinema with depth. It’s one of my favorite films of all time. It’s also not perfect. There’s only one perfect film, and that’s Herbie Fully Loaded. Jaws could never be perfect to every person because we approach films with our own perspectives. If you’re a woman, you’ll see a different film than a man sees. It’s unavoidable.

As has been beaten into the ground by now, any feminist analysis of Spielberg’s works has to take into account the serious lack of female representation in general. But we shouldn’t dismiss any film just because of its apparent lack of progressive perfection. There’s interesting stuff to be learned through others’ shortcomings, especially such beautifully executed shortcomings.

Spielberg knows he was young and foolish. He was 27 and unmarried, making a movie on a famously disastrous production schedule. Just a couple years after its release, in fact, he’s quoted as saying, “I have very mixed feelings about my work on that picture, and two or three pictures from now I’m going to be able to look back on it and see what I’ve done.” He later said in an interview for Jaws’ home release bonus features, “When I first hear the word ‘Jaws,’ I just think of a period in my life when I was much younger than I am right now and I think because I was younger I was more courageous. Or I was more stupid. I’m not sure which. So when I think Jaws I think about courage and stupidity. And I think about both of those things existing underwater.”

But the film is what it is. You can’t change it; you can’t determine how people will receive it. You can just make another film. Which, of course, he did. A decade and a half later, married, with kids, Spielberg remade the quintessential monster movie with different priorities.

Jurassic Park has many things in common with Jaws. There are scenes and beats recreated throughout the two films that stand out when watched together. There’s a hint of the monster’s arrival — a ripple in the water. There are beautiful, dimly lit contemplative moments around a dining table. There are detached limbs, and men with funny accents who get eaten.

It’s also easy to see some of the ways Spielberg learned from his experience with Jaws. One of the most obvious ways is in withholding the reveal of the monster until you’re begging to see it. With Jaws, that was a necessity: it was an improvised strategy to cover for malfunctioning robotics. With Jurassic Park, it was intentional. It worked so well the first time and it works again. There’s a joke, a laugh to get you off your guard, and then the monster is there in plain view.

Other similarities are thematic. They both deal with the hubris of man thinking he can resist the ferocity of nature through sheer will, and the men who are destroyed because of it. But they also diverge here. Jurassic Park jumps from this point but also seems to make a statement about men specifically, not mankind in general. Dr. Ellie Sattler (Laura Dern) drives it home with her response to Ian Malcolm (Jeff Goldblum):

Jurassic Park’s first victim is a male park worker who was killed because of the park’s lax stance towards safety. Jaws’ first victim is a nude female. Granted, the shark in Jaws spends the remainder of the film attacking male victims, but in Jurassic Park, there are no female characters killed. Rather, the female characters, while still sparse, have prominence in the story, being the figures who at nearly every turn make the decisions to bring the park back online. Timmy and Lex got gender-swapped from Crichton’s source novel, putting Lex as the older sibling, computer-savvy and protective. Dr. Sattler is fierce and wise, feminine, motherly, and solution-oriented. And, of course, the dinosaurs are all female.

Change is unavoidable. All of us change. Viewers change. Filmmakers change. That’s a really good thing. It’s good that none of the work I produced at age 27 will ever be as widely scrutinized as Jaws, but that’s the double-edged sword of creating a pivotal piece of art. (Nobody’s dissecting the feminist values of Baby Geniuses.) Spielberg didn’t turn from a talented scoundrel to a perfectly progressive inclusive icon in the years between Jaws and Jurassic Park, or in the years since, but when comparing the two there is a distinct change in perspective. Those films, prominent and pervasive, stand as touchstones in popular and personal history where we can measure our growth against them.

Daxson Hale lives in Provo, Utah, where people are named things like “Daxson.”